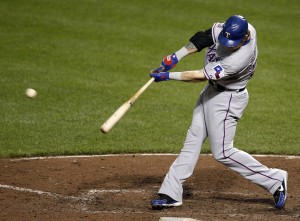 Josh Hamilton hits one of his four (AP).

On Tuesday evening in Baltimore, the Rangers’ Josh Hamilton went 5-for-5 with a double and four home runs. Whenever a batter hits four in a game, I always flash back to a time when baseball was smarter and such rare feats were even rarer. Specifically, I think of June 3, 1932, a day on which the Yankees were visiting the Philadelphia Athletics in hitter-friendly Shibe Park. In that day’s game, Babe Ruth hit a home run, but that was just ho-hum, a typical day for the Bambino. Gehrig showed him up for once, going 4-for-6 with four home runs and six RBI.

The A’s starter that day was George "Moose" Earnshaw, a three-time 20-game winner whose style was generally summed up as, "Here’s my fastball, now hit it." Gehrig hit it, as did Tony Lazzeri and Earle Combs, who also joined Ruth in hitting single round-trippers. The Yankees needed the runs—rookie starter Johnnie Allen had one of the few truly rough days of his prime (in his first seven seasons in the majors, Allen, a late bloomer found working as a bellboy by a scout, went 99-38), and the Yankees won the game 20-13.

I quite enjoy the New York Times description of Gehrig’s feat:

Henry Louis Gehrig’s name today took rank in baseball’s archives along with Bobby Lowe and Ed Delahanty, the only other sluggers who, in more than half a century of recorded diamond battles, ever hit four home runs in one major league game.

Okay, Ed Delahanty I know, everyone knows. He’s the turn-of-the-20th century Hall of Fame outfielder who was put off a train, drunk and disorderly, near Niagara Falls, and wandered off a bridge, an act that, even today, will get you placed on the permanently ineligible list. But Bobby Lowe? Who the heck is Bobby Lowe? 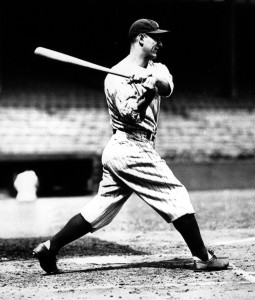 Well, Bobby Lowe was the first player to swat four home runs in a game… and that was pretty much it. He was a contemporary of Delahanty’s, mostly played for the Boston version of the team we know as the Atlanta Braves, did his home run hitting in 1894, a huge offensive year for the National League. Overall, though, he wasn’t much of a hitter. He was a longtime gloveman at second base who sometimes hit, kind of like Orlando Hudson. In his Historical Abstract, Bill James notes that it was only 250 feet to left field at Boston’s South End Grounds, and of Lowe’s 17 home runs that year, he hit 16 at home.

The famous kicker to the Lou Gehrig four-homer story is that he nearly hit a fifth, something no one has ever done. Back to the Times:

Gehrig in his first four times at bat hammered the ball outside the playing area. In the first and fifth innings he sailed balls into the stands in left center. In the fourth and seventh he fired over the right-field wall… The crowd of 5,000 seemed to concentrate on encouraging Gehrig to hit a fifth homer and thus surpass a brilliant record in baseball’s books.

Lou had two chances. He grounded out in the eighth, but in the ninth he pointed a terrific drive which [future Hall of Famer Al] Simmons captured only a few steps from the furthest corner of the park. A little variance to either side its actual line of flight would have sent the ball over the fence or into the stands.

In some tellings of the story, Simmons caught the ball at or over the wall, robbing Gehrig. This eyewitness description would suggest that some hyperbole has come into play over the years.

Sixteen players have now done the deed, including Hall of Famers Chuck Klein, Willie Mays, and Mike Schmidt. The name you will hear most often in association with Hamilton’s home runs is that of Joe Adcock of the Milwaukee Braves. Playing at Ebbets Field in Brooklyn in 1950, the slugging first baseman did what Mickey Mantle only boasted of doing in that park (he said he would have hit a thousand home runs playing in Ebbets every day) setting a single-game record for total bases with four home runs and a double. Hamilton matched it tonight.

Hamilton is Still a Risk
The ironic aspect of Hamilton’s hitting—he’s now hitting .406/.458/.840 in a year in which pitching seems to be ascendant—is that it doesn’t change much about his impending free agent case: he’s still a bad idea given the lengthy contracts that top-tier free agents currently command.

Prior to the start of the season, I wrote a story on another site titled, "The Rangers shouldn’t sign Josh Hamilton—and Neither Should Anybody Else." This was an exaggeration, but not by much if we’re talking five or more years for a slugger who is fragile in more ways than one:

Since finally making it, he has often played excellently, but as is to be expected, has struggled with his addictions and has sometimes suffered relapses, most recently this offseason. Addiction is a disease, and Hamilton should not be condemned for his struggles, but these issues do make re-signing him a riskier proposition than it would be for another player of the same age.

However, there is a greater issue in re-signing Hamilton than addiction. Hamilton has had five trips to the disabled list in five seasons and had eight interruptions of play lasting at least 15 days. He has fractured his arm and his ribs, suffered a sports hernia, injured his shoulder diving for a ball. He plays all out on defense, and the Rangers’ inability to find a regular center fielder has meant that they repeatedly put Hamilton at that stressful position. He may not be able to handle the additional mileage. We also have to consider his substance abuse problems in a different light: what if his body is fatigued in ways that we just can’t see? What is the physical toll of abusing your body with drink and drugs?

Consider the going contract length for a player of Hamilton’s abilities. A Prince Fielder-style contract would tie Hamilton up until he turned 40, but no one can say how much time he has left as an elite player, or how many more times he will play more than 120 games in a season. Forget nine years, five years might be a risk. Three years might be a risk. Yet, we know someone will gamble, someone will give in and spend so much over so long that even if Hamilton remains sober (fondly do we hope and fervently do we pray that he does), they will surely get burnt by his fragility.

…Hamilton’s hitting ability is not in doubt. The runs will be there on the scoreboard. As with Fielder and Albert Pujols, the short-term benefit is real and inarguable. Hamilton (and his agent) will drive a harder bargain than that, though, and so acquiring him entails real risk. The Rangers know better than anyone else what that means, and if they hesitate to prevent Hamilton from testing the free agent waters, possible buyers should take that as a clue that they should temper their enthusiasm and bet the under in terms of years.

Turns out I was wrong about Pujols, at least for the time being. Otherwise, I stand by the analysis, and will continue to do so even if Hamilton has another ten four-home run games this season. I hope he does, and I hope he proves me wrong, just as I hope Pujols proves me right about short-term value, or any value at this point.