Mariano Rivera: Why the Yankees Will Survive His Loss

Share All sharing options for: Mariano Rivera: Why the Yankees Will Survive His Loss 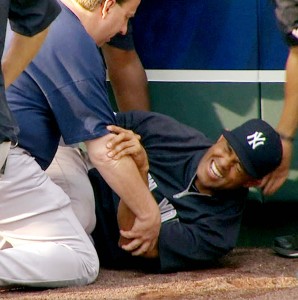 Mariano Rivera: A sad day, but a survivable one.

Asked tonight how the possible loss of Mariano Rivera altered his bullpen, Joe Girardi replied, "You lose a Hall of Famer." Emotionally, it’s a devastating blow in terms of confidence, gravitas, pride, and most of all, sentiment: one of the greatest pitchers of all time has possibly been lost, not just for today and tomorrow, but possibly forever. This is one of those times when the usual dichotomy between fan reaction and team reaction ceases to exist: Rivera is one of the most admired figures in baseball, both on his team and off, and for both teammates and those of us who have admired him throughout his career, this moment is truly one of sadness. However, "sad" does not equal "important" in pure baseball terms.

Let’s add a short phrase to the descriptions given above: Yes, Rivera is a Hall of Famer and one of the greatest pitchers of all time, but both of those phrases require this qualifier: "in his niche." He is one of the greatest pitchers of all time in his niche. That niche, closing, has been given a lot of exaggerated importance because of the saves rule and the persistence of the idea that losing a game in the ninth inning is somehow worse than losing it in the first inning, or the third, or the fifth.

Rivera has, of course, been exceedingly valuable to the Yankees, not because he was saving games, but because he was pitching scoreless innings, and doing so more consistently and reliably than any other reliever in history, be it setting up or closing, regular season or postseason. We can and should give him credit for pitching in pressure-filled situations, but even then, the value is in the scoreless inning, not in the save—the difference between Rivera’s saves conversion rate and that of the typical closer is unremarkable.

Let me pause to boil that down: Rivera is a Hall of Famer because he gets outs, because most relievers, including closers, have very short career peaks and are not reliable from year to year; he has been the most reliable pitcher of all time. The saves, the ninth-inning stuff, it’s the smallest part of his value.

As Rivera has aged, even the value of what he does has been somewhat diminished by the Yankees’ reluctance to deploy him unless the situation met a very narrow definition of acceptable use. Look at Rivera’s innings over the last five seasons (2007-2011):

Rivera’s participation has been dropping steadily. Even if you think the ninth inning is SUPEREXTRAVALUABLE compared to the rest of the game, Rivera gets a tiny portion of the Yankees’ outs each year, leaving the rest of the staff to retire more than 1350 innings’-worth of batters. Ask yourself this question: shouldn’t an organization, especially a good organization, be able to replace four percent of their total innings for a season? CC Sabathia goes down, you’re talking more than 15 percent. That’s a tall order. But four? And if the literal replacement won’t be pitching the ninth inning but in other spots theoretically less SUPEREXTRAVALUABLE?

We can take things a step further: Over the last five seasons, Rivera has made 322 appearances and pitched 329.2 innings, so basically, you’ve got a ratio of 1:1 there—one inning a shot. According to Baseball-Reference, 202 of those appearances, or 63 percent, have been of the high-leverage variety, which is to say that the game was truly at risk. They required a pitcher of Rivera’s talents. That means that 37 percent of his remaining appearances were of medium- or low-leverage. Less was at stake, and we could have expected most pitchers to perform adequately in those situations, getting three outs before three runs scored, or whatever the game required.

Parenthetically, that breakdown is not on Rivera, but on his manager. Using a pitcher to the saves rule means wasting the pitcher a good portion of the time. Think of that breakdown in terms of innings. Rivera has been averaging 66 innings a season. Of those, 42 were worthy of his skills and 24 were not. With that in mind, let’s look at the innings percentage table again:

That’s it. That’s Rivera’s total contribution that actually mattered—roughly three percent of the team’s total innings. Now, a lot of things could sink the Yankees this year. It could be lack of depth among the position players is exposed by injuries, or the starting rotation being less effective than anticipated. It could be that an offense in which the average player is 33 years old proves to be not only fragile but disappointing. Someone could confuse Eduardo Nunez with an everyday player. Any or all of those defects might do the trick. But:

No matter how beloved Mariano Rivera is (not least by me), no matter how great he has been at what he does, if a team can’t find a way to reassign 39 innings out of 1450, it wasn’t going to win anyway. This is a sad day for the Yankees and for baseball, but it’s impact on the winning effort should be minimal.