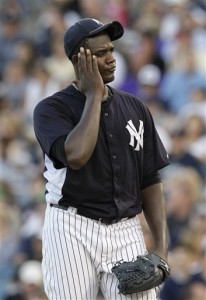 Even if Michael Pineda is seriously injured, it's too early to judge the blockbuster deal. (AP)

While we await word on the second opinion regarding Michael Pineda's shoulder, certain corners of the baseball world are already rushing to judgment. Today, Fox Sports' Jon Morosi declared the Mariners the "early winner" of the January deal that sent Jesus Montero and Hector Noesi to Seattle in exchange for Pineda and Jose Campos. Earlier today, I exchanged barbed tweets with Morosi, who reasoned. "This is one early snapshot of the trade. It’s like the top of the second inning. The score, while not final, still matters."

Montero is hitting all of .254/.270/.336 for the Mariners in 63 plate appearances. He has two homers, but also just two walks against 11 strikeouts. That stellar line has been worth −0.1 WARP — worse than replacement level, in other words. Noesi, meanwhile, has been tagged for a 9.49 ERA in 12.3 innings over three starts, worth −0.2 WARP. Neither Pineda nor Campos, who's 19 years old and still in A-ball has yet to appear in a regular season game. If the Mariners are winning this deal on that front, they're doing so via a very counterintuitive means, because being below replacement level (and they are according to other WAR-based systems as well) is definitively going backwards.

Let's do some quick math. Coming into the season, the Yankees had five years of remaining club control over Pineda, and six years of such control over Campos, six years on which the clock won't even start until he reaches the majors (if he ever does). For purposes of simplicity, we'll forget the latter for the moment. The Yankees have played 17 out of 162 games this season, 10.5 percent of their schedule, and 2.1 percent of their schedule over the next five years, the span during which they have control over Pineda.

The average major league game in 2011 lasted 291 pitches between the two teams. If we're mapping Pineda's tenure to a major league game, we're at 2.1 percent of 291, or 6.1 pitches. Six pitches into a game, folks. Even if you're the Phillies, last in the majors at 3.66 pitches per plate appearances, that's closer to two batters into the game than the top of the second inning. Sure, it's possible to declare a team "winning" by that point in a game; a home run or back-to-back base hits, with one for extra bases, would do the trick. But nobody's breaking out the champagne under such circumstances.

In fact, not only are the Mariners not winning the trade, one can even argue that they're losing — apart from their performances to date — merely by squandering Montero's service time. Coming into the year, nobody expected that the Mariners would contend for the AL West flag or even a wild card spot; they're 8-10 right now, with a −9 run differential (-0.5 runs per game, at this stage, which ain't hay), a PECOTA forecast for a 71-91 season and a 0.6 percent chance of making the playoffs. Therefore, using Montero's service time on such a team is arguably something of a waste. At the very least, keeping him down in the minors during April would have prevented him from gaining a full year of service time in 2012, thus extending the Mariners' club control by a full season, through 2018. Keeping him in the minors until sometime in June or July could prevent him from reaching arbitration eligibility after the 2014 season, granting them Mariners one more year before they have to pay him big money (if he indeed pans out).

Given all of that, it's difficult to conclude that the Mariners are winning the trade. Which doesn't mean that the Yankees are, mind you, not with Pineda possibly looking down the barrel of shoulder surgery. The point is that the jury is going to remain out for a long, long time on this deal; it might be 10 years before Campos completes his club control stint with the Yankees. Any rush to judgment to declare a winner is ludicrously premature at best and intellectually dishonest at worst. There's nothing wrong with keeping an eye on the four players' performances, but there's no reason to slap a label on the proceedings, either.