Loose Threads in the Pinstriped Fabric

Share All sharing options for: Loose Threads in the Pinstriped Fabric 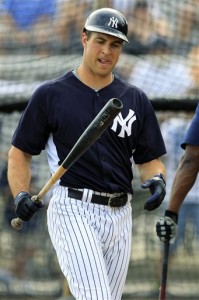 Will Mark Teixeira cut down on the pull-hitting tendency that has eroded his productivity? (AP)

Hola amigos, it's been awhile since I rapped at ya. A whole offseason has gone by, and I kept busy with a winter's worth of projects — JAWS, Baseball Prospectus 2012, Extra Innings, Fantasy Baseball Index, my usual Prospectus Hit and Run column, and ranting like a lunatic about the Dodgers on Twitter — that prevented me from weighing in here. As Steve hinted last week, I'm back in circulation now, and I'll be weighing in at least once a week going forward.

Over the past week at BP, I've explored one nagging question that I have about each team as the season dawns, one loose thread that I haven't been able to resist tugging upon — a question that keeps getting asked of me during season previews, or that I keep asking myself, one that we can't answer right now. I've got more than one for the Yankees, of course. What follows are five that I'm particularly interested in at the moment.

Will Mark Teixeira use the whole field?

Though he clubbed 39 homers, last year Teixeira hit .248/.341/.494, setting a career low in batting average and posting his lowest on-base percentage since his 2003 rookie season. Both of those marks owed something to a career-worst .239 batting average on balls in play, the fourth-lowest among batting title qualifiers, and something that can't entirely be chalked up to luck. Teixeira has developed a pronounced tendency to pull the ball; as Matthew Leach writes at MLB.com:

In both 2011 and 2010, more than half the balls that Teixeira put in play as a left-handed hitter went to right field, according to STATS Inc. His rate was 56 percent in 2010 and 52 percent in 2011. Before then, he'd only had one season in his career where he was that pull-dominated as a left-hander -- 2004, his second year in the Major Leagues.

Teixeira's tendency to pull the ball as a lefty, of course, leads managers to shift their infield defense against him, often putting three fielders to the right of second base, the so-called "Ted Williams shift." Baseball Info Solutions tracks such shifts, and according to their data in the new book, The Fielding Bible III, only seven hitters — David Ortiz, Ryan Howard, Carlos Pena, Adam Dunn, Prince Fielder and Jim Thome — have been shifted against more over the past two years than Teixeira; his ranking is lower than it might otherwise be because he's a switch-hitter who bats righty sometimes, and managers don't shift nearly as often against righties.

Teixeira has been working with hitting coach Kevin Long on hitting to the opposite field this spring. He has no intention of becoming a Punch-and-Judy, and says he'll pick his spots when he tries to go the other way. Not that he's an unproductive hitter without doing so; his .296 True Average last year was still plenty respectable, but he's ranked only 10th among major league first basemen in TAv in each of the past two seasons, down from seventh in 2009 (.322), second in 2008 (.332), and fourth in 2007 (.316). It will certainly be interesting to see the extent to which he changes his approach, and the dividends it pays.

Will Alex Rodriguez return to being a 30-homer threat?

Last year was a disappointing one for Rodriguez, who at the age of 35 set career lows in games played (99) and home runs (16), with the latter total ending his record-tying 13-year streak of at least 30 homers in a season; he shares that with Barry Bonds. Injuries had everything to do with that, of course; Rodriguez missed six weeks due to surgery to repair a torn meniscus, and lost another two weeks' worth of games to a sprained thumb. In and around those injuries, he hit just .191/.345/.353 with three homers in just 84 plate appearances in the second half.

Over the winter, Rodriguez went to Germany to undergo the experimental Orthokine blood-spinning therapy, and other than taking a fastball in the ribs, he has been healthy this spring, swinging the bat well. We don't know how he'll hold up over the course of the upcoming season, but his track record suggests he'll regain his power. Baseball Prospectus' PECOTA projection system forecasts him to hit 30 homers in 585 PA. The ZiPS system isn't so sanguine, forecasting 21 homers in 456 PA, but if you scale that up to the same amount of playing time, that's 27 homers. The CAIRO system, which I was exposed to for the first time while doing my winter work for Fantasy Baseball Index, forecasts 19 in 451 PA, which is about 25 homers in the same amount of playing time. Rodriguez can still be a productive hitter, but he'll have his work cut out to put up the power numbers to which we've become accustomed.

Speaking of becoming accustomed to power numbers, I'm not going to wonder if Granderson can bop 41 again — the aforementioned projection systems average out to 32 — but I do wonder about his defense. Of the four major systems, both Total Zone and Fielding Runs Above Average put him at 13 runs below average, while Defensive Runs Saved places him at −6, and Ultimate Zone Rating at −5, with an average of −9 across the four, almost a full win below average. Granderson doesn't look like a bad center fielder at all, but — hazy anecdotal evidence alert — he did seem to be playing a bit more shallow last season than the year before, with the cost of the balls he didn't get to behind him much higher than if he'd played a few steps deeper and let more singles drop. John Dewan at the Fielding Bible, which uses multiple stringers to review videos in compiling Defensive Runs Saved, had this to say about Grandy's defense in his book:

Curtis Granderson had a down year in the field in 2011 after establishing himself as an above-average fielder in previous years. For some reason, despite elite speed and athleticism, Granderson struggled to make good reads on balls in 2011. He took an abnormally high number of bad routes on flyballs in addition to breaking in the wrong direciton on numerous occasions, costing himself several opportunities to convert outs. On the plus side, Granderson, who has never had a very strong arm, tends to make good decisions with his throws. He was very accurate and kept runners at bay at an above-average rate. Look for Granderson to bounce back in 2012 because he still has the physical skill set to perform at a high level.

I recall seeing Granderson struggle with his routes back with the Tigers towards the end of the 2009 season, when they blew a three-game lead with four games to go and wound up losing a Game 163 play-in to the Twins. It seemed to be one of those "it just happens when I'm watching" things that I know enough not to take too seriously if it doesn't jibe with the numbers from a full season (he averaged around +2.5 across the four aforementioned systems last year). I put more stock in what the FB3 folks have to say given the intensive nature of their review, so I wonder if Grandeson has a vision problem or concentration issues out there or something.

Will the Yankees re-sign Russell Martin?

In his first year in pinstripes, Martin was better than expected, considering he signed after being nontendered by the Dodgers over concerns about his health. Though his .237/.324/.408 line doesn't look like much thanks to an uncharacteristically low .252 BABIP (50 points below his .302 as a Dodger), he hit 18 homers, his most since 2007, and continued to walk at a healthy rate. Behind the plate, he threw out a solid 31 percent of would-be base thieves, and the work of fellow Baseball Prospectus propellerheads Mike Fast and Max Marchi showed that he had a considerable amount of value when it came to pitch framing and pitcher handling, value that isn't captured in more basic WAR/WARP metrics; in fact, he ranks among the game's best.

Martin is making $7.5 million plus incentives (as much as another $100,000) this year, and the Yankees are interested in signing him to a multi-year deal; they apparently offered three years and $20 million this winter, while Brian Cashman was quoted as saying "I would love to have Russell Martin stay." That was before the Cardinals' Yadier Molina signed a five-year, $75 million extension, one that is going to raise Martin's cost considerably. Even aside from the trade of Jesus Montero and the injury woes of Austin Romine, it's clear the team desires an experienced two-way catcher, but it remains to be seen not only whether Martin and the Yanks can find common contractual ground, but whether the 29-year-old backstop can stay healthy and productive for another season given his recent track record.

Will Phil Hughes get his career as a starting pitcher back on track?

With Andy Pettitte working on a comeback — one that provided me with the loose thread that inspired this series over at BP — and Michael Pineda cooling his heels on the disabled list with shoulder tendonitis, the Yankees have intriguing alternatives to the five starting pitchers they'll leave the gate with. The one who has me most intrigued at the moment is Hughes, who after showing up out of shape last spring and suffering through shoulder fatigue and lost velocity, turned in an abbreviated major league season, with a 5.79 ERA in 74.2 innings. The 26-year-old righty came to camp leaner and meaner, and pitched exceptionally well this spring, paying no mind to the circus around him and recovering some of that lost velocity — and perhaps some of his lost promise as well. A skeptic will point out that Hughes' troubles actually date back to mid-2010; since that year's All-Star break, his ERA is 5.34 over 150 innings, with 1.4 homers, 3.4 walks and 6.1 strikeouts per nine. Still, there's plenty of reason to think he's learned from his mistakes, and that better conditioning and self-understanding will help him unlock some of his vast potential. I want to believe.

We don't have the answers to any of these questions right now. We'll just have to wait for the season to unfold. Rest assured that I'll be tracking these as it does. Happy Opening Day, everyone!

Oh, and if you're in the New York City area, I urge you to come out and hear Steve and me read from Extra Innings at the monthly Varsity Letters series, which takes place tonight (Thursday, April 4) at Le Poisson Rouge in Manhattan. Further details are here.