In at the Corners

Share All sharing options for: In at the Corners

While Jesus Montero remained in Yankee pinstripes, the Bombers didn't just have their potential designated hitter; they also had an insurance policy. If the team's supposed power hitters, for whatever reason, had an off year, Montero could, in an ideal world, step into that void and help recoup some of those power losses.

As it was, the Yankees' need for pitching was greater than their need for a power hitter, so off Montero went to Seattle for potential excellence in Michael Pineda and Jose Campos. Teams will always need to address their most glaring needs first, and for this reason, the trade itself is defensible if not laudable. Pineda is the only name involved who has had any major-league success for longer than a month; all three players could either bust or turn into All-Stars. 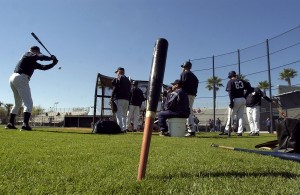 The problem, however, is that by solving one problem the Yankees have created another: the Yankees didn't just need pitching help; they needed to up their offense as well—at least, more than the signing of Raul Ibañez portends. By and large, the Yankees remain an older team, and as athletes age, they decline (Mariano Rivera excepted). On the Yankees this might be most notable with Alex Rodriguez. His position in the batting order, the size of his contract and his tendency to court headlines makes what's been a rather steady decline—related in large part to various hip and knee injuries (the vast majority of these occurring after 2007)—since his career year in 2007 seem even greater.

Rodriguez hasn't hit more than 35 home runs since 2008 (he managed just 16 last season), has declined in slugging percentage each season since then (even if we exclude last year, Rodriguez's .506 slugging, while decent, still pales in comparison with his career .567 average), and his career batting average just over .300 has turned into a .277 average over the last three seasons. Say Rodriguez gives the Yankees a .277 average with 25-30 home runs in 2012—productive, yes, but is that the type of play that's worth a 10-year contract?

Rodriguez has made it clear that he hopes to continue hitting in the cleanup spot; when this is coupled with with Jorge Posada lineup fiasco from last season, one is led to think that the Yankees will be loathe to alter Rodriguez's position in their batting order too severely unless circumstances become that dire. That doesn't seem too likely to happen in 2012—there's sill a significant difference between being a .280 hitter and the season Posada had that caused the much-ado-about-lineup brouhaha. Still, it's been so long since Rodriguez has had a full, healthy season that it's easy to remain skeptical about a) whether Rodriguez can stay healthy, and b) whether he can manage to put together a stat line closer to his career norms.

While the decline of a 36-year-old third baseman is inherently predictable, on the other hand, that's not necessarily the case for a 32-year-old first baseman, who should still be in his prime. Teixeira's 39 home runs last season are impressive—home runs, after all, are the best possible outcome—but the lowered batting average and on-base percentages suggest that when Teixeira isn't hitting a home run, he isn't getting on base with the same frequency the Yankees might have expected when they signed him.

In fact, Teixeira's batting average last season was a career low at .248; his .341 OBP was the lowest it's been since his rookie year. Sabermetric gurus will tell you that BA and OBP are far from the be-all of statistics, but career lows in anything other than strikeouts for a 32-year-old hitter who hasn't spent more than a day on the disabled list since 2007 has to be concerning. Although no one wants to use injuries as an excuse, the likelihood that Rodriguez's missed time has adversely affected him is too significant to ignore, but Teixeira doesn't have that excuse. Home runs are great, but the drop off in his other numbers should not be swept under the rug—especially if he and Rodriguez continue to hit back-to-back in the lineup.

So, if Rodriguez and Teixeira maintain their current pace, the Yankees would need Robinson Cano, Nick Swisher and Curtis Granderson to maintain enough offense to compete in the AL East; given Granderson's career year last season and Cano's performance the last two seasons, this may be a lot to ask. If those three can't perform, if Rodriguez and Teixeira can't put together a better season than they did last year, it's not a stretch to think the Yankees could have trouble in their division—after all, it was the Red Sox, and not the Yankees, who scored the most runs in baseball last season. The Yankees are favored on paper to win the AL East this season because of their pitching, but there's no guarantee Pineda or Ivan Nova avoid sophomore slumps or that Freddy Garcia can replicate last season's success.

It's quite possible that no one on the team hits 40 home runs this season, but it's also possible that no one needs to—after all, the 1998 Yankees, the bell weather against which all future Yankees' squads will be measured, didn't have any player hit more than 28. Still, given that Cano, Swisher and Granderson will all be free agents either after the end of this season or next, the Yankees' putting all of their eggs in that basket seems a bit like investing all of your stock with Bear Sterns in 2006—you're set only as long as your luck holds, and no luck holds forever.