Field of Dreams, League of Nightmares: Dirk Hayhurst's "Out of My League"

Share All sharing options for: Field of Dreams, League of Nightmares: Dirk Hayhurst's "Out of My League" 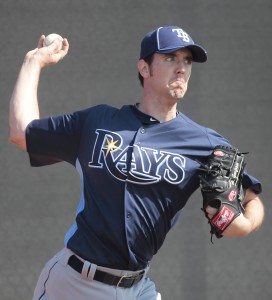 All of us have dreams. Everything in the American psyche is built on the idea of having dreams—boundless optimism, the idea that the world will be left a better place for one's children, the unstoppable march of progress. The phrase "The American Dream" is known to all of us, whether we can trace our lineage to the Mayflower or are a just-off-the-boat immigrant. We like to dream, and we like to dream big. There's a reason the line "If you build it, they will come" is so resonant to us: we need only dream it to have a chance to achieve it. The thing we never consider is what happens once we've done it—once we've achieved the Thing we've worked all our lives to do, the place we've exerted all our efforts to get to—turns out that it's not so much a dream, but a nightmare?

In pitcher Dirk Hayhurst's case, the nightmare is made even worse since it takes place on one of the biggest stages American society has to offer—the professional sports stadium. It's a dream shared by many children, not just in America but across the world: getting oneself out of poverty or an otherwise unwelcoming home life by proving oneself on the athletic field. For Hayhurst, this field happens to be a baseball diamond.

Baseball, we all know, is a cruel sport: in any other game, being successful three times out of ten is a sure way not to make the roster; for a hitter, it's a path to the Hall of Fame. Baseball has the longest season of any of the major sports, so while it's not a contact sport like football or hockey, injuries are still rather a question of "when" as opposed to "if." Players can toil for years in the minors, as Hayhurst did, only to get the chance to prove themselves in the majors, have one bad outing, and get sent right back down.

From the outside, it's easy to ignore the humanity. It's easy for fans to celebrate when a player they hate is traded or designated for assignment, easy to make fun of the players who have declined for no discernible reason, easy to decry the major leaguers who make more money in a single game than some of us do in an entire year. It's easy to forget that the ballplayers are people, too—in one moment in Out of My League, Hayhurst bucks up the courage to ask his long time idol, Trevor Hoffman, why he keeps playing the game. Hoffman's answer, that he is trying to provide for his kids and his family, is a reminder that whatever the on-field stakes, there are people off the field who still depend on the players' success.

So maybe it's hard to elicit sympathy for major leaguers—who wouldn't want a $400,000 paycheck just for showing up—but, it's a world of difference in the minors. Minimum wage paychecks (if that), long bus rides, sub-optimal living, fast food diets...as Hayhurst remarked in his first book, the much-lauded Bullpen Gospels, the only reason to keep playing in the low levels of the minors was because going home was worse.

In Out of My League, Hayhurst finally reaches the Show after six seasons (the subtitle of the memoir is "A Rookie's Survival in the Bigs", so this isn't a spoiler), but the magic of the dream fades quickly as he struggles to throw strikes. While a scene early in the book between him and his father on a backyard mound will tug at your heartstrings, it's the moment when the Padres' pitching coach tells Hayhurst what he really thinks of his abilities after yet another poor outing that is most heartbreaking. We're often told to be careful what we wish for, and being a major leaguer, for all but the very best, is not necessarily any different.

As with The Bullpen Gospels, Hayhurst doesn't shy away from his home life, and it's here some of the book's most emotional (or otherwise memorable) moments take place: from the previously described mound scene, to the moment he calls his parents to tell them he's reached the majors, to his mother calling him the night he gave up a mammoth home run to Manny Ramirez to tell him that a tree had fallen on his car. There are more, of course, but they are better saved for the reader to experience on his or her own.

Most major leaguers aren't Derek Jeter or Adrian Gonzalez; for many the cup of coffee remains just that—soothing and warm at first, with sugar and cream to sweeten the deal, before it fades into a cold, bitter brew that leaves you wondering why you are so addicted to it in the first place. Out of My League is a staunch reminder that not every dream-come-true necessarily comes true in the way we hope it will, and that it is ultimately up to us to determine how well we weather the storm.

Hayhurst has pitched for the Padres, Blue Jays, and in the Rays' system. He will pitch 2012 in Italy. Full disclosure: I donated to Hayhurst's relief efforts in the wake of the Japanese tsunami in March 2011.