Share All sharing options for: Yankees Non-Roster Invitees, Part I 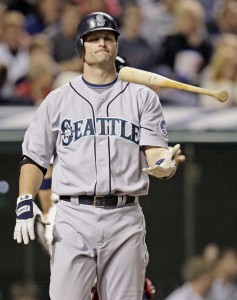 When healthy, Russell Branyan has real power, but he also finds himself doing this a lot. (AP)

Non-roster invitees to spring training start out guilty until proven innocent, especially the veterans and minor league journeymen. The assumption is that if their performance record was good enough to command them a guaranteed contract, they wouldn’t be in the position of trying to scrape by. Yet, as I remarked to a friend earlier this evening, not every witch walking through the forest selling apples is selling poisoned apples. Perhaps it's only one witch in 100 that isn't, but when you react to all witches with suspicion, you run the risk of punishing the innocent. Sometimes, you have to have a little trust. As such, let’s try to have a little patience and generosity as we run down this year’s list of Yankees NRIs.

There are 29 invitees this year. I’ll grab ten in this installment, then come back for the rest.

Russell Branyan was added to the Yanks’ NRI pool yesterday. In confess that as a fan of powerful platoon players, I have long been a fan. Branyan has not defensive position, struggles to make contact, and as a career .206/.287/.441 hitter with 242 strikeouts in 558 career at-bats against same-side pitchers, he should never see a fellow southpaw unless you’re really desperate for a home run—his 35 homers in those 558 at-bats isn’t a bad rate at all. In his career, the 36-year-old has hit .239/.338/.495 against right-handers with a home run every 15 at-bats, which is to say 40 homers every 600 at-bats. In short, he has real power but no hit tool. And at this stage, he might not have even the power, as a bad back has troubled him for years. After averaging .245/.337/.515 from 2008-2010 (spending extensive time on the disabled list in all three seasons), his bat just died last year, and he batted just .197/.295/.370 with the Diamondbacks and Padres. He could be a useful platoon DH for the Yankees if healthy, and they take no risk by finding out if anything is left, but it’s entirely possible that Branyan has already expended all he has to give.

DeWayne Wise is a homo sapien who plays a decent outfield, and back in 2009 he made a terrific catch that saved Mark Buehrle’s perfect game. That’s about all you can say about him. He’s 34 years old and has been in and out of the majors since 2000, devotedly not hitting, with rates of .219/.256/.373. The problem is that he has zero conception of the strike zone, with just 33 walks in 879 career plate appearances. Every once in while he runs into a fastball and hits it out, but that’s about all you’ll get. He’s played nearly 500 games at Triple-A and has hit .265/.315/.456, which strongly suggests that his major league performance is more or less justified. His job the last few seasons has been to float to the surface when some team has suffered a major injury or disappointment in the outfield, start a few games, show he can’t hit, and spend the balance of his time acting as a defensive replacement —in 445 career games he’s started 20, relieved in 339.

I touched on first baseman Jorge Vazquez, who came over from the Mexican Leagues at 28 (he will turn 30 in March) back in January. Sometimes you hear him suggested as a designated hitter candidate, and perhaps he could platoon against left-handed pitching if Andruw Jones wasn’t already ahead of him and he could substitute somewhere more useful (he has played some third base, badly). As I observed then, last year, Vazquez struck out in 35 percent of his at-bats against right-handed pitching, a rate that is very close to that of Baltimore K king Mark Reynolds. If given time in the majors, he will hit some home runs, but a first baseman-DH who hits like Miguel Olivo is of very limited utility.

Gary Sanchez is now the Yankees’ top catching prospect with the exile of Jesus Montero. He’s a very similar player in that he can almost certainly hit, but his glove lags well behind his bat. Last season he allowed 26 passed balls in 60 games, which means that either Phil Niekro was attempting a comeback in the Sally League or Sanchez wasn’t really trying. The Yankees chose the latter interpretation, sending him back to Tampa for some head-straightening. Sanchez is just 19 and is in the major league camp to get experience as well as the reality that a lot of catchers are needed to warm up a lot of pitchers in the early going.

Utility infielder Jayson Nix, brother of outfielder Laynce (mom and dad had a thing for the letter "Y," it seems), is an excellent fielder at second base and has some power, with 30 home runs in 778 career at-bats. Making contact enough to hit for average has always been a problem, which is why a career .282/.345/.450 hitter at Triple-A with good instincts in the field never sticks. He hit .169 in the majors for the Blue Jays last year. He’s better than that—consider that in roughly a full season of playing time shared among three teams in 2009 and 2010 he hit .224/.293/.401 with 26 home runs. Nix can play third base and will take on shortstop or an outfield corner in an emergency, but the keystone is his real specialty. Robinson Cano is a durable star, so there might not be an opening here.

J.R. Murphy is the Yankees #2 catching prospect (I haven’t forgotten about Austin Romine; he’s either catching prospect 1.5 or 2.5, depending on which faith you were raised in), or maybe he’s a third baseman —the Yankees haven’t quite figured it out yet. Murphy was having a breakout season at Charleston when he broke his foot in July. Like Sanchez, he’s here to get experience and warm up the pitchers pre-cut-down.

You remember Gustavo Molina, who made the 2011 opening day roster while Francisco Cervelli was hurt. A career .219/.264/.339 hitter at Triple-A, he couldn’t hit water if he fell out of a canoe. Again, early in spring training you need people who know how to catch without hurting themselves.

Let’s get the rest of the catchers out of the way to round out our first ten. Jose Gil, 25, has been in the Yankees system since you were still in elementary school, or 2005. The native Venezuelan got his first Triple-A cup of coffee in 2011. He throws well, which explains how he got to Double-A despite hitting just .235 in A-ball (Hi-A, A, and Low-A combined). He hit .243/.321/.412 in 113 games with the Trenton Thunder, which, well… isn’t bad for Trenton (I told you, I’m trying to look on the bright side here). It still doesn’t leave you a lot to dream on. Finally, Kyle Higashioka was a seventh-round pick by the Yankees in 2008. He got some play as a prospect at the time—when Higashioka was an amateur, Baseball America praised his receiving skills and noted "interesting power potential"—but he’s hit just 17 home runs in 877 minor league at-bats and has averaged just .236/.306/.347 overall. I’ll say it once last time—they’ve got an awful lot of coffee in Brazil, and you need an awful lot of catchers in spring training, even if their future prospects are limited.

We’ll be back with another ten directly.