Hall Signs, Ibanez is Rumored, and Matsui is Considered

Share All sharing options for: Hall Signs, Ibanez is Rumored, and Matsui is Considered

Ibanez /Matsui
Rumors of Raul Ibanez donning the pinstripes were hot and heavy yesterday. I talked about him about a week ago. The upshot: defense-free player who is 40, hit .228/.292/.352 away from Philadelphia’s cozy ballpark over the last two years. Maybe he can take advantage of the Yankee Stadium right field express lane the way he did his Philadelphia Freedom, but that still leaves 81 games on the road for the Yankees to deal with.

I have yet to comment on the possibility of a Hideki Matsui sequel, a rumor that has also gained some currency. Matsui shares the no-defense characterization with Ibanez, but is younger and has really only had one bad year in his career. Unfortunately, it was last year, and he turns 38 in June. Now, he was playing in the wrong park last year, not just for left-handed power hitters but for humans. More troublingly, he hit only .267/.318/.411 on the road.

Matsui’s line drive rate was solid, and it does look like he hit in some heavy bad luck last year. Batting average on balls in play is not always the magic answer to everything—sometimes a player has a low BABIP because he was more bad than unlucky—but at .274 (versus a career average of .300), it does seem like between the park and some bad luck he was stymied last year and might have more life left in him than does the older Ibanez. Note that his 2010 with the Angels was nearly identical to his 2009 with the Yankees once you adjust for differences in parks. 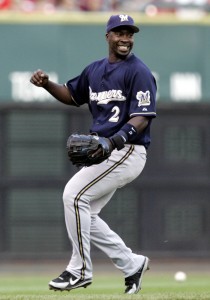 As I wrote about Matsui, Bill Hall announced via Twitter that he has signed with the Yankees, and the Yankees confirmed that Hall received a minor league contract and an NRI to spring training. In the same post linked above, I wrote about Hall when the team’s interest was rumored last week. Over the last four seasons, he has hit 245/.304/.422 against lefties and .209/.274/.362 against righties. Four years is a large enough sample (and then some) to make you wonder if this signing is going to have any value at all. Hall is 32 and couldn’t stick in the majors last year, not surprising given that neither split is of major-league quality—remember, the average major-league right-handed hitter averaged .264/.334/.418 against southpaws last year.

Since Jesus Montero was traded, Yankees-watchers have focused on designated hitter, and who might take over the position and/or platoon with Andruw Jones. The assumption is that the Yankees need to add a slugging left-handed DH of some kind. That is incorrect. They need to add, somehow, a utility infielder with some pop. What I just wrote is nearly an oxymoron, and at this point in the winter it’s not likely the Yankees are going to get someone like that, but it’s what they need.

If the Yankees are going to use the DH position to give regular rest to the aging Derek Jeter and Alex Rodriguez, quite a few plate appearances around the infield are going to be left up for grabs. If you give them to Eduardo Nunez or a stock utility type, the Yankees will lose quite a bit of offense each game compared to what they would have gotten had, say, A-Rod played third and a Real Hitter been used as the DH. On those days, Real Hitter, whoever he is, will sit and Typical Utility Guy will play third. At 100 plate appearances a year, this is survivable. At 250, it’s a problem. The alternative is that the Yankees just don’t rest these players as much as we think they will have to. That is certainly a gamble they could take, but they could pay for it in a big way.

Things We Read Today
"What would you do? Would you rather put the youngsters in at the start and, as a result of the experience they will acquire, have them coming along great in the final third of the season, or play the older fellows until maybe they gold up and the have to toss the youngsters in? I’d rather go with the youngsters at the start and then, if it becomes necessary, put the older men in, knowing quite well what they can do."—Leo Durocher, Brooklyn Dodgers manager, on playing young players over veterans, The New York Times, April 6, 1946

Totally Random Note
The Yankee Stadium outfield did not have a warning track until 1950. For one thing, this explains the various career-shortening ballplayer-meets-wall fractures endured by Earle Combs.