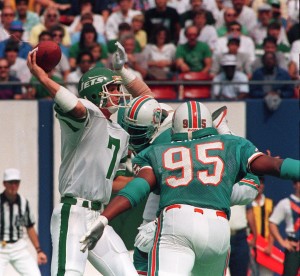 Ken O'Brien under pressure: when wasn't he? (AP)

The thing I love about the Super Bowl (since my team will probably never play in one) is that once it's over, it feels as though there's nothing standing in the way between where you are in time and the start of baseball season. Never mind that even after pitchers and catchers report it's another two weeks before exhibition games start and another six before the season proper; winter is long enough as it is and we'll settle for anything that bears even a passing resemblance to the real thing.

Look, as a Jets fan, January and February are traditionally rough months. They have, in the entirety of their almost 50-year history been to the AFC Championship Game (not even the Super Bowl) just four times, two of those in the last three years. Just like their fellow Mets and Nets compatriots, Gang Green's got a history of bad management, colossal draft blunders, of side-show circuses and injury woes. Whether there's an actual curse involved in being on a team with a monosyllabic team name ending in -ets, I couldn't tell you, but the similarities in misfortune are either hysterical or creepy, and I'm not quite sure which.

When the Super Bowl involves the Giants and Patriots for the second time in four years—two well-managed, well-coached, controversial-only-on-the-field teams—watching it willingly involves something slightly sado-masochistic on some level. Perhaps this is how Orioles or Astros or Pirates or Cubs fans feel when they're watching the Yankees and the Phillies playing each other in the World Series. How much different would it feel if you believed your team was good enough to belong there, among the upper echelon. That's the thing about being an -ets fan, even when the team is having a good year—you never quite believe, and even if you take that leap of faith, they'll find some way to tear your heart out.

Baseball fans are no strangers to broken hearts, but the extent of the damage often depends on expectations. An 89-win season is a dismal failure for the Yankees, but for the Pirates it would be their best season in almost twenty years. The 162-game season means there's a lot of time for expectations to rise or fall or otherwise adjust; last year's Cardinals were supposed to be good until Adam Wainwright hurt his elbow and Albert Pujols broke his wrist, then they weren't, and then they won the World Series. If we consider it another way: the Texas Rangers, who have never won a World Series, have now been first runner-up two years in a row; getting to the World Series alone was accomplishment enough the first time, but not the second.

The Angels, Rangers and Tigers will all be under a microscope with their high-end free agent acquisitions of the offseason, but the Yankees' expectations won't be any less than they have been since the mid-1990s. They'll be expected to show that they were right to trade Jesus Montero for Michael Pineda, right to sign Hiroki Kuroda, right to pick up Nick Swisher's option and right to re-sign CC Sabathia. Yankees fans expect their team to perform well, and when the team has a similar record to the Red Sox or Phillies or Rangers, they believe the team belongs there. On the other hand, when the Pirates are in first place in July, it's cause for internet snark, because no one actually expects the Pirates to remain in first place.

The two weeks after the Super Bowl are unbearably long for those of us who hate to go without either baseball or football. February (in a normal winter, anyway) is raw, cold, depressing if you're single and feels like winter has overstayed its welcome. Pitchers and catchers reporting isn't something we can watch in the same way we can watch a game; in many cases a number of pitchers and players will have already made their way down to Florida before the official reporting date, but even the notion of baseball players gathering together somewhere to ply their trade is enough to make the sub-zero temperatures seem just that little bit warmer. On that first day of workouts, where no team has yet lost even an exhibition game, even a Jets fan can be made to believe.