Derek Jeter is a Unicorn

Share All sharing options for: Derek Jeter is a Unicorn

The Super Bowl is America's most-hyped sports event of the year, so it's perhaps no surprise that there are plenty of oddities that go with it—such as half time act Madonna getting her very own press conference. Among the questions asked was one about the rumored painting of Rodriguez as a centaur—which Madonna answered by saying that if there was such a painting, she never saw it. 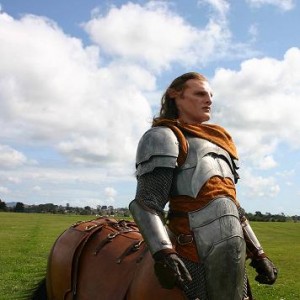 Say, for a minute, though, we accept that Rodriguez identifies with the mythological features of a centaur (and one can argue that the centaur's half-man, half-beast composition is symbolic of Rodriguez' on-field and off-the-field personalities ). We are then free to wonder what other mythological identifications might be appropriate for the rest of the Yankees—in case, you know, they decide that they too want symbolic portraits of themselves...

Derek Jeter as Unicorn
Unicorns are symbols of innocence (they can only be tamed by virgins), and the closest Derek Jeter has ever come to outright scandal is whether or not he should bat leadoff or second. Unicorns are also supposed to be exceedingly rare; shortstops who can play in three different decades with only two appearances on the 15-day DL in that time-frame while amassing over 3,000 career hits all with the same team certainly are not common. So maybe Jeter can't heal the sick—not yet, anyway—but no matter. He is class, grace, and (given what we know about his marital status), apparently also impossible to catch.

A.J. Burnett as Dragon
First, the difference between Good A.J. performances and Bad A.J. performances is about as polar as the difference between the dragon in eastern cultures and western ones. Second, if we postulate that Bad A.J. is the western representation of the dragon—a dangerous thing that can cause all manner of destruction—it explains how a Bad A.J. start is often perceived by the fan base, either by pitching horrendously, giving his team no chance to win, or by igniting the media storm that follows. The love or hate people have for dragons may not entirely equate with the way fans love to hate Burnett, but the moral is still the same: you're supposed to stay far, far away from fire hazards. 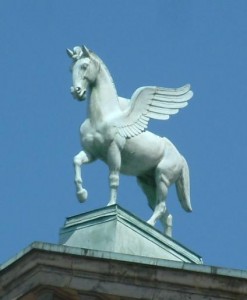 NOT the roof of A-Rod's house. (Wikipedia Commons)

Mariano Rivera as Pegasus
Pegasus ascended to Zeus so he could bring thunder and lightning from Mt. Olympus down to us mortals; Rivera himself said that his cutter is a Gift from Above. Clearly, any reliever who has survived 16 seasons on one pitch, earning five World Series rings and amassing 600 saves in the process, has to be in constant contact with a Higher Power. Pegasus is both a symbol of wisdom and poetry; Rivera is the Yankees' equivalent of Merlin, Gandalf, and Dumbledore all rolled into one, and if his pitching was translated into poetry, he'd probably be a Nobel laureate.

Brian Cashman as Kraken
Okay, so maybe Cashman isn't a giant octopus that lives under the sea (have you ever had octopus? It's yummy), but he does have a habit of coming out of nowhere to make huge splashes, causing giant earthquakes in the baseball universe. After all, think about what happened when the Yankees, not the Red Sox or the Angels, signed Mark Teixeira (one went and got Adrian Gonzalez, the other Albert Pujols), and the expectations that the Yankees will win the AL East after Cashman's most recent blockbuster. Oh, and one more thing—Cashman does have a Pirate-eating habit.

David Robertson as Griffin
Griffins are exceptionally majestic beasts known for guarding treasure. There is no greater treasure the Yankees have right now than the sight of Rivera on the mound in the ninth inning, and as the Yankees' set-up man, it's Robertson's duty to make sure Rivera's ninth is unimpeded by such intrusions as runs scored by the other team. After all of the starters and other relievers have made their appearances, Robertson is the Yankees' last line of defense before their closer must enter the fray. Good thing, then, that Robertson's strikeout rate is pretty darn majestic as well.

Nick Swisher as Phoenix
Unlike a bad Burnett start, which can ruin everything around it, Nick Swisher has an uncanny ability to rise from the ashes after a bad month or a bad year. There might be other, better examples of baseball players resurrecting themselves, but Swisher's colorful personality works nicely with the phoenix's colorful red and gold plumage. I'm not sure if Swisher and Rivera have quite the same relationship as Fawkes and Dumbledore (there are no phoenixes in Lord of the Rings and I'm only on page 146 of The Once and Future King—NO SPOILERS!), but at the very least the two are teammates, and we all know that Swisher has saved the bullpen before...