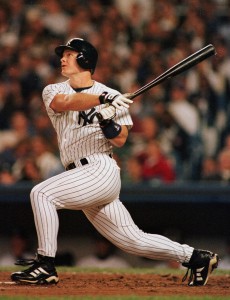 I was out to dinner last night with two old pals who used to be in the baseball business and Shane Spencer came up. I hadn’t thought about Spencer in any great detail since 2004 or so, so it was pleasant to recall 1998, a year in which just about everything went right for the Yankees, among the 26-year-old rookie Spencer going nuts and hitting 10 home runs in just 73 plate-appearances. He hit .373/.411/.910 in that little trial, setting a standard he could never hope to match. He had a good little career, particularly given that he was a 5’11", 28th-round draft pick in the Yankees organization—historically, such players are more likely to be struck by a falling chunk of frozen airplane sewage than they are to make the majors and have a 500-game stay.

The latter part of his career was mired by a couple of alcohol-related incidents which led him to be released by the Mets (if only his crime had been something like embezzlement—he’d still be there), but he was useful for several years. Spencer’s main talent was hitting left-handed pitching; he was a career .296/.345/.497 hitter against southpaws, versus .245/.316/.392 against same-side pitchers, numbers not good enough to keep him in the lineup. He had a reputation as a poor defender, but he was hardly Alfonso Soriano out there, getting to most of what he should have.

I love players like Spencer who are valuable despite their limitations. Andruw Jones, defrocked star, played that kind of role for the Yankees last year, as he did for the Rangers and White Sox in the two years before that. Jones will never win an 11th Gold Glove to go with the 10 he picked up beginning in that same year of 1998, and you don’t want to see him out there against right-handers too often, but over the last three seasons he’s hit .208/.308/.467 against same-side pitching (hence my "too often" qualifier—with 29 home runs in 418 at-bats, he can still send the ball over the wall if he ties into one, something worth trying in the right situations) and .254/.374/.492 against southpaws, with 20 home runs in 331 at-bats. Over that same period, American League hitters batted only .262/.331/.409 against portsiders.

Platoon players have gone through phases in baseball from lack of acceptance (one early exec, in the days before statistical splits were commonly available, called platooning "a psychological fad") to near-extinction due to relief pitchers overgrowing rosters like kudzu. There is not enough room to have multiple players at more than one position anymore. The Yankees might need to platoon at both left field (Brett Gardner is now a career .243/.349/.318 hitter against lefties) and designated hitter (because that position is still wide open). With 12 and sometimes 13 pitchers on the roster it will be difficult to make both work unless a utility player is potent enough to double up. In the glory days of platooning, most managers carried only 10 pitchers.

I miss those days, which were as recent as 20 years ago. Baseball was more fun when managers had substitutes to play with. With fewer pitchers, Whitey Herzog had room on his Cardinals team for a 25th man like Tom Lawless, who almost never played unless there was an emergency. He would pinch-run or substitute if Herzog had to pinch-hit for an infielder, but otherwise he was just there to watch. In four seasons with the Cardinals he played in 166 games and got only 216 plate appearances. He couldn’t hit, batting .187 in those PAs, but he had skills that the team could use as long as they kept him away from the plate. One year he didn’t get into his first game until mid-May. I don’t recall that he was hurt—Herzog just hadn’t needed him yet.

Teams used to carry three catchers, five outfielders, whatever they thought would help. They kept their 11th, 12th, and 13th pitchers in the minor leagues and called them up when they needed them, which is still sensible—perhaps in this day of fewer off days, teams do require an 11th pitcher, but surely the second lefty and sixth right-hander could remain in Scranton until called.

Pinch-hitters have delivered some of the coolest small-sample seasons that we have had in baseball, seasons like Shane Spencer’s 1998. In 1968, Gates Brown was instrumental in pushing the Tigers to the World Series, batting .370/.442/.685 in 104 PAs, .450 of it coming as a pinch-hitter. Dusty Rhodes hit .341/.410/.695 as a outfield reserve and pinch-hitter for the 1954 Giants, then helped his team upset the Indians in the World Series by going 4-for-6 with two home runs. Smoky Burgess was a catcher who was basically too fat to catch, but he was a good enough hitter that he hung around forever anyway. He was a career .278/.376/.431 hitter in 551 PAs as a pinch-hitter, which doesn’t sound like much, but given the disproportionate role luck plays for one-at-a-time hitters, those rates are actually amazingly good. There were many seasons in which he hit .300 or .400 as a pinch-hitter.

Those guys are extinct now, but their skills still exist in some ballplayer of the present generation, probably more than one. The first team that casts off its 12th reliever in favor of a 25th man with a bat is going to reap a large advantage, particularly if that hitter is a powerful right-hander, because that team’s manager is going to be able to deter the opposition’s lame lefty specialists right out of the ballgame. That hitter would feast, too, because the platoon splits against those LOOGY types are often obscenely bad, and once that LOOGY is in the game, his manager cannot take him out until he’s faced at least one batter.

All it takes is one good season like this to start a trend in baseball, or in this case, reverse one. The only thing swelling bullpens is a mass delusion shared among all 30 managers at any given time that this is the right thing to do. The first one to break with the practice will so embarrass the others with the absurd vulnerability of their spot relievers that overnight they will all want to have extra bench players instead of extra relievers. That’s how platooning got started. That’s how spot relievers displaced platoon players. The pendulum can swing back the other way.

Alas, it probably won’t happen anytime soon. There are few innovators among managers these days. The Yankees have an opportunity to break with the pack in settling their DH situation, perhaps finding a left-handed Shane Spencer type to go with their right-handed version in Jones. It probably won’t happen, but I’ll keep waiting for the day. Think of that when the Yankees' last pitcher, who may well prove to be Phil Hughes, comes into a 14-1 game to pitch a couple of innings.