The Yankees, Phil Hughes, and the Bullpen: a Love Story

Share All sharing options for: The Yankees, Phil Hughes, and the Bullpen: a Love Story

A funny thing happend on Phil Hughes' road to stardom. 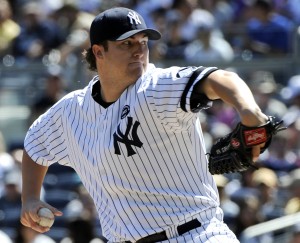 In his second-ever start, Hughes flirted with a no-hitter, and then he got hurt. Injuries returned again in 2008, limiting him to just 34 innings that season. In 2009, Hughes moved to the bullpen to make room for Chien Ming Wang in the rotation. Wang would injure his shoulder on Independence Day that year and ultimately not pitch another inning for the Yankees; Hughes woud excel as the team's eighth-inning setup man, helping the team, but at the price of his own development. In 2010, at the still-young age of 24, Hughes pitched well enough in the first half of the season to earn himself a bid to the All-Star game; whether because of fatigue or another reason, the second half of the season was not nearly as successful by most statistical measures (if it was successful at all). Those struggles continued in an exaggerated form in early 2011, landing Hughes on the 60-day DL yet again. He returned in July and was still below league average, despite how much he seemed to have improved from April.

Going into the 2012 season, the pitcher many once thought might be the centerpiece in a trade for Johan Santana has surpassed 100 major league innings in a season just once (in 2010), and has spent a total of 319 days—almost a fifth of the five years since his major league debut—on the disabled list. It might seem cruel to call a pitcher who will turn 26 in June a failed prospect (if there is such a thing), but since Hughes started so early one has to measure in terms of seasons, rather than age. There's no rule that says a player has to peak by his fourth season in the majors, but one would expect any player to have shown improvement, something Hughes—very likely do to the substantial time missed—has not done in quantities that would inspire confidence.

With the logjam currently provided by having seven starters for five rotation spots, it would thus seem logical that barring a stellar spring training, Hughes would not be the first choice for that last rotation spot. At the very least, Hughes offers the Yankees a certain flexibility they don't have with A.J. Burnett or Freddy Garcia: Hughes has has had success pitching out of the bullpen, and he is not far removed from that experience, either.

There's just one problem with that scenario: assuming Mariano Rivera, David Robertson, Rafael Soriano all pitch well and stay healthy, not to mention the possibility of a resurgent Joba Chamberlain at some point during the season, Hughes would end up quite far down on the bullpen depth chart, in roughly the same role Luis Ayala had last season. It would take a catastrophic injury or a mid-season retirement to boot Rivera from the closer's role; Robertson more than earned his eighth-inning spot (which he inherited after injuries to Chamberlain and Soriano) and Soriano is due $11 million in 2012. Even Corey Wade pitched well enough to have earned his place at the table. Assuming the starting pitchers throw the baseball vaguely in the direction of home plate on any sort of consistent basis, the current set up would allow Hughes the sixth inning as the highest-leverage situation available. Without getting into discussions about leverage and why the number of an inning is not necessarily a harbinger of how important that inning is to that particular game, the fact remains that in such an alignment Hughes would rarely be pitching anything other than mop-up innings.

Then again, there is a reason Joe Girardi's Yankees have been known for the stellar work of their bullpens. By their very nature, bullpens are the most volatile component of any baseball team, and their composition changes frequently, often in-season, utilizing both prospects and cheaply-had journeymen. Mariano Rivera is deified by fans not just because he was that good at his peak, but because his peak has lasted the better part of two decades. History and logic both suggest that there is no way all four at the top of the Yankees' current bullpen hierarchy make it through the season healthy and while pitching effectively.

Soriano, who has a lengthy injury history of his own (including elbow and shoulder problems) might be considered the greatest injury risk, but Robertson might very well be due to regress as well. Robertson's numbers overall for 2011 were outstanding; his numbers in high-leverage situations are such that one has to wonder just how much longer that success rate can be kept. No tightrope walker, no matter how good, can walk the high wire forever. Robertson's walk and strikeout rates in 2011 are well within his career norms; the sudden decrease in ERA might very well be attributed to the substantial decrease in both hits and home runs per nine. Given the steady peripherals, it would seem that luck (or a very good defense) was at much at play in 2011 as anything else, and no one is lucky forever (and especially not with an aging infield, which, while maybe not the Detroit Tigers, is certainly no Evers-Tinkers-Chance).

In an ideal world, with every reliever healthy and pitching to his potential, and assuming Hughes doesn't all of a sudden find "it", the Yankees might seek to recoup some value for Hughes on the trade market (he is, after all, still relatively cheap and it might be tempting for some teams to think that a change of scene might unearth his untapped talent), but major league baseball is not played in an ideal world. bullpens almost never make it through a season unscathed, so should the Yankees decide to place Hughes in the bullpen and not the rotation, it is more than likely he will get his chance. Again.