You Can Never Have Too Much Pitching, Except When You Do

Share All sharing options for: You Can Never Have Too Much Pitching, Except When You Do

I'm pleased to welcome the latest contributor to the Pinstriped Bible, Rebecca Glass. Rebecca has written about baseball for ESPN and You Can't Predict Baseball and will soon be joining me at Baseball Prospectus as well. In the short time I have known Rebecca, she has not only become a good friend, but I have been impressed by her erudition, sense of humor, and fanatical devotion to all things Montero. Alas, that last went unrewarded, and given that she not only wields words but swords, I would advise the Yankees not to disappoint her again. You can follow her at @rebeccapbp, but remember, be nice or *snikt!*—Steve 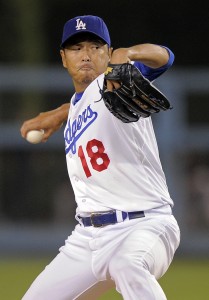 Hiroki Kuroda: A veteran starter, and a good one, he won't be going to the bullpen. (AP)

Teenage girls are supposed to decorate their rooms with posters of guys their fathers wouldn't be caught dead to have them date, but I took a slightly different approach. Instead of Johnny Depp and Brad Pitt (okay, so there were a few of those, too), I decorated my walls and closet doors with clippings from Sports Illustrated, New York Times, ESPN The Magazine and the hometown paper, The Record. If it had a member of the Yankees, Devils or Jets on it, it was good enough to go up, and thus my walls became so adorned.

One posting, in particular, I remember: a season-preview, with George Steinbrenner surrounded by members of the pitching rotation he assembled, and the headline: YOU CAN'T HAVE TOO MUCH PITCHING (Just ask George).

A couple of thoughts come to mind now, thinking about that particular cover:

1) The pitching hero of the postseason that year for the Yankees was not a starter, but instead Mariano Rivera, with his three shutout innings in Game 7 of the ALCS against the Red Sox;

2) When you have a full 40-man roster, unless you've got Felix Hernandez, Clayton Kershaw, Roy Halladay, Justin Verlander and Tim Lincecum as your rotation (and Dave Duncan as your pitching coach), you can certainly find yourself having too many pitchers.

Such is the situation the Yankees now have, both in theory (how do you cut a presumed seven-man rotation down to five?) and in fact (the 40-man roster is full, and Hiroki Kuroda doesn't yet have a spot on it). The most obvious solution is to drop an excess pitcher; Kevin Whelan, who did not impress in the majors last season and turned 28 a few weeks ago, would seem an obvious candidate.

Spare bullpen pitchers are not as hard to find as one might imagine, so cutting Whelan or similar is a low-risk proposition, but the problem of seven pitchers vying for five rotation spots (CC Sabathia, A.J. Burnett, Ivan Nova, Phil Hughes, Freddy Garcia, Michael Pineda, and Kuroda) is less easily solved. Barring catastrophic injury, one can assume Sabathia's spot in the rotation is safe, and, as long as last season's forearm injury has healed, the same goes for Nova. The Yankees didn't trade Jesus Montero to put Pineda, one of the most promising young starters in the game, in middle relief, and the veteran Kuroda has been a very effective career starter. That means Burnett, Hughes, and Garcia are vying for one spot.

This is not quite the Joba Chamberlain/Hughes rotation battles of seasons past. Those were clashes of youth; Hughes can't be called a prospect anymore, while Garcia and Burnett are veteran journeymen. If the Yankees chose to send one of the three to bullpen, Hughes would probably be the most likely candidate. He did, after all, pitch most of the 2009 season from the bullpen and was crucial to the team's World Series run, so he would not be an entirely unknown quantity in that role, as volatile as relief pitchers may be. Garcia and Burnett have never pitched out of the pen; between them they total 70 years of age and seven games in relief.

If the Yankees do flip Hughes to the bullpen, they would, assuming no trade has been consummated by the end of spring training, still be left with Burnett and Garcia vying for the fifth-starter role and the uncomfortable question of what to do with the one left on the outside. The Yankees' reluctance to drop a struggling Burnett from the rotation last season meant they ended up using a six-man rotation for much of the second half; given Bartolo Colon's second-half struggles, the Yankees lucked into a strategy that worked for a time. Over a full season, it becomes a different story—especially since it's hard to argue that Sabathia's or Pineda's workloads should be reduced so that neither Burnett nor Garcia bear the ignominy of not being good enough to make the starting rotation.

There is, of course, an elephant in the room, a big one, decked out in jewels and with the King of Siam enthroned on it. Said elephant is Burnett's massive contract. If Burnett and Garcia received similar-enough pay, the decision wouldn't be quite so hard—Garcia hasn't been brilliant, but unlike Burnett, hasn't been so bad as to have writers and fans calling for his removal from the rotation. If Garcia outperforms Burnett in Spring Training, which would not surprise too many, the Yankees are still left with the problem that it's a lot easier to unload a $4 million contract than an $33 million one (with limited no-trade protection to boot). It would be a heck of a lot easier to find another team willing to trade for Garcia than one willing to trade for Burnett.

Precedent does exist for trading underperforming players with bloated contracts, and the sheer fact that Burnett has managed to stay healthy over the past three seasons (an irony that should not be lost given his history) means that he has some value, although it's unlikely the Yankees would be able to get much in return, and not without eating a substantial portion of the contract. For a team trying to rein in spending like a Eurozone economy, simply swallowing the remainder does not sound like a policy they would pursue, although it's a moot point--the money is gone either way, so the choice isn't between spending the $33 million remaining on the contract or not, it's a choice between spending it and letting Burnett drag the Yankees away from the postseason or letting another team be the recipient of that gift.

It is almost an impossibility that the Yankees will be able to go through the entirety of the 2012 season with just five pitchers in their starting rotation. Pitchers get hit, get hurt, and, like all other humans, occasionally have personal emergencies that take them away from the team. If it turns out that last year's success has no bearing on Garcia's ability to pitch this year; if Nova's forearm injury at the end of last season is a harbinger of a worse elbow problem (or he simply regresses); if Sabathia hurts his shoulder—if any of these things happen, then what the Yankees do with a spare part becomes a moot point. Sure, Manny Banuelos and Dellin Betances might be waiting in the wings (along with the lower-ceilinged, but still promising Adam Warren and David Phelps), but being a prospect alone does not guarantee success—of the Chamberlain/Hughes/Ian Kennedy Big Three of just five years ago, one needed Tommy John surgery, another struggled as much as (if not more) than Burnett at one point in 2011, and the third, while successful, is no longer with the team. Depth is a wonderful thing to have, but it disappears the moment it needs to be used.

It's an odd situation in which the best-case scenario is that the Yankees would eat $33 million of a pitcher who was their number two starter in the World Series in 2009, has stayed healthy, and has pitched at least 185 innings in each of his seasons as a Yankee. This scenario assumes that the Yankees could get something of significance in return for their money; while an open roster spot is not without value, it cannot give you a quality start every five days. Best-case scenarios, though, rarely occur, and the Yankees, at some point will need a sixth (or seventh) starter. The Yankees are left with a situation in which there is no good answer where Burnett is concerned—even if he outperforms Garcia and Hughes in Spring Training, the sample size would still be too small when compared to the previous two seasons to inspire too much confidence—even as some would say, there is no such thing as too much pitching.