Share All sharing options for: Orioles Outlast Yankees in 11 Innings, 5-4

This was generally an ugly day of baseball. One could have expected as much considering these two teams played less than 12 hours ago. There was a dropped pop-up (scored a hit), six errors, four wild pitches, and generally poor defensive play with the constant rain throughout the afternoon. Even Brett Gardner misplayed a ball he would normally catch down the left-field line.

It was the closest the Yankees have had to a Quadruple-A lineup, what with Golson, Pena and Laird in place of Granderson, Cano and Tex (though they were pinch-hit for in the later innings).

A.J. Burnett pitched into the seventh but was removed with no outs after conceding a leadoff single. With three wild pitches, he cemented his status as the game's wildest pitcher. His 23 is almost double the second place pitcher's 12. On the bright side, he featured the best changeup he's had all year, getting a lot of swings and misses. He has to pitch better though - 6 IP, 4 ER still isn't very good, considering Baltimore has a below-average offense. And I don't want to hear about how the elements affected him. Both Phil Hughes and Tommy Hunter pitched better in the middle of last night than Burnett did today.

Unfortunately, the Yanks' B-lineup couldn't muster anything against the Orioles' seven relievers. But give credit where it's due: the Baltimore bullpen pitched six shutout innings. That's quality stuff.

What really hurt were three not-quite-long-balls off the bats of Andruw Jones, Jesus Montero and Curtis Granderson. The three off-the-wall shots missed being a home run by about 10 total feet. And that fifth run the Yanks could not scratch across came back to bite them.

Eduardo Nunez didn't put himself at the top of Joe Girardi's must-play-more list, going 0-4 with two errors, including a big one in the 11th (albeit on an admittedly tough hop) that eventually allowed the go-ahead run to score.

Russell Martin's inability to throw out base-runners finally cost the team in extra innings. Baltimore runners stole six bases on the day, but with each throw, it looked like Martin was getting closer to nailing one. It never happened though, and Matt Angle's stolen base after Nunez' error in the 11th led to the Orioles fifth run.

We'll see another contest between the two clubs tomorrow afternoon in Baltimore.

- A crazy game graph showing how many chances the Yanks had to win. 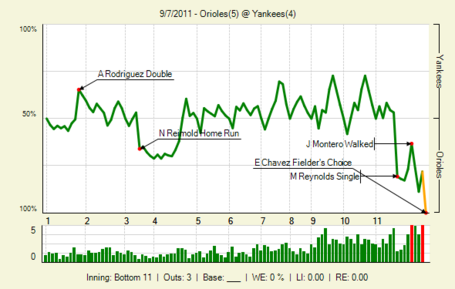 Play of the Game: Mark Reynolds' RBI single in the 11th that put Baltimore ahead (-34%).