I think the events of Wednesday night/early Thursday morning are going to take some time to sink in.  I still can't really figure out how to wrap my head around this: 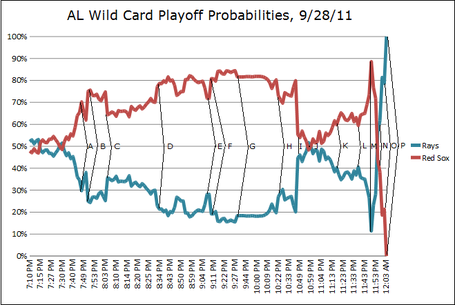 Sportswriters tend to be melodramatic, but I don't think they're overstating this as the greatest day of baseball ever.  Two walk-off victories, two extra inning games, one playoff team knocking a division rival out of the postseason altogether, and an Evan Longoria home run that, considering the circumstances, might be one of the ten greatest home runs of all time.

I'm kicking myself for falling asleep at 11:45.

A.J. Burnett will move to the bullpen for the division series. That’s why he faced a batter in relief tonight, just so he could do it one time before the postseason. "He’s a guy that can get a strikeout for us if we need it, and he’s a guy that can give us some distance if we need that," Girardi said. "He can do multiple things."

Can anybody here really see AJ Burnett pitching in relief in a tight spot?  I can't.  I'm not sure he's even their best candidate for mop-up duty, and he reminds me more and more of this guy.   Other than his ego and salary, I can't think of a great reason for him to be on the ALDS roster.