Tracking the Cash: Yankees at the Deadline, Part 1

Share All sharing options for: Tracking the Cash: Yankees at the Deadline, Part 1 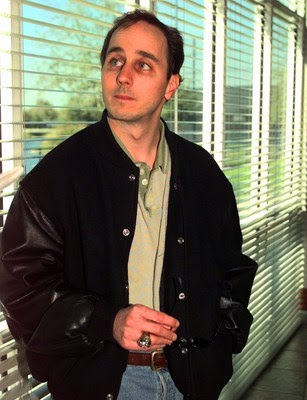 Brian Cashman was a lowly intern when he joined the Yankees organization in 1986, but he proved skillful at climbing the most slippery corporate ladder in professional sports.

Cashman was named general manager of the club in 1998, and on his watch the Yankees have captured six American League pennants and four World Series titles.

The 44-year-old New York native has been something of a lightning rod in his time as GM.

Supporters say he's a smart, hard-working executive that has earned the respect of colleagues around the game. Detractors believe Cashman was simply along for the ride during the dynasty run, is a poor talent evaluator, and was directly responsible for the team's title drought last decade.

Whatever your opinion, the man has staying power. With the trade deadline upon us, let's take a look at the Yankees' July trading activity under Cash.

The Yankees were a staggering 76-27 at the end of play on July 31 in 1998, so it's likely the young GM was warned like a kid standing next to grandma's china closet.

Cashman made the right decision, standing pat with a juggernaut team on his hands. The Yankees would go on to win 125 games and the first of three consecutive World Series titles.

One note of interest came during Cashman's first draft a month earlier. He selected, but was unable to sign, a talented San Diego high school kid by the name of Mark Prior. This likely led to daily cane lashings from George Steinbrenner for the next five years or so.

I'm sure Cash really misses answering to The Boss. 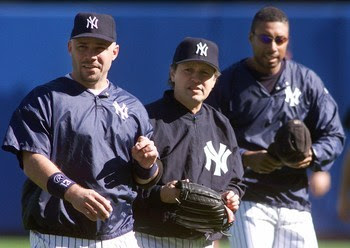 Before Jim Leyritz became the tragic drunk he's known as today, he was a Yankee hero, hitting the three-run homer off Mark Wohlers that swung the 1996 World Series.

The King, as the loquacious Leyritz was known, was brought back to the Bronx on July 31 for an unheralded minor leaguer.

This was the '99 season, in which Andy Pettitte struggled mightily in the initial months, leading George Steinbrenner to demand his trade. Cashman wisely convinced the Boss otherwise and, perhaps to placate him, reacquired Pettitte's one-time personal catcher.

Leyritz played sparingly in his Bronx return engagement, though he did hit a home run in the World Series against Atlanta that year. Though an inconsequential homer in the context of that Fall Classic wipeout, Steinbrenner rewarded Leyritz with an unnecessary contract for the 2000 season.

According to Buster Olney's excellent Last Night of the Yankee Dynasty, Leyritz referred to the blast as his "one-million-dollar home run." 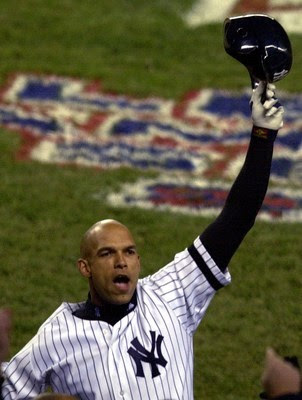 The Yankees were a flawed team in 2000, playing nothing like the dominating clubs of the past two seasons.

Substantial work needed to be done to buoy the team. Cashman would hit pay dirt. But not without a little luck.

The GM had been foiled in attempts to acquire Moises Alou and Juan Gonzalez when the veterans each rejected the idea of playing in New York.

Not to be denied, Cashman plowed ahead and eventually acquired Justice. The deal is widely considered to be Cash's greatest trade.

Justice hit .305 with 20 homers, 60 RBI, and 39 walks in 78 regular-season games. After lifting the Yankees into the playoffs, he had the defining hit of that postseason, blasting a late three-run homer off the Mariners' Arthur Rhodes in Game 6 of the ALCS to put the Yankees into the World Series.

Ledee never realized his promise, while Westbrook fizzled out after a promising start to his career in Cleveland. Day had a nondescript career, throwing his last pitch for the Nationals in 2006.

Justice was the primary score, but Cashman acquired two other known big league entities with mixed results. The trade for Glenallen Hill further aided the sagging offense, as the veteran slugger hit .333 with 16 homers and 29 RBI in just 132 at-bats.

A deal to add depth to the starting rotation was less successful, as Denny Neagle pitched to a 5.81 ERA in 15 starts. 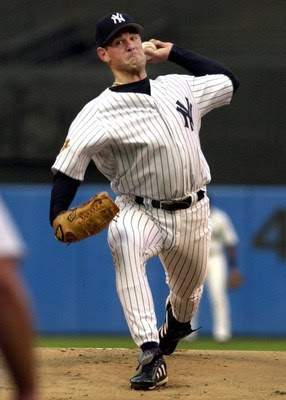 Cashman was busy again in 2001 but was ultimately unable to match the impact of the deadline deals a year earlier.

Wohlers was on the wrong side of Yankee history in the 1996 World Series. Five years later, the right-hander was brought in to fortify the bullpen under Joe Torre. Wohlers appeared in 31 games and battled command issues, finishing with a 4.54 ERA in pinstripes. He pitched one more season with the Indians before calling it quits.

Hitchcock was the NLCS MVP for the Padres in 1998, but he was a disappointment in his second go-around in the Bronx, going 4-4 with a 6.81 ERA.

His season in New York wasn't a complete loss, however. He was the winning pitcher out of the bullpen in Game Five of the World Series against the Diamondbacks, the Yankees' final win of that memorable season. 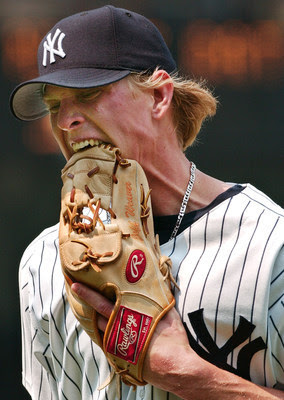 This was a deadline that Cashman would like to forget, even if all the damage wasn't his doing.

The trade for Mondesi was a disgrace, a direct product of George Steinbrenner's petulance. Mondesi was a player in decline in 2002, a hard-living, undisciplined, expensive slugger whom the Blue Jays believed they had no chance to rid themselves of.

J.P. Ricciardi was so sure that he was stuck with Mondesi that the Jays GM nearly drove off the Mass Pike when he learned the Yankees were interested. Sure enough, Mondesi was a slug in New York, the antithesis of the kind of player that helped build the recent dynasty.

Can't really blame Cash here. Sometimes The Boss was just going to be The Boss.

The Jeff Weaver debacle was on Cash, however.

The Yankees gave up left-handed prospect Ted Lilly to acquire the Tigers' Weaver, a talented right-hander who had yet to live up to his potential playing for a bad Detroit team. The deal blew up in Cashman's face.

Weaver didn't have the temperament to pitch in New York, looking eternally uncomfortable and unhappy on the mound.

His lasting legacy is the game-winning homer he allowed to Alex Gonzalez in Game 4 of the World Series against the Marlins in 2003. The walk-off blast turned the tide in the series, and as Lilly went on to flourish, it ensured the trade would be remembered as among Cash's worst.

July 22: Received Jesse Orosco from the San Diego Padres as part of a conditional deal.

July 29: Sent Dan Miceli to the Houston Astros as part of a conditional deal. 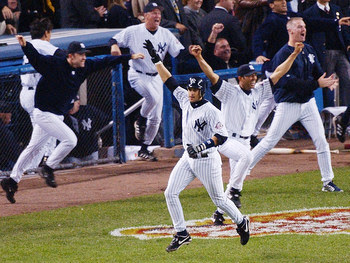 July 31: Received Gabe White from the Cincinnati Reds as part of a conditional deal.

Cashman officially cemented himself as one of baseball's premier deadline movers and shakers in 2003, orchestrating several deals for the eventual American League champion Yankees.

Of course, of all the above names, only one truly stands out: Aaron Bleepin' Boone.

Boone was acquired to replace a fading Robin Ventura, but things didn't get off to the best of starts. Boone batted just .254 in 189 regular-season at-bats and had been in a deep funk when he stepped into the box against Boston's Tim Wakefield in the 11th inning of Game 7 of the ALCS.

One flat knuckler changed all that, making Boone a folk hero in the process. Boone went on to blow out his knee playing basketball in the offseason, paving the way for a move that would change the face of the franchise: the acquisition of one Alex Emmanuel Rodriguez. 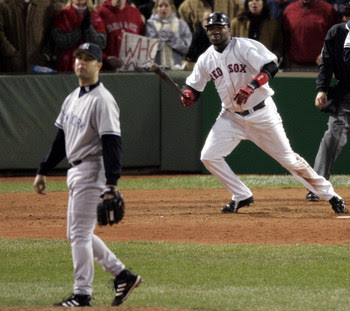 The season that will forever live in infamy for Yankees fans, 2004 was a relatively quiet year on the deadline front for Cashman.

Dealing away Jose Contreras was a white-flag maneuver; the Yanks had fought hard to acquire the rights to the Cuban defector only to see him struggle both on the mound and off in his two seasons in New York.

Esteban Loizia was thought to be a potential wild card, having won 21 games a season before with the White Sox. But Loaiza looked nothing like the All-Star he had been in Chicago and was banished to the bullpen after a succession of poor starts.

Had Cashman been able to flip Contreras for a more usable part, maybe it wouldn't have been a broken down Kevin Brown starting Game 7 of the ALCS against Boston that season.

Ah, the power of regret.

Check back tomorrow for Part 2 ...