Share All sharing options for: CC Dominant in Yankees 1-0 Win Over Rays

So CC Sabathia wasn't good enough to be an All-Star yesterday. Today he is (but he's not going anyway). He replaced his counterpart in this afternoon's pitching duel, James Shields, who was nearly as dominant as CC, on the AL roster. After he declined to participate, he was replaced by Texas' Alexi Ogando.

The only Yankee run came in the seventh, when the Rays made two errant throws, allowing Robinson Cano to score the game's lone run. The game was a cool two hours and 11 minutes thanks to complete-game gems from both hurlers.

Sabathia allowed five baserunners all day, and just one after the fourth inning. (It sure helped that Tampa made two outs on the basepaths.) He only needed 113 pitches (79 of which were strikes, 70%). He was throwing harder by the end than he did at the beginning. CC was about 92-94 MPH in the first few innings, and then finished the game with 97 MPH heaters. His last pitch of the contest, in fact, was his fastest of the day: 98 MPH. 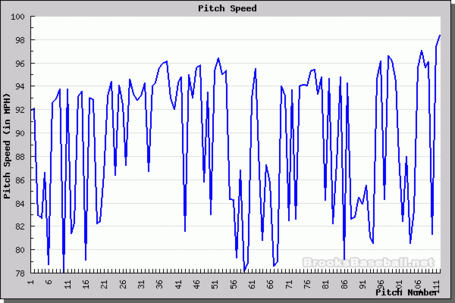 It's actually kind of sad - he's taken somewhat for granted by us fans. He's so consistent and reliable, and doesn't draw any attention to himself, that he really doesn't get as much credit as he deserves.

Play of the Game: The aforementioned throwing error by Shields, leading to the only run of the day (+16%).

Three days off now for the All-Star break, then a 14-game in 14-day stretch starting with four games in Toronto.