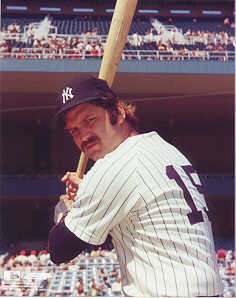 Thurman Munson was, without a doubt, my dad's favorite player. My father was born in 1958, and he grew up just after the Yankees dynasty of the '50s and '60s had ended. Some of the first articles he cut out of the newspaper and saved were about Mickey Mantle's retirement following the 1968 season, but Mantle was before his time. However, the Yankees' new hard-nosed catcher who debuted at the end of the '69 season caught his eye. The catcher, Thurman Munson, quickly became my dad's favorite player after the 1970 Rookie of the Year campaign. Looking back, it really was not a surprise that he liked Munson so much. More after the jump.

My dad, while not a gifted athlete, had a strong drive to succeed, just like Munson. The Yankees' captain was a player who reached the majors through a combination of talent and hard work. My dad appreciated Munson's attitude, and Munson's efforts to succeed mirrored my dad's efforts. Baseball played an important role in my dad's high marks in math throughout his academic career- he wanted to be able to figure out a player's batting average as a game progressed and not have to wait for the next day's newspaper to read it. My dad wanted to be involved in the high school's varsity baseball team too, though he realized that he was not a good enough athlete to play for the team. To stay involved, he became the team manager and wrote articles for the hometown newspaper about the team's success.

Munson's 1976 MVP season played out as my dad entered his senior year of high school, and he was very excited that he was finally going to be able to watch his team play in the post-season. In fact, he and a friend were at the decisive 1976 ALCS Game 5 against the Royals where Chris Chambliss hit a walk-off home run to send the Yankees to the World Series for the first time since 1964. They had to take a cab ride home to New Jersey and needed to wake up his friend's parents to pay for the fare, but the memories from the game were worth it. My dad watched with mixed emotions as Munson wreaked havoc on the juggernaut Reds' pitching staff with a .529 batting average during the Reds' World Series sweep.

As he moved on to college, Thurman Munson continued to be my dad's favorite player. He continued to work at his academia the same way Munson worked on the field, but my dad was also becoming more like the man Munson was off the field. Despite his gruff exterior, Munson was a loving man who hated being away from his young family during the baseball season. Likewise, it pained my dad to be separated from my mom (who he had begun dating his senior year of high school) as they attended different colleges in Pennsylvania. Just as Munson took to flying to see his family whenever possible, my dad visited my mom at her college as often as he could. Both men were dedicated to their loved ones, no matter what stood in their way.

Nothing prepared my dad for the tragedy that occurred on August 2, 1979. My dad was home and working for the summer, away from my mom again as his parents had moved from their hometown following his high school graduation. On this day, my dad was stunned by the news that his favorite player had been killed in an airplane crash at age 32, leaving behind a wife and three kids. He was devastated by this news, and although he continued to like the Yankees, it took him a few years before he could really adopt another favorite player (Don Mattingly). Yet as great as Mattingly was, he could never replace my dad's favorite athlete of all-time, Thurman Munson. The chilling epilogue to this story occured in 1994, when my dad's own life was also taken from him at an age far too young, 35, leaving behind his own small family (my mom, my sister, and me). I've never wrote at length before about the similarities my dad shared with Thurman Munson, but it makes me happy to do so. Both were great men, and both were great fathers.

I hope you enjoyed this Father's Day story and wish all of you (and your fathers) a happy Father's Day.