This wasn't a classic in terms of the quality of play, but it was in terms of drama. It was the longest game of the major league season so far (15 innings), it included gems from both starters (combined 15 ip, 0 er), a blown save by Mo Rivera, countless runners stranded on base, a Yankee getting beaned in the head, A.J. Burnett running the bases, a ML debut in extra-innings, and a runner making an out because he got hit by a grounder.

Bart. Oh, Bart. You so deserved the win tonight, but the greatest closer of all time blew the one run lead. I have to say that I did agree with Girardi's decision to go to Rivera even though Bart was only at 87 pitches, because 1) Bart seemed to be tiring, and 2) well, it's (a rested) Mariano freakin' Rivera. But like every decision Girardi has made lately, it turned out wrong. He needs a lesson from George Costanza. It wasn't like Mo was bad: he allowed one hard-hit ball, then a seeing-eye single and a sac-fly.

Zach Britton was great too, and let up the one run on an error and sac-fly, but Bart was just a little better.

The teams combined to go 5-28 with RISP against the 14 pitchers used.

How strange is it that between Bartolo Colon, Rivera, Luis Ayala, Boone Logan and Hector Noesi (in his ML debut), it was Rivera who allowed the only run of the game?

Observations from the extra innings -

Jeter's 12th-inning AB: He allowed a pitch right down the pipe, then hacked at every pitch after that, which were all in on his hands, eventually hitting a weak groundout (teams are starting to play a very shallow infield against him).

Noesi looked good, especially considering the nerves he must've felt making his big league debut in the 12th-inning of a tie game. He struck out the first two batters he faced and touched 95 MPH on the gun. He deservedly got the win after going four scoreless frames.

14th: Runner on 2nd, none out = no runs. In the bottom half, Felix Pie's drive to wall was cardiac-arrest inducing.

Finally, in the 15th-inning, the offense broke out: Tex single, A-rod single, Cano two-run double on the first pitch he saw.

Dickerson got hit in the head three pitches later and was seemingly knocked out for a few seconds. A.J. Burnett of all guys pinch-ran for him so that Girardi could stick it to Posada, the last guy on the bench.

(No, I'm sure he wanted to save at least one position player just in case.)

By the way, is it not time yet to promote either Jesus Montero or Jorge Vazquez?

This graph is a thing of beauty. It's Bart's velocity through the game - 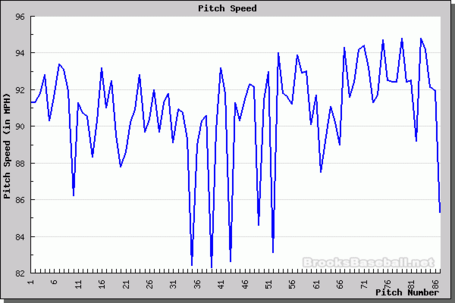 Notice how it went up as the game wore on.