When Pitchers Get Offensive

Share All sharing options for: When Pitchers Get Offensive

Earlier in the week, Pinstripe Alley was host to a point and counterpoint about the merits of the designated hitter. Although both sides made compelling arguments, my intention isn't to cast the deciding vote (for the record, I kind of like having each league play by its own set of rules). Instead, I'd rather settle the question about just how bad pitchers have really become with the bat. 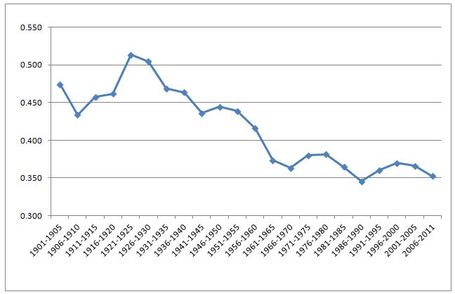 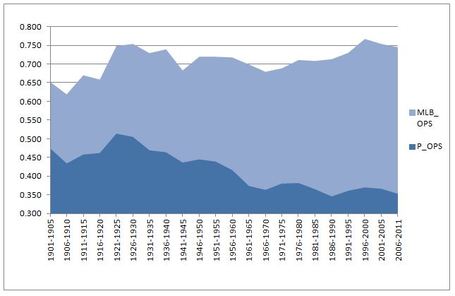 As evidenced from the charts above, which break down the modern era into five-year segments, pitchers have experienced a precipitous decline in terms of their offensive production. However, the inflection point occurred long before the DH was introduced in 1973. In fact, since 1961, the OPS compiled by pitchers has been relatively stable, which suggests that if there was a turning point, the expansion of each league in 1961 and 1962, respectively, may have been the catalyst. Not surprisingly, pitchers were at their most potent during the early days of the modern era, peaking as a percentage of total offense when (and probably because) Babe Ruth was in the starting rotation. Since that time, moundsmen have gotten progressively worse as hitters, culminating in a plateau that helped usher in the DH.

Although one might have expected the gulf between pitchers and the rest of the offense to widen in the immediate aftermath of the American League's adoption of the DH, pitchers collectively posted an OPS that was 53.6% of the output of major league rate from 1976 to 1980, or almost exactly the ratio seen during the entire decade of the 1960s. Since 1986, however, that comparison has hovered around 48%.

Why it took until the 1980s for the offensive contribution of pitchers to wane relative to the rest of the lineup is hard to say, but perhaps teams were reticent to embrace the DH as a unique position best suited for a slugger, as opposed to being a slot for rotating a series of bench players? Based on the aggregate performance of DHs, which peaked at an OPS of .833 from 1996 to 2000, this seems to be the case. It should be noted, however, that pitchers in the National League have also shown a similar steady decline versus the NL-only league average OPS (interleague DH at bats included), albeit at a slightly higher relative percentage, suggesting that, all things considered, pitchers have become weaker hitters, but perhaps not as much as the conventional wisdom suggests. 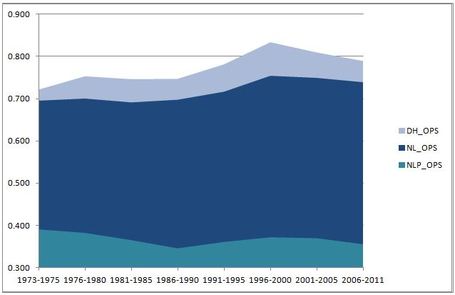 So, what exactly have we proven? Basically, pitchers have never been very good hitters, but at no time has their contribution to offense been less than at the present. Of course, that doesn’t mean every pitcher since the advent of the DH has been a liability. Although not many modern pitchers can really be called good hitters, the continually declining bar for the group as a whole makes those who can handle the bat that much more valuable. Offense will likely never come close to making up a significant portion of a pitcher’s value, but in this day and age of finding underappreciated assets, even the smallest edge can make a difference. In honor of the rare breed of pitcher who can swing a bat without embarrassing himself, a list of the 10 best are presented below (alongside the 10 worst to better highlight the achievement).

Ten Best and Worst Offensive Pitchers Since 1973, Ranked by wOBA 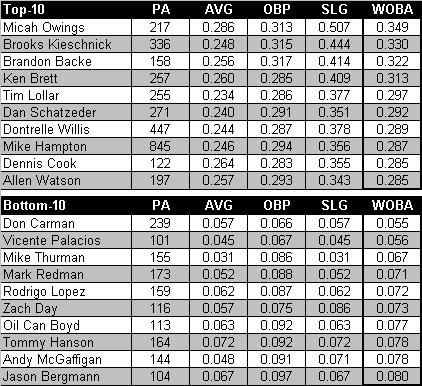 (In case you haven’t read enough about the DH debate, click here for a look at the relative interleague performance of DHs and pitchers by league. Also, for a study looking at the correlation between these outcomes and individual team winning percentages in interleague, click here).