Has Prospect Mania Reached The Point Of Insanity?

Share All sharing options for: Has Prospect Mania Reached The Point Of Insanity?

The Yankees have had a a glaring need for quality starting pitching even before Cliff Lee spurned them last offseason, yet during this time there has been no shortage of good starters available. Mat Latos, Trevor Cahill, Gio Gonzalez, Dan Haren, and Zach Greinke have all changed hands since July 2010, all of them with at least two years of team control (and often several more) at below-market salaries remaining, and any one of them would undeniably rate as the Yankees second-best starting pitcher today.

Yet Brian Cashman has sat on the sidelines, either wisely or foolishly, depending on your point of view, unwilling to part with the minor league prospects necessary to acquire that mythical #2 starter.

I understand that prospects provide flexibility for a team that's loaded with expensive veterans on long-term deals, so it makes sense for Cashman to incorporate some of them into the team's plans. However, the Yankees' primary objective isn't simply to be young and cheap, it's to win, and I fear he and Yankees fans alike are overlooking the obvious.

Jesus Montero, Dellin Betances, and Manny Banuelos are all outstanding prospects, but expecting even one of them to be a star player on a future Yankees World Series winner goes against the odds based on what we know from history. Let's repeat that, just so it sinks in.

Jesus Montero, Dellin Betances, and Manny Banuelos are all outstanding prospects, but expecting even one of them to be a star player on a future Yankees World Series winner goes against the odds based on what we know from history.

To illustrate this point, below is an analysis of the career fWAR totals of Baseball America's top 25 prospects from 1997-2001, and the results shouldn't be shocking to anybody who's followed baseball for more than a few seasons: 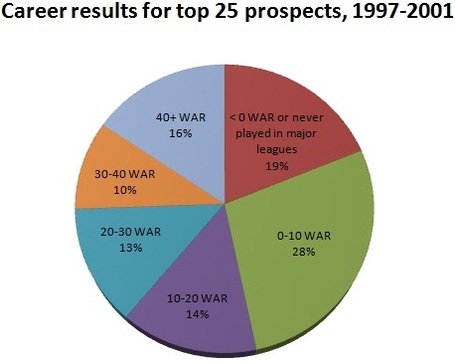 Carlos Beltran, CC Sabathia, and Roy Halladay are all on this list, but so are Dee Brown (-4.3 career fWAR), Karim Garcia (-3.5), and Ryan Anderson (never played in the majors), and there's no way to tell them apart as they break into the major leagues.

I realize there's a high degree of subjectivity involved in defining a "good" career, but nearly half of these prospects failed to break the 10 WAR barrier when they hung up their spikes for good. That's clearly a disappointment. Add to them the players who bounced around several organizations before achieving success (Carlos Pena), were good but struggled with injuries (Nick Johnson, Mark Mulder), or put up unglamorous, but nevertheless solid numbers (Eric Milton, Jose Cruz Jr, Matt Clement), and it means that at least two thirds of these prospects came nowhere close to meeting the kind of expectations now being placed on Jesus Montero, Dellin Betances, and Manny Banuelos.

Despite the high rate of prospect failure, I concur that it's foolish to trade talented prospects in the kinds of deals the Yankees routinely made back in the 1980s. But refusing to part with any of them to acquire young, cost controlled talent that fills a clear need on the team makes even less sense than swapping Jay Buhner for Ken Phelps.

Yet the insanity continues.

I asked this question, borrowed from River Avenue Blues, on Friday night:

Thousands of pitchers have appeared in the major leagues, and for all of his flaws, AJ Burnett has had a better career than all but 300 or 400 of them. Betances, on the other hand, has some serious control problems and hasn't yet thrown two dozen innings above AA ball, and if you consider Burnett's career to be a disappointing outcome for him....well, I'd hate to see the look on your face after you buy lottery tickets and realize you didn't win.