One-Timers: Does Pujols’ Exodus Mean Loyalty Is Dead in Baseball?

Share All sharing options for: One-Timers: Does Pujols’ Exodus Mean Loyalty Is Dead in Baseball?

Albert Pujols was supposed be the next Stan Musial: a lifelong Cardinal who would represent St. Louis baseball with awesome talent on the field and admirable dignity of it. Over the past decade, the succession from Stan the Man to Prince Albert seemed so natural, as if both men descended from the same line of baseball immortals. Now, however, there are over 250 million reasons why it won't happen.

You can debate whether Pujols or the Cardinals undervalued the importance of legacy, or whether it is even important at all, but, regardless, the fact that Albert Pujols will not retire in St. Louis has been the cause of great lament. According to the common woe, the days of players spending their entire careers with one team have become a thing of the past. Gone is the purity of loyalty, and its place, the greed of business has taken hold. But does such sentiment reflect reality? Have modern baseball players cast loyalty aside in favor of chasing the very last dollar?

Most Seasons with One Team, Since 1901 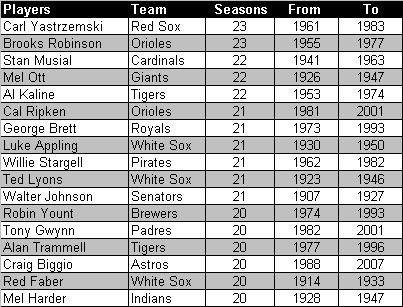 Since 1901, only 146 players (90 position players and 56 pitchers) have had lengthy careers with only one team (see below for criteria), so it seems as if staying in one place has never really been prevalent. And, contrary to popular belief, one-team players aren't a relic of the golden age. During the modern era, the number of those wearing one uniform has fluctuated (based on retirement year) by decade, but not at levels that would suggest a major sea change. Although the number of players retiring as one-team loyalists has gradually declined from a peak during the 1980s, recent totals do not qualify as historical outliers. Granted, there are several mitigating factors to consider. On the one hand, having more teams means more players, so the relative numbers are much smaller than the nominal. However, when you consider free agency was not implemented until 1976 and players' careers are much longer, both providing opportunities for migration, the comparison remains in line. 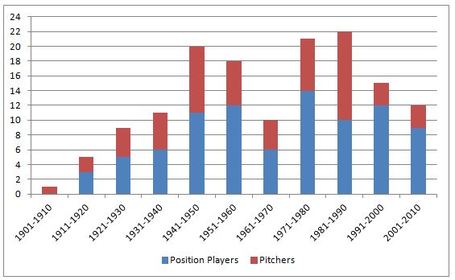 Note: Based on a minimum of 10 seasons and 4,000 plate appearances with one team for positions players, and 10 seasons for pitchers. Year of retirement is used as basis for enumeration.
Source: Baseball-reference.com

Besides Albert Pujols, Mark Buehrle, who spent 12 seasons with the White Sox, is another example of a player who broke the bonds of a one-team relationship this offseason. And, with Jorge Posada, Jason Varitek, Michael Cuddyer, Aaron Cook, and Jimmy Rollins all on the market, there could be more to follow. However, it should be noted that with the exception of Rollins, if any of the aforementioned names don a new uniform next season, it will be because their old teams no longer wanted them. Fans usually think of a loyalty as a one-way street heading in the team's direction, but often times, when a long-time favorite parts company, it's because he has no other choice. 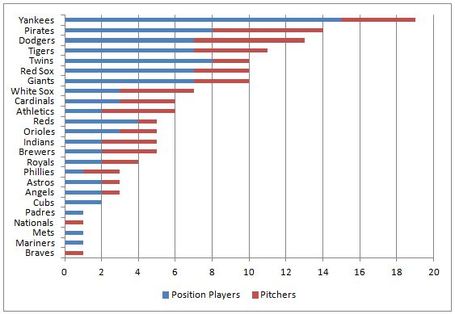 Note: Based on a minimum of 10 seasons and 4,000 plate appearances with one team for positions players, and 10 seasons for pitchers. Year of retirement is used as basis for enumeration.
Source: Baseball-reference.com

In addition to the five players mentioned previously, there are nine others who currently meet the one-team criteria outlined above. Included in that group are four sure-fire first ballot Hall of Famers (Chipper Jones, Derek Jeter, Mariano Rivera, and Ichiro Suzuki), two of which are Yankees. The latter fact is not surprising because no team has had more legacy players than the Bronx Bombers, who stand to add three more if Posada, Jeter, and Rivera retire in pinstripes. The high percentage of Hall of Famers also shouldn't be a surprise. Approximately 25% of those enshrined in Cooperstown played for only one team (versus less than 10% for all "long-time" players).

Hall of Famers, by Franchise Count 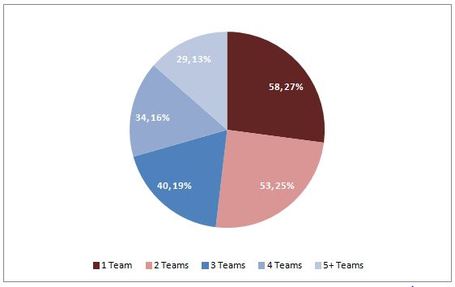 Note: Total numbers may vary from official Hall of Fame figures because of classifications like executive, manager and umpire, as well as players who spent most of their careers in the Negro Leagues.
Source: baseball-reference.com

Even though there may not be as many one-team players as the recent past, they are far from a dying breed. With young superstars like Troy Tulowitzki, Ryan Braun, Matt Kemp, and Joe Mauer, all of whom recently signed long-term contracts with their maiden team, poised to assume the mantle, the next decade is sure to have it share of legacy players. If you're a Cardinals' fan, it's ok to cry because you lost Pujols. However, baseball fans have no reason to lament. Loyalty still exists in the game. Well, at least as much as it ever has.