Posada: What, Him Worry?

Share All sharing options for: Posada: What, Him Worry? 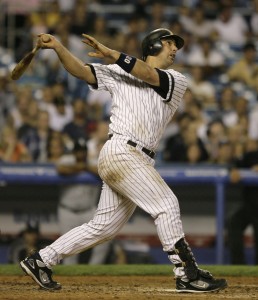 Jorge Posada: What is he supposed to do, put himself in a glass case? (AP)

Earlier today, veteran journalist Bob Klapisch tweeted this response to stories that Jorge Posada had reached out to the Mets for a job:

Have huge respect for Posada's career, but fact that he called #Mets looking for work says he's willing to jeopardize Yankee legacy. Why?

I like this concept of "legacy jeopardy" about as much as I like the "true Yankee" idea, which is to say not at all. The Yankees are done with Posada. He wants to keep playing. If the story is true, he would like to do so in the New York area. If so, the Mets are his only option, and there is no sin in that.

Should Posada play for the Mets (if it happened, he was apparently rebuffed), it will do nothing to change the reality that he was one of the top five catchers in Yankees history (in no particular order, Bill Dickey, Yogi Berra, Thurman Munson, Elston Howard and Jorge, with a tip o’ the hat to Mike Stanley for a terrific short-term run), the two top-ten MVP ballot finishes, the five Silver Slugger awards and All-Star Game appearances, 11 postseason home runs, and four championships.

Yogi Berra didn’t harm won hair of his legacy when he became a Mets player-coach in 1965, and subsequently the team’s manager. Babe Ruth was still the most beloved Yankee of his time despite going to the Boston Braves in 1935. At the time of his death, Thurman Munson was campaigning to be traded to the Cleveland Indians. Had it happened, he still would have been the guy who was a seven-time New York Yankees All-Star. Perhaps I’m naïve, but I don’t think the fans are so simplistically tribal. I’m open to correction.