Share All sharing options for: Starting a Franchise From Scratch: Mike Stanton

If you were a general manager tasked with building a roster from scratch, which player would be the centerpiece of your strategy? There are many factors to consider when answering such question, including, but not limited to, track record, position scarcity, relative health, contract status and future potential. Earlier in the week, several Pinstripe Alley writers took a stab at solving this riddle, and each made credible selections (Clayton Kershaw, Troy Tulowitzki, Ryan Braun, and Evan Longoria). However, if I was drafting behind them, I'd be elated that they all passed on the Marlins' Mike Stanton.

Before breaking into the big leagues in 2010, Mike Stanton was considered by many experts to be among the top prospects in the game, so his pedigree is strong. However, there were some concerns about whether he could adapt to major league pitching, particularly with regard to pitch recognition. Well, after an impressive rookie season in which he posted an OPS+ of 118 and wOBA of .355 at the age of 20, Stanton took his game to another level in 2011. Not only did the young right fielder increase his respective rates to 141 and .378, but he did so by walking more (11.6% vs. 8.6%) and striking out less (27.6% vs. 31.1%). Although there is still room for improvement in both areas, the early returns are very encouraging.

With fewer than 1,000 plate appearances under his belt, Stanton has not yet established a true track record, but if his comparables at this early stage are any indication, he could be in for a very special career. In his first two seasons before the age of 22, Stanton has posted an OPS+ of 131 and bWAR of 8.5, which rank 11th and 18th all-time among players at a similar point in their careers. Considering the elite level Hall of Famers present on both lists, it's hard not to get excited about Stanton's potential.

Theoretically, the best positions around which to build a team are located in the center of the diamond. However, it's worth noting that over the last five seasons, the average wRC+ by the five best players at each position suggests top-hitting right fielders may not be as plentiful as one might think. Regardless, Stanton's mix of strong defense and prolific offensive potential make him a valuable commodity at any position on the field. 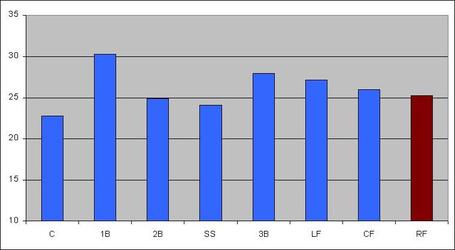 Finally, Stanton isn't arbitration eligible until 2014 and can't file free agency until 2017, which are not insignificant considerations. With the 21-year old right fielder under control for five more seasons (at a cost that should be well below his production level), a franchise starting anew with Stanton would not only get the instant gratification of a great player, but also plenty of financial flexibility to round out a competitive roster.

Mike Stanton's combination of athleticism, baseball acumen and rapid development has put him a career trajectory to rank among the best players in the game for the next 15 years. That's not a bad place to start from scratch, and, perhaps, one way to build a winner in an instant.