Pitching for Offense: Yankees' Call to Arms Should Not Ignore the Bats

Share All sharing options for: Pitching for Offense: Yankees' Call to Arms Should Not Ignore the Bats

Pitching, pitching, and more pitching. That has become Brian Cashman's mantra when addressing questions about his offseason plans. But should that be his only focus?

As we enter the process this winter, I don't anticipate a bat being of need at all. Offense is not an issue that we'll be focusing on. It will be the pitching. I feel our offense is very, very strong.

Last year, the Yankees offense was very strong in terms of run production. In fact, it was historic when compared to the league average. However, a couple of warning signs are evident (albeit relatively minor) when you take a look under the hood.  As illustrated in the chart below, at the same time the Yankees' average run total per game spiked, the underlying performance of the offense, as measured by OPS+, dropped to its second lowest level since 2001. Also, although the lineup's 2011 wRC+ of 113 was healthier than last year's, it was still off recent highs in 2007 and 2009. Until 2010, the Yankees' relative run production had an almost perfect correlation to weighted Runs Created and adjusted OPS (r2 of .97 and .93, respectively), so unless the divergence experienced over the past two years is sustainable because of an underlying dynamic (improved base running and lots of homeruns?), Cashman should at least be mindful about the possibility of these lines converging in 2012. 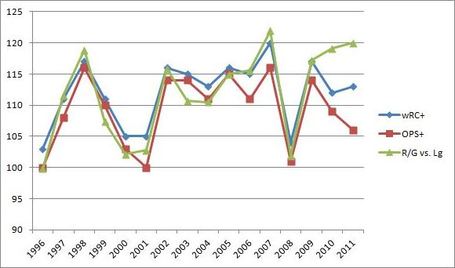 Note: R/G vs. Lg is the Yankees' R/G divided by the league average.
Source: fangraphs.com, baseball-reference.com, proprietary calculations
On an individual basis, the general trend line for the Yankees' lineup has been down. Most significantly, the performance of three of the team's main cogs, Derek Jeter, Alex Rodriguez and Mark Teixeira, has declined meaningfully since 2009. Considering the players' ages, it's hard to bank on a cumulative rebound from 2011 levels, so, if further declines occur (or injuries, particularly in A-Rod's case), the Yankees would need to pick up the slack elsewhere. However, aside from Robinson Cano, there really isn't a member of the lineup from whom you could confidently expect an improvement over 2011.
Three-Year Trends Among Yankees' Hitters: wRC+ and OPS+ 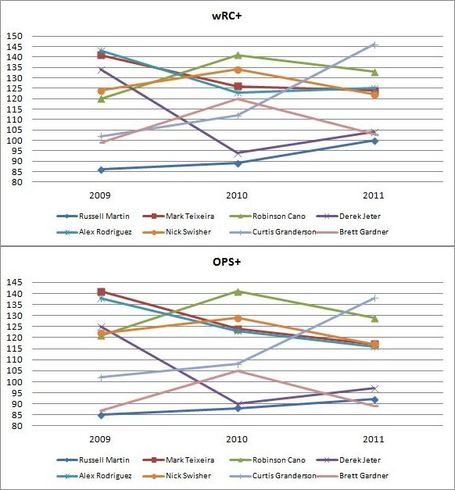 The wild card in the Yankees' 2012 offense is Jesus Montero, assuming he isn't traded for one of those pitchers, pitchers, pitchers. After his impressive debut at the end of last season, there's every reason to believe he'll be able to provide the offense with a boost. Still, the Yankees can't lose sight of the fact that Montero will be only 22 next season and, therefore, must anticipate at least a minor adjustment period as the young catcher gets used to both increased play timing in the majors and his likely role as a DH. Considering how slowly Montero started each of his past two seasons in Scranton, there could be some early bumps in the road during his first full season in the Bronx.

So, what can the Yankees do to mitigate some of the concerns about the offense? Because the team has an established player at every position, and a promising rookie ear-marked for the DH role, Cashman doesn't have the flexibility to make a big move. In the abstract, names like Prince Fielder and Albert Pujols are probably tempting to Yankees' fans, and perhaps even some members of the inner circle, but a big ticket item simply doesn't fit well within the current roster construction.

Unless the availability of a young, dynamic player like Hanley Ramirez forces the Yankees' hands, much like Alex Rodriguez did in 2004, offensive improvement will have to come on the margins. Instead of simply bolstering the bench, however, a better strategy might be to find a "10th man"...almost like what the Rangers have in Mike Napoli. Granted, those kinds of players are hard to find (although, ironically, Napoli was practically given away twice last off season), but someone like Martin Prado would fit the bill.

According to several reports, the Braves have been actively shopping Prado, so he could be the ideal buy-low candidate for a Yankees' team in need of depth and versatility (perhaps as part of package deal including Jair Jurrjens?). Prado, who posted a wOBA over .350 in the three seasons before last, would be particularly attractive to the Yankees because he can play both third base and outfield. Not only would his presence allow the Yankees to DH Arod more often without suffering on offense and defense, but he could also serve as the right handed complement to the Yankees' predominantly left handed outfield. What's more, Prado has hit equally well against lefties and righties over his career (wOBA split of .338/.339), so his playing time wouldn't be constrained by the opposing pitcher.

Doomsday scenarios are often popular among Yankees' fans, but chances are the Bronx Bombers will again have one of the top offenses in 2012. A healthier A-Rod, improved Teixeira, and more patient Robinson Cano could be all the Yankees need to sustain the offensive prowess that has become a team hallmark. However, that doesn't mean Cashman should completely turn his back on the offense. Although pitching should be the Yankees' offseason priority, even a small improvement, whether it be an arm or a bat, can make the difference in an increasingly competitive AL East.