Not much activity in the Hot Stove League today. I suspect if we just started referring to it as the Hot Tub League, we’d get more news.

Kirk Gibson
As was expected by almost everyone, Arizona’s Kirk Gibson walked away with the National League Manager of the Year 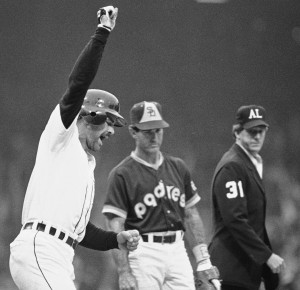 Kirk Gibson trots past Steve Garvey after homering in the 1984 World Series. (AP)

award. Although they consistently bombed the Yankees during Gibson’s playing days, there was much to admire about the Tigers in his day. A wide receiver at Michigan State, Gibson was one of the best pure athletes in baseball at that time. He had a few limitations—he lacked a good arm, had the left-handed hitter’s usual problems with same-side pitching, and spent more than his share of time on the disabled list—but he could hit for power and fly.

I have always wondered if Gibson would have been a Yankee had collusion not restricted free-agent signings in the mid-to-late 1980s. Gibson first hit the free agent market after the 1985 season. He was 28 and had just come off of two virtually identical seasons in which he hit a combined .284/.364/.517. The Yankees had two Hall of Fame-quality outfielders in Rickey Henderson and Dave Winfield, but they were both right-handed and left field was a mix of Ken Griffey the Elder, Billy Sample, Henry Cotto, and Dan Pasqua. Griffey was very good player but was getting up in years and reportedly wasn’t all that thrilled to deal with the chaos of the Yankees at that time. Gibson would have given the Yankees a lineup that looked like this:

Now that I have typed out "Meacham" there, I realize that Gibson might not have been enough. Say "alas" for a man’s youth misspent watching E-6s. Those too young to identify, imagine 156 games of Eduardo Nunez at short and you will have some sense of what I mean.

Gibson was a free agent again after the 1987 season and somehow made his way to the Dodgers, winning the 1988 National League MVP and hitting a legendary home run in the World Series. The Yankees still had need for a top outfielder/DH that winter. They responded by signing Jack Clark away from the Cardinals. Clark was a tremendous hitter, but a poor fit with the Yankees and with Yankee Stadium (though the Yankees altered the left field fences for him), and he lasted but one season before being traded. Even though Gibson spent significant time from 1988 on healing various injuries, I still think he would have been the better choice.

Manny Banuelos in Aspic
I keep hearing that Manny Banuelos will not be traded this offseason, and in theory that is a good thing. The lefty is not yet 21 (that comes in March), and like almost all hard-throwing young lefties, still has control problems to overcome. There is no rush to get him to the big leagues, even though the Yankees could surely use the help right now. Having said that, there are so many rumors flying about as to the Yankees checking in on C.J. Wilson, Roy Oswalt, Mark Buehrle and the like, and none of those players are going to be one-year commitments. CC Sabathia isn’t going anywhere, A.J. Burnett is signed forever and seems unlikely to disappear all that easily, if the Yankees even want him to—a classic case of Stockholm Syndrome seems to have set in with him—Phil Hughes and Ivan Nova are still under club control, even if their futures are murky. With just a signing or two, the rotation could be blocked, and Man-Ban Batman first fought him in Detective Comics #400) will be stuck waiting for a serious injury or the inevitable wise-up on Burnett before getting his shot.

This leaves me asking what seems to be one of my usual questions: if prospects are like produce and they are getting closer to their expiration date with every passing moment, and if pitchers are like, well, pitchers, and every pitch they throw brings them a step closer to the surgeon’s knife, then why the heck not trade them if you’re not ever going to use them? Again, this question does not apply as neatly to Banuelos as it does some of the team’s other prospects given Banny’s youth and lack of refinement. Still, he’s only a top prospect until he breaks, and if he brings you someone very good that is going to help you get better today, maybe you make a move.

Given the overall paucity of pitching, it is a hard thing indeed to say that teams overvalue their pitching prospects. What I am trying to say is that they overestimate the window in which they are exploitable for their greatest value, whether to the team itself or in trade. You hold on too long at your peril.