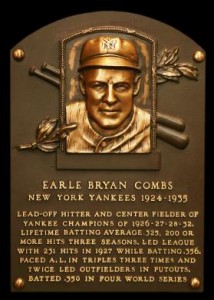 I always wonder how many readers actually care about the Yankees past this year, or the last few years, with the cutoff on their interest always moving forward, day by day. I know my traffic reinforces this pattern. If I write about the impact of a minor injury (hence today’s headline), I get far hits than were I to tell you an even better story about, say, Bob Meusel.

I suppose that’s to be expected, given the speed with which we churn news and info these days, but the news is meaningless without context and, hell, I love a good story—I don’t care when it comes from.

This question of interest has come back to me several times over the last few years as several Yankees, principally Derek Jeter, climbed various Yankees’ career lists. The names below him were not merely steps for him to stand on—if so, he was climbing a staircase laid in gravestones. Those players lived and, in just about every case, we know more about them than we do about the intensely private Jeter.

When Jeter passed shortstop and longtime coach Frankie Crosetti on the team’s career runs scored list, did anyone wonder how "Crow’s" 1006 runs scored figured in the team’s story, or even when it figured? In the age of Robinson Cano, how many recall how good the understated Willie Randolph was? I’m not looking at you fans of my vintage, but those who came after—do you know that at his best, no. 30 was every bit as good as Cano? When Jeter passed Earle Combs, did anyone think about all the bones that the "Kentucky Colonel" shattered on the outfield wall?

If you haven’t looked it up, you won’t know. The broadcasters, radio and television, don’t tell you; that stuff isn’t generally in the notes. History requires you to opt in, to give a damn about what came before. It’s actually something that present-day marketing regards as anathema, because it gets in the way of whatever the sales item du jour is—history defeats cults because it makes you aware that no player (or man/woman/president/senator/actor/actress/parakeet) deviates from the great procession by more than a few steps, here and there, and that without the existence of Ruth, Gehrig, Mantle, DiMaggio, and, yes, Combs and Crosetti, what a Jeter does would be impossible to conceive. What does 3000 mean if there are no other numbers around it? It could mean even more if we were more aware of the stories behind those numbers.

As far as the Hot Stove League goes, you’ve heard about the Yankees knocking on the doors of C.J. Wilson, Edwin Jackson, and so forth. You know me; I’m all about taking a chance on youth rather than the dependably mediocre. The story on Jackson is an old one for such a young pitcher: you don’t know what you’re going to get. That said, with better defensive support, Jackson will look like a different pitcher than he did this year, when neither the White Sox nor the Cardinals gave him much help in that department. But are the Yankees the team that will change that for him?

As for Wilson, the story is atypical. He’s going on 31, has put together a terrific record the last two years, and you don’t know how his starting workload will affect him in the future because he’s really just getting started after years as a reliever. I would suspect that 31 is 31 is 31 and that the shape of his career is less important than the progress of cellular degradation we all go through as we age, or the little micro-tears that accumulate in any pitcher’s shoulder as time goes by and eventually saps their stuff.

I also remain curious as to the new Collective Bargaining Agreement will revise draft compensation such that the Yankees get to retain their first-round pick regardless of who they sign. Overall, though, I would still rather see the Yankees devote a rotation spot or two to trying out some of the many kids who have proliferated in the minors.

If you’ve been reading, you know this. My philosophy, in baseball and in life, is to gamble on the upside, especially if the gap between success and failure is so small as to make the very use of the term "gamble" questionable.

Reactions as news breaks. For now, we wait.