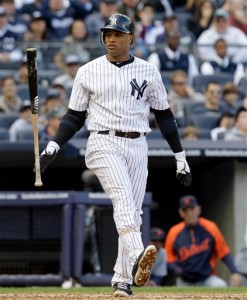 Because a deal is a deal, the Yankees will negotiate with Robinson Cano when it suits them, not when it suits agent Scott Boras. (AP)

Scott Boras may be a lot of things — the most powerful agent in the game, the worst nightmare of a general manager, the Devil's cabana boy — but he's rarely accused of being dumb. Still, I have to chuckle at this item, as passed along by LoHud's Chad Jennings:

As noted earlier, the Yankees hold options on Cano's next two seasons, at $14 million for 2012, and $15 million for 2013. Those options, which are tacked onto the four-year, $30 million extension the star second baseman signed in February 2008, were negotiated by Boras' predecessor, Bobby Barad. Which means that he, not Boras, makes the commission on the exercise of those options, despite the fact that Cano parted ways with him last February. If the contract were renegotiated, that commission would belong to Boras instead, hence the impetus for the agent wanting a new deal.

It's the overwhelmingly negative response to Boras' suggestion, both from the press and the team, that has Boras trying to laugh this one off the way one might after telling his boss or future father-in-law an inappropriately timed off-color story about a rabbi, a goat, and a farmer's daughter. Via the Post's George King III (not to be confused with the mad King George III), Boras said that Brian Cashman didn't even return his phone call. "Cash and I have talked three or four times in the last three days. My statements were in jest. Cash always returns my phone calls."

He may or may not have added the following: "Dude, we weren't serious about Cano retiring to play in the Outer Mongolian Independent Basketball League, or having a third arm grafted to his torso to increase his range, or playing James Bond in the next 007 movie, or being serious about his threat to keep Francisco Cervelli in a wooden crate for the winter, with nothing but shredded lettuce and newspaper..."

As funny as it all may be, you can bet that Boras will have the last laugh down the road, whenever it is that he and Cashman — whose deal to return is said to be done — sit down to hash out a long-term deal at a more appropriate time.