Waiting for the Girls Upstairs

Share All sharing options for: Waiting for the Girls Upstairs

This has been a compelling postseason, including a World Series that has been both exciting and, in Game 5, strange. Thanks to the Yankees bowing out early, little of it has had anything to do with the team in the Bronx, though if you choose to view the events through a particularly myopic set of eyes, everything has to do with them, the games serving as little more of an audition for this winter’s free agent bidding. 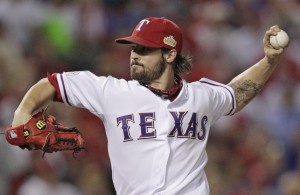 This approach is, to put it simply, a drag. First, it prevents one from seeing the World Series on its own merits—this is the championship, not an exhibition run for the benefit of Brian Cashman. Second, and perhaps more importantly, the Yankees don’t need what is on display here, shouldn’t want it, and should be revolted by what they’ve seen so far.

Yes, the Yankees need starting pitching. Assuming the CC Sabathia opt-out situation resolves with the big man still part of the team, they are 1-for-5 in dependable starters. However, they have minor leaguers with the potential to be as reliable as anyone in this year’s free agent class. Edwin Jackson is 27 years old, has good stuff but limited ability to execute with it, and will carry a career 4.46 ERA and membership on six teams in nine seasons into free agency. C.J. Wilson has been an excellent pitcher the last two seasons, but he’s also going to be 31 and has pitched 427.1 innings in that period, a number that wouldn’t seem significant if he hadn’t been in the bullpen to that point—what the workload means in his unique case is difficult to know. That he has been fairly miserable in the postseason this year and last probably speaks to the limits of his endurance.

Jackson, for all of his painful inconsistency, is at least young. A five-year contract to Wilson is not just likely to pay him for injury and decline, it is almost guaranteed to do so. Gambling on the kids would be preferable, unless the Yankees want to give a pitcher five years’ worth of coin for two years of performance. As for Jackson, he pitched in front of two sketchy defenses this year, which means he was likely a little better than he looked. Applying some very gentle and unscientific translation to his results suggests that anticipating a 4.00 ERA from him in the future wouldn’t be overly optimistic. That’s something, but is it worth the money and the commitment when you have kids that could give you something approximating that for less?

Given A.J. Burnett, Phil Hughes, and the second halves of Bartolo Colon and Freddy Garcia, the Yankees probably have room for both imported vets and kids, but given the organization’s mindset, you know that the latter are going to be looked on as a last resort, and the fans will likely not be rooting for homegrown talent next spring, but for more transient mercenaries of the mediocre kind.

That’s why, as much as I’m enjoying this World Series, I’d be enjoying it more if I didn’t feel as if, with every strikeout by a coming free agent, some Yankees executive wasn’t sitting in front of his television shouting, "Sign that kid up!"