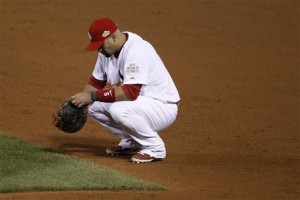 Albert Pujols' failure to answer for his part in Thursday's ninth-inning mishap wouldn't have flown in the Bronx. (AP)

Even if you don't have a dog in the hunt, or bear equal apathy (or antipathy) towards both teams, the first two games of this year's World Series have been gripping ones, tight one-run affairs with good pitching (something that was in short supply during both League Championship Series) and a fair bit of late-inning intrigue. In Thursday's Game Two, a ninth-inning mistake by the Cardinals' Albert Pujols loomed large. The Rangers' speedy Elvis Andrus hit a single to center field, and Cardinals' center fielder Jon Jay made a lackadaisical toss back to the infield, where the relay eluded Pujols, tipping off his glove and dribbling to catcher Yadier Molina. Andrus alertly zipped for second base on the poor throw, and two sacrifice flies later, scored the game's decisive run.

After the game, Pujols reportedly bolted the locker room without talking to reporters, as did Matt Holliday, Lance Berkman, and Molina — four of the lineup's biggest names. That left the likes of closer Jason Motte (who had given up the two hits that scored and then was unceremoniously yanked), Jay, and others — lower-salaried, all of them — to face the postgame grilling and try to answer for their missing teammates. Predictably, there's a fair bit of media outrage circulating today, some of it admittedly overwrought, but most of it is right. Win or lose, talking to the media is part of the job of being a professional ballplayer. The league mandates availability, and the actual nuts and bolts of when the media can access players is something that's negotiated in the Collective Bargaining Agreement. Particularly in a nationally televised game which hundreds of outlets are covering, the ability of reporters to collectively cover a multitude of angles by talking to a variety of players is vital — otherwise you've got 100 newspapers and media giants reporting the same story.

Players often lapse into cliches and non-answers when the microphone is thrust into their faces, particularly after tough losses, and even in the best of times, they can fall short on insight. But most do make at least some amount of effort to explain what went on to reporters' satisfactions. They understand that such coverage drives the economy of sports; print, television, radio and internet provide what is effectively advertising for the game, stimulating the interest of both the casual and the hardcore fan with their varying angles. It's a delicate dance, but an essential one that brings an audience whose presence — whether in the ballpark or at home via their media vehicle of choice — helps pay salaries.

One key element of the past decade and a half of Yankee baseball has been the organizational emphasis on accountability. From superstars like Derek Jeter and Mariano Rivera on down, players stand in the glare of the spotlight and accept the tough questions that come with falling short just as they do the softball ones when they win. When one steps out of line, such as when Rafael Soriano blew a four-run lead in the first week of the season, then disappeared without answering questions, they get an earful from the local media for doing so, and presumably an even louder one from behind closed doors as well. A day after his disappearance Soriano sheepishly offered an apology. Said Brian Cashman of the situation, "Everyone has to realize it’s an important aspect of the job. Not just playing on the field but being accountable in that clubhouse."

Cashman is part of that culture of accountability as well; the flip side of wrestling control from George Steinbrenner's often faceless Tampa contingent has been his candor in owning up to his mistakes, and we've certainly heard plenty from him on that subject in recent years. Joe Torre survived 12 years on Steinbrenner's hot seat as well because he could foster that culture through leadership by example. Jeter is the captain of the team for the same reason. Those people aren't role models just to children but to adults as well; in my previous life as an art director in the graphic design industry, I learned a thing or two about accountability from Torre, David Cone, and other late-Nineties Yankees, and those lessons still help to guide me.

Fans may not believe that this matters to them in the way it matters to on-deadline reporters, but incidents like Pujols' postgame no-show change the tenor of coverage around the game and the team. When players or higher-ups aren't accessible or willing to be accountable, the media finds other ways to fill its column inches or its airspace, and it's generally not pretty. Vitriolic articles get written, often studded by players and management airing their grievances from behind a veil of anonymity, usually with more rancor than if they had their names attached to what's been said. It's a poisonous cycle that can tear a team apart. For most fans, it's no fun to read about, either.

For Exhibit A, look no further than the meltdown that has happened in Boston. The Red Sox shocking collapse not only included some exceptionally poor play but a distinct lack of accountability from some of the senior players. Ultimately, that reflected poorly on both the players and the manager, which is why Terry Francona was forced out of town despite winning two World Series in the past seven years. It's why the Boston Globe sent an investigative reporter chasing some of the more salacious details about what went on behind closed doors — beer, fried chicken and video games, oh my! — a whole lot of which happens in 29 other clubhouses as well. Aided both by senior executives and by low-level club employees, who collectively had no shortage of axes to grind, it was conveniently used to craft a narrative of organizational drift, squeezing out an accomplished manager (the details of Francona's personal life being the most over-the-line part of the whole show) and alienating a wise-beyond-his-years general manager, Theo Epstein — a duo that had combined to bring the franchise more glory than it had experienced in the previous nine decades. Epstein has chosen to ply his fortune in another long-suffering baseball market, the north side of Chicago; perhaps he would have stayed had this mess not gotten so out-of-hand.

The point is, baseball is a whole lot less fun when players like Pujols — and this is not to excuse his co-conspirators — do what they did on Thursday night. The media can still write their stories about what transpired on the field, but they do so from a less-informed standpoint ("Inquiring minds want to know what happened on that key play, Albert..."). Inevitably, a certain part of the coverage now is about the less interesting "inside baseball" that has nothing to do with ball and bat ("Inquiring minds want to know why you should be exempt from answering questions about that play while Jon Jay, who makes about one-fortieth of your salary, is capable of doing so...").

This particular column may be guilty of falling into the latter camp, but I offer my perspective as somebody who has spent 10 years on the outside, covering the game largely without the access guaranteed by a media credential, and occasionally critiquing the work of those with one in less than glowing terms. Having completed a season with a BBWAA credential, I've now seen how the other half lives. My particular style of writing doesn't depend upon firsthand quotes, but occasionally I've found them useful for coloring my story. When I've needed answers from players or a manager, I've gotten them — not always to the level of detail I'd prefer, but at least providing more information than I had previously. Having peaked inside the sausage factory, I have a better understanding of how hard it can be to tease out interesting material amid the dull but demanding day-to-day grind of beat reporting. I know how frustrating it can be when a player doesn't cooperate with the media, and how that's still a much more rare occurrence in the Yankee clubhouse than it is in most places.

Ultimately, this mess probably won't cost Pujols money, either in the form of a fine or dollars on his next free agent deal, though it has been suggested that manager Tony La Russa's protection of his superstar is one reason why he'll remain in St. Louis. Nonetheless, his credibility has taken a hit, one that won't be so easily repaired. If Mariano Rivera can answer questions about blowing the save in Game Seven of the 2001 World Series, Albert Pujols can answer questions about a botched relay. The culture of the 21st century Yankees, from Jeter, Rivera, Cashman and Torre (or Joe Girardi) on down, wouldn't have allowed such a sideshow to go on last night. Thank your lucky stars for that.