C.J. in the Spotlight

Share All sharing options for: C.J. in the Spotlight

The World Series kicks off tonight, and as with last year, the Yankees will be keeping a particularly close eye on the lefthander starting for the Rangers because he's a pending free agent this winter. C.J. Wilson doesn't get the acclaim that Cliff Lee did, nor will he command a top-of-the-market contract, but which 2010-2011 stat line belongs to which southpaw? 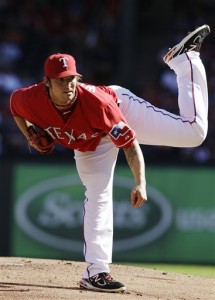 Pending free agent C.J. Wilson will have a lot of teams eying him as he takes the hill in Game One of the World Series.(AP)

I threw a third lefty in there just to muddy the waters a bit. From a raw-stat standpoint, Pitcher A is the most impressive thanks to his lower ERA and outstanding control, though once you park-adjust, some of that comes out in the wash. Factor in defensive support, and pitcher C, with the lowest strikeout rate and BABIP, falls behind a bit in value, but he does do a better job of keeping the ball in the park, an important consideration in terms of his next destination. All of these are very good pitchers.

In case the walk rate wasn't a giveaway, Pitcher A is Lee, Pitcher C is Wilson, and Pitcher B is CC Sabathia, who as we have learned over the past week may be pursued by the Rangers if he does exercise his opt-out clause (though there are now conflicting reports on Texas' interest).

Wilson, though not the same kind of inning-eating horse as the two former Cy Young winners, is nonetheless a guy who doesn't look entirely ridiculous in such comparisons. He has a virtue over Lee in that he is more of a groundballer, something which has helped him survive in hitter-friendly Texas and will suit him well at his next address, if indeed he decides to leave. He won't command anywhere near the $23-25 million those two aces draw; his next contract will likely look more like the five-year, $82.5 million deals signed by those toxic twins, A.J. Burnett and John Lackey, particularly if either the Yankees or Red Sox get involved in the bidding.

Wilson has not had a spectacular postseason; in fact, he has been rocked for 14 runs and six homers in 15.2 innings over the course of his three starts, none of them quality. He has run up high pitch counts by going deep into counts, walking eight hitters and striking out 17. ESPN's Buster Olney made a left field estimate — unsubstantiated by any amount of work (stats have never been Olney's strong suit) — that his struggles would cost him $25-30 million on the open market, but that seems a stretch, since it's unlikely Wilson is going to break out of the $15-$20 million per year tier ("Burnett money") into the $20-25 million one ("Sabathia money"). Per Brian Cashman's statements, the Yankees, as we know, aren't prone to basing their decisions on postseason samples, and in any event, it's worth noting that last October, Wilson delivered three quality starts out of four, including 6.1 innings of shutout ball in the Division Series against the Rays, and came home with a 3.70 ERA despite a worse strikeout-to-walk ratio. While we're at it, note that Lee was hit hard in his one postseason start this year and has laid two eggs in his last three postseason turns, and Sabathia, of course, has been a disappointment in each of his last two Octobers, with a 5.84 ERA in five starts and one relief appearance. It happens.

What Wilson has going for him that Burnett and Lackey didn't is less mileage on his arm, and a stronger recent track record with regards to health. Going on 31 years old, he has spent just two seasons in the rotation after working as a reliever for the first five years of his big league career (including a stint as closer from 2007-2009), and has tossed all of 708 innings in the majors. He had Tommy John surgery in 2004, back when he was in the minors, but hasn't had serious arm trouble since having bone chips removed in 2008. Burnett was 32 when he signed with the Yankees, with 1,376 major league innings, a Tommy John surgery, and other elbow issues as well; he had totaled just 301 innings in 2006 and 2007. Lackey was 31 when he signed with Boston and had 1,501 major league innings under his belt, but just 340 over the previous two seasons due to triceps and elbow woes which DLed him for around 15 weeks between the two seasons.

Before you go running to jump out the nearest window because of the C.J./A.J. comparisons, remember that there are essential differences between Wilson and his predecessors; he's lefthanded and less velocity-dependent (from the Baseball Prospectus World Series preview: "Wilson has a deep arsenal, with fastball variations representing two-thirds of the pitches he throws. He's not overpowering at 89-93 mph, but his success comes from location and the ability to sink and cut…") and may even wind up being less expensive given his shorter resume as a starter. He does look like a stronger option than any of the second-tier free agents whom the Yankees bypassed last winter (Jorge de la Rosa, Hiroki Kuroda, Jake Westbrook, and Jon Garland — note that two of those guys missed more than half the season due to serious injuries), and may be the belle of the ball assuming the Yankees do retain Sabathia.

There's a lot to like about Wilson — he's a cerebral guy who is almost certainly more thoughtful than the average ballplayer, not to mention a guy who can strike out 200 hitters a year while getting a ton of groundballs — and as with any free agent option, a fair bit to be wary of as well. How badly the Yankees need him is a matter for debate, one that will come into more focus once the team addresses Sabathia's next move, and of course, the California native will have his say about whether he does want to leave Texas, and if so, whether he wants to head east. For now, he's worth watching as the World Series opens in St. Louis.