Making The Last Out

Share All sharing options for: Making The Last Out 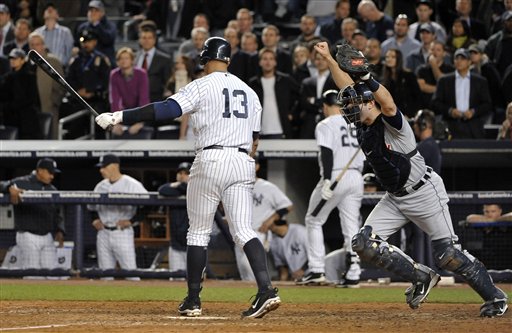 Alex Rodriguez tied a Yankee record by making the last out of their last two postseasons. (AP)

As a kid I was fascinated with the final out of a ballgame. I think it stemmed from Little League and the awkward feeling of making the last out myself, of being my team's last hope and of letting everyone down despite the fact that my Little League at-bats generally had just two possible outcomes, a walk or an out, with the latter being far more common. (Saber-friendly before I knew what on-base percentage was, my approach at the plate was based on the idea that nine-year-olds can't throw three strikes before they throw four balls; I once got a game ball from my old-school coaches simply for swinging the bat during a game.) I remember that Gary Carter made the last out of the first baseball game I saw in person*, and later became fascinated with who made the last out of each year's World Series (Marty Barrett!), which was the ne plus ultra of last outs (not that "ne plus ultra" was in my vocabulary at the time).

Adding to the mythic nature of the last out is the anecdote from Game 6 of the 1986 World Series in which, as the Mets strung together three straight singles while trailing with two outs in the bottom of the tenth inning and the Red Sox one out away from their first World Championship since 1918, each successive batter to reach first base told first-base coach Bill Robinson "there was no way I was going to make the last out."

This year, a lot was made of the fact that Alex Rodriguez and Ryan Howard each made the last out of their team's seasons for the second year in a row, and three day's before Rodriguez's last out, Steve posted this in reaction to Derek Jeter striking out with the tying and winning runs on base in Game 3 of the Division Series.

That last reminded me of something I've meant to research for a few seasons now, which is that it has seemed to me a couple of seasons ago that Derek Jeter makes a large number of the Yankees' final outs. Thankfully, with the help of Baseball-Reference's Play Index, I can find out exactly how many and how often.

What I'm looking at here is what I'll call "last-out situations." That is, plate appearances made with two outs in the ninth inning or later when the hitter's team is trailing. Any out in those situations ends the game.

To provide some context, here are the performances of Jeter, Rodriguez, and Howard in last-out situations during the regular season in their careers (note that I'm only counting two-out plate appearances here, not counting game-ending double plays as those aren't situations in which a hitter has to reach base or the game will end):

Getting back to Jeter, he came up in a last-out situation seven times during the 2011 regular season and reached base just once (a single off Jonathan Papelbon on May 13*). Last year, by most measures his worst major league season, he came up in a last-situation nine times and reached base seven times (three times on a double), proof that these small samples tell us nothing about overall player performance.

*Fun Fact: Over the past four seasons, Jeter has faced Papelbon four times while representing the Yankees' last out and has reached base all four times.

Was there ever a period when Jeter seemed to make an inordinate number of the Yankees last outs? Well, he came up in those situations a dozen times in both 2004 and 2005 and reached base just three times in those 24 plate appearances. If there was ever a period when I would have been justified thinking Jeter made an excess of last outs, that would be it, as Jeter's 21 last outs did indeed lead the Yankees over those two seasons. In fact, the only Yankee to even come to the plate in a last-out situation more than 21 times over those two seasons was Bernie Williams, and while Bernie went 0-for-5 in those situations in 2004, he reached base in ten of 17 such plate appearances in 2005 on two singles, a double, five walks, and two home runs. Ruben Sierra came to the plate in 14 last-out situations in 2004, but he, too, excelled, reaching base six times on a walk, three singles, a double, and a bases-loaded triple (!) off the Royals' Chris George.

So there have indeed been stretches, unrelated to his recent decline, when Derek Jeter has been the most common last out in the Yankee lineup, though surely his place atop the batting order, be it in the first or second spot, helped put him in those situations.

What about in the postseason? Well, if we go all the way back to 1921, Jeter and Rodriguez don't feature too prominently. Including the final outs of the last two Yankee postseasons, Rodriguez has come up in just four last-out situations in the postseason as a Yankee, though he's 0-for-3 in those situations, the exception being when the Angels had Brian Fuentes intentionally walk him when leading by a run with the bases empty in Game 5 of the 2009 ALCS. Fuentes then unintentionally walked Hideki Matsui and hit Robinson Cano with a pitch only to get Nick Swisher to pop out to end that game. Jeter has come up in last-out situations three times in the postseason, including Game 3 of this year's ALDS, and is 0-for-3 in those situations.

The Yankee to bat in the most last-out situations in Yankee postseason history is Jorge Posada, who has done so eight times. Posada is 2-for-8 in those situations with a single and a home run (the latter a meaningless two-run shot off Tigers lefty Jamie Walker while trailing 8-1 in Game 4 of the 2006 ALDS). Posada's six final outs are the Yankee postseason record. Only Mickey Mantle and, believe it or not, Ruben Sierra, have even come to the plate in as many as six postseason last-out situations for the Yankees, but neither went 0-for-6. In fact, Sierra made that last out just three times, while Mantle made it four times.

*That includes double-plays of which there has only been one to end the Yankees' postseason, that coming off the bat of Frank "Home Run" Baker on the final play of the 1921 World Series.