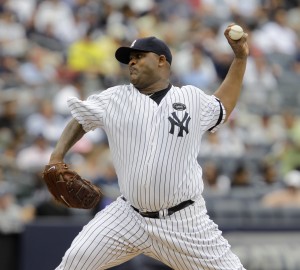 Yesterday, a very fine day for baseball if you like that kind of thing without the Yankees in it, Wallace Matthews of ESPN reported that the Texas Rangers plan to "throw a boatload of money" at CC Sabathia should he opt out of his contract. If this is indeed true, the Yankees should hitch up their pants, tighten their belts... and let the big man go.

Sabathia is one of the best pitchers in baseball and is also the only reliable starter the Yankees have, one of the reasons that the players are at home darning their socks instead of playing against the Rangers in the ALCS. He is also 31 years old, extremely heavy, and has thrown a tremendous number of innings in his career. Over the last 30 years, the pitchers with the most innings through their age-30 season:

Odd that four of the ten wound up on the Yankees at some point. You can look up their careers yourself, but I think it's fair to say that six of the ten burned out early and/or missed long stretches due to arm injuries. Witt had his last good season at 26. Saberhagen spent every other year on the DL. Stieb was no fun anymore after 32. Gooden wasn't the same guy at 26. Fernando threw 20 complete games at 25 and spent the next 10 years as just a guy.

Now, Sabathia has been pretty darned durable, and maybe you can make an argument that he's already sailed past the point that most of these guys broke, and therefore should be considered a safe bet. You might be right, but how many years, how many dollars do you want to bet on that, particularly if it requires the club to be carrying him until he's the way Alex Rodriguez seems to be now? How many good years does Sabathia have left? If the answer is five, are you willing to pay him for ten?

All I know for certain is that when you start assuming a player isn't going to get hurt, that's when he gets hurt.

Complicating this decision is the fact that Brian Cashman and Joe Girardi have not done a good job of cultivating alternatives. The odds are approximately a million to one that there is another Sabathia on the farm; no one expects that. However, at the moment, they have zero rotation depth--I'm sorry, but Ivan Nova is not yet a proven commodity, not with that 5.3 strikeouts per nine innings staring us in the face. They let A.J. Burnett's contract dictate how they handled him, threw starts at Brian Gordon, left Hector Noesi in the pen until the end of the season, left everyone else on the farm period, and gave 55 starts to Freddy Garcia and Bartolo Colon, and guess what: I don't care what they did with them. They were, inevitably, one-offs, no encores, and would leave the team searching for replacements whether they won two games or 20. Stuffing one sore-armed vet into the rotation is insurance. Going with two represented short-sightedness, especially in light of Sabathia's ability to opt out.

Despite this, there is no reason for the Yankees to be held hostage to Sabathia's demands or Texas tactics that drive up his price. If Nolan Ryan wants to give the big man $25 million a year until he's 40, he should be allowed to do so. It might hurt in the short term, but in the future the Yankees will be a slimmer, more flexible team for the decision.

Update: Responding to one item in the comments that I should have made clearer in the foregoing: letting CC go might mean a rebuilding year given the lack of other established pitching. However, that might be inevitable anyway, because CC by himself isn't enough. The good news is that if there is to be a rebuilding year, 2012 is the perfect year for it: the Red Sox have massive problems of their own, particularly with pitching, the Rays are not going to expand payroll, and the Blue Jays and Orioles still aren't coming. It's possible the Yankees could do what they did in the 1950s--rebuild and win at the same time.