How Risky Is CC Sabathia?

Share All sharing options for: How Risky Is CC Sabathia?

If there's one thing you can be certain of this offseason, it is this - CC Sabathia will opt out of the remaining 4 years on his contract, giving up $96 million of guaranteed money in hopes of a new deal that's similar to the 7 year, $161 million deal he got from the Yankees prior to the 2009 season.   This is how player opt-out clauses work, and he'll most likely get his money.

This is different than what the Yankees went through with A-Rod, both because CC is a bit younger and because even the rosiest outlook for Sabathia has him earning about $100 million less than A-Rod's current deal.   Assuming that Cliff Lee's contract will be the starting point in negotiations, the real question is how much of a risk this will pose for whichever team signs him, most likely the Yankees.

Sabathia just completed his age-30 season with 2,364.3 innings, 49.2 WAR, and a career ERA+ of 125 under his belt.  We can look at other pitchers with similar accomplishments up to age 30 and see how they fared in the years following.  First, here is the list of all post-WWII pitchers who accumalated 2,000 innings, 40 WAR, and a 115 ERA+ through their age-30 seasons: 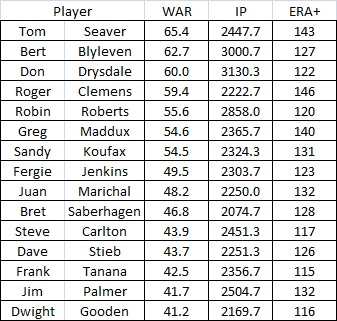 Obviously, it takes a lot to put up these kind of numbers - efficiency, durability, and health.  Age has a tendency to wear on those things, but some handle it better than others.  Here is the same group from age 31-38: 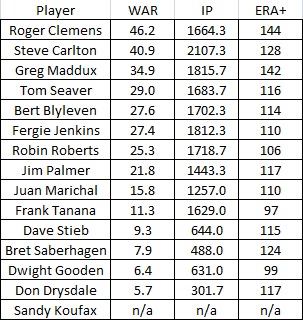 (thanks to Play Index at www.baseball-reference.com)

In fairness, we're not comparing apples to apples.  Despite their elite numbers, many of these pitchers had already shown signs of trouble prior to 30.  Frank Tanana transitioned from elite starter to innings eater somewhere around age 24.  Dave Stieb was still relatively effective, but no longer a 280 IP workhorse.  Saberhagen and Gooden both struggled with injuries, and in Gooden's case, legal troubles as well.  Sandy Koufax retired.  Since Sabathia has remained consistently healthy, and is coming off of arguably the best season of his career, it doesn't make sense to compare him to these pitchers.

Everybody left on the list made the Hall of Fame, and although some were clearly better in their 30s, there doesn't appear to be a trend.  It's difficult to say what separates Juan Marichal and Don Drysdale from the rest - it certainly wasn't high pitch counts or 300 inning seasons.  Assuming that Sabathia's new contract takes him to age 37 or 38, those two make me worry a bit.

We don't know what the future holds for Sabathia, or how his 6"7' frame will hold up as time goes on.  We do know that he's got a rare combination of skills which allowed him to get this far, and he's also coming off of one of the best seasons by a 30 year old pitcher in the past 65 years.  That all bodes well for the future.  As you can see, most pitchers who have been in his current position went on to become all-time greats, and Sabathia's got a real chance of becoming an inner-circle Hall of Famer by the time he hangs up his spikes.

If I were Brian Cashman, I would grit my teeth, do what it takes to re-sign him, and know that the odds are probably in my favor.