Running Through the Options

Share All sharing options for: Running Through the Options 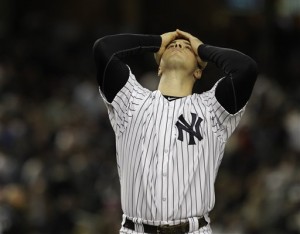 His postseason was a disappointment, but picking up Nick Swisher's 2012 option should be a relatively easy call. (AP)

As the Yankees begin going about their offseason plan, the first order of business is retaining Brian Cashman. Once that's done — and it's expected to happen fairly quickly, though contrary to initial reports, the two sides have not talked about it yet — the team has four players for whom contract options loom: CC Sabathia, Rafael Soriano, Robinson Cano, and Nick Swisher. Here's a quick rundown of each situation:

• Sabathia holds a player option, which he can exercise to forgo the remaining four years and $92 million dollars on his current deal. He's expected either to exercise it and become a free agent or to use the threat of doing so — and perhaps defecting to the Red Sox or going home to California — as leverage to work out a longer-term extension. Supposedly, he he loves living in the New York area (he and his family live in Bergen County, New Jersey), which increases the likelihood of his remaining a Yankee. But no matter how the situation unfolds, it will serve as a reminder of the gap between the staff ace and the rest of the rotation, as well as the one that got away, Cliff Lee, since there's no equivalent free agent on the market this winter.

You can argue that Sabathia needs to do a better job of staying in shape to mitigate the wear and tear on his big body as he throws more than 230 innings per season, and you can point out that he has produced a 5.84 ERA (and a 4.90 FIP, with a scorching .418 BABIP) over the last two postseasons while failing to reach the seventh inning in any of his five starts (one shortened by rain). But with no easy off-the-rack solution this winter, the Yankees would likely have to trade multiple blue-chip prospects — Jesus Montero and perhaps Manny Banuelos or Dellin Betances — in order to replace him, and no, neither Felix Hernandez nor Clayton Kershaw are available.

• Soriano holds an $11 million player option for 2012, which he is almost certainly going to exercise. The 31-year-old righty had a rough introduction to the Bronx when it came to performance and accountability. Elbow inflammation cost him two and a half months and limited him to just 39.1 innings, but he did pitch considerably better after returning (3.33 ERA, 26/7 K/BB in 24.1 innings) than before (5.40 ERA, 10/11 K/BB in 15 innings), and showed flashes of dominance in his three postseason appearances, though the solo homer he surrendered in Game Three against the Tigers would prove decisive.

While there are closer vacancies to be had beyond the Bronx — Boston's Jonathan Papelbon, Philadelphia's Ryan Madson, and Minnesota's Joe Nathan and Matt Caps are free agents, for example, while the Mets have already traded Francisco Rodriguez — Soriano's abbreviated season makes improving upon his current deal unlikely. If healthy, he should be an asset, albeit an expensive one.

• The Yankees hold a $14 million club option on Cano for 2012. Coming off a career-best 6.5 WARP at age 28, the only challenge is in how quickly the Yankees can exercise it, because at that price, he's a bargain (roughly, figure each win above replacement is worth $5 million a year). There's absolutely no threat that they won't, and in fact they also hold a $15 million option on his services for 2013, for which they have another year to decide. It's possible the Yankees and Cano could parlay those two years into a longer-term extension, but there's no rush, particularly given the inflexibilities produced by the contracts of Mark Teixeira, Derek Jeter, Alex Rodriguez, Mariano Rivera, and A.J. Burnett.

Furthermore, during his three seasons in the Bronx, Swisher has averaged 4.1 WARP and 27 homers per year while hitting .267/.368/.486. Yes, he has backed that with a dismal .160/.257/.330 showing in his three postseasons, but that's still a sample size issue, 114 plate appearances of subpar play (albeit with the occasional big hit) versus 1877 of star-caliber performance. During his time in pinstripes, only Jose Bautista, Jayson Werth and Nelson Cruz have been more valuable among right fielders, the latter two by 1.0 and 0.4 WARP, respectively, and only Bautista and Shin-Soo Choo have produced True Averages higher than his .297 (Cruz is virtually tied at .297 as well). In other words, he's been an elite right fielder at a non-elite price. It's not as though the Yankees have any full-time outfielders at the ready in their minor league system, nor have they seriously entertained an outside-the-box notion such as teaching Montero the right field ropes. Why drop such a productive player only to sign the less productive likes of Michael Cuddyer, Jason Kubel, David DeJesus, Ryan Ludwick or (shudder) J.D. Drew?

It doesn't sound as though the Yankees are likely to do that. The Star-Ledger's Marc Carig quotes Cashman as saying that he doesn't let a player's postseason performance influence his thinking on whether to remain a player: "I don't make decisions on postseason samples because no one's going to have a large enough postseason sample to be meaningful," he said. "Just because somebody has an exceptional series doesn't all of a sudden change the evaluation of the player." Somewhere, 2009 postseason heroes Hideki Matsui and Johnny Damon are nodding in agreement.

Because he's relatively affordable, picking up Swisher's contact has the additional virtue of providing the team with an additional trade chip, one that they could possibly use in pursuit of rotation help. No, he's not going to fetch an ace, and yes, trading him would create a hole that would then require filling, but the point is that exercising the option provides flexibility as the Yankees head into the winter. Expect Cashman to do so almost as soon as the ink is dry on his own deal.