The Hard Facts of Autumn

Share All sharing options for: The Hard Facts of Autumn 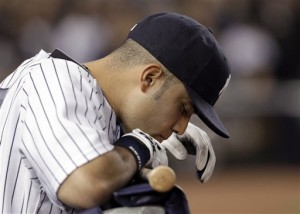 The Yankees fell short of a championship in 2011, but they provided some pretty great times even as they did. (AP)

"You may glory in a team triumphant... But you fall in love with a team in defeat," wrote Roger Kahn in the seminal The Boys of Summer. Of course, Kahn was discussing those perennial underdogs, the Brooklyn Dodgers, who valiantly battled the Yankees time and again in October but kept coming up short.

The 2011 Yankees, with their payroll in excess of $200 million and flaws visible from a mile away, were tougher to love. From their shortage of frontline starting pitching once Cliff Lee chose Philadelphia to the visible declines of their aged veterans to their wariness of trusting the products of their own player development system, they did a whole lot that made us tear out our hair, cover our eyes, or throw objects at the television. Yet they won 97 games and the AL East flag with a juggernaut offense, a rotation that was surprisingly good for all of its haphazard construction, and a bullpen that more often than not was pretty great.

Curtis Granderson had an MVP caliber season, putting his career-long woes against lefties behind him. Robinson Cano generated a bit of MVP heat himself. CC Sabathia put up arguably his best regular season performance in pinstripes. Ivan Nova emerged as a credible mid-rotation starter, if not the true number two he was cast as in the playoffs. Derek Jeter and Mariano Rivera attained career-capping milestones, and at times — more often in the latter case than the former, admittedly — summoned amazing facsimiles of their prime selves. Jorge Posada found redemption after struggling to accept his new lot. Jesus Montero looked every bit like the mid-lineup threat we've been promised. Russell Martin rose off the scrapheap and showed some life with his bat and even more with his abilities behind the plate. Bartolo Colon and Freddy Garcia enjoyed unlikely revivals. David Robertson blew hitters away and played Houdini again and again. Even Francisco Cervelli had his moment in the sun.

The Yankees gave us six months that contained far more joy than disappointment, that brought us together for laughs and cheers and arguments and beers, plus the occasional goosebump moment, and even a wee taste of schadenfreude. Alas, in the crapshoot that is the postseason, they got wet, suffered due to the flaws of which we were already aware, and fell a couple of runs short over a five-game series against a 95-win team that played some pretty good baseball themselves, reminding us that we are not guaranteed that seventh month of joy. More often than not, we are forced to face what Ken Burns termed "the hard facts of autumn."

In the grand scheme of things, the last six months mattered far more than the past week, simply because of the way they bonded us together via the rhythms and rituals of the baseball season. To deny otherwise is to take on the sense of entitlement that gives Yankee fandom a bad name in some quarters. One can only cringe at the breathless, silly desperation of the suggestions being offered to beat writers and talk radio shouters demanding that Nick Swisher and Mark Teixeira and Alex Rodriguez be drawn, quartered, blindfolded, shot, burned at the stake, sent to bed without supper, and traded to the Ulan Bator Yak Milkers of the Outer Mongolian Independent League, roughly in that order, while Albert Pujols and Reggie Jackson are summoned to the Bronx.

Which isn't to say that the Yankees don't have much to do this winter; they're the ones for whom the hard facts of autumn have real consequences. In all likelihood, Brian Cashman will be retained, charged with the challenge of working around the inflexibilities he and those above him have been party to creating by assembling a squad that can surpass this year's bunch, one that finds ways to transfuse some young blood into this aging squad. There will be a time and a place to debate what must be done. In the meantime, congratulations to those pesky Tigers on beating the Yankees (my coverage of the series finale is here, for those who can stomach a rational take on the defeat). Congratulations on the same scale aren't in order for the Yankees, but we do owe them thanks for a whole load of good times.

As do I to you, dear readers, for following along in this space all season long, and for the year-and-change since I came aboard here. Win or lose, it's been a pleasure to cover this team in this space for this audience, whether you've been kickin' it old school with Steve since the Pinstriped Bible was his shingle alone, joined the party since Cliff and I climbed aboard, or followed us here from our other writing gigs. It's been an even greater pleasure to work with two smart baseball minds and dear friends in Steve and Cliff. Thanks to all of you for a great season!