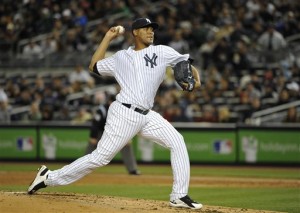 Ivan Nova's midseason reinvention helped him emerge as the Yankees' second-best starter in the second half, and the man to whom they'll turn in Game Five of the Division Series against the Tigers. (AP)

When Ivan Nova was sent down to Scranton/Wilkes-Barre in early July, it wasn't because he had pitched badly for the Yankees. Rather, he was caught in a numbers game; Bartolo Colon came off the disabled list and started the next day, while Phil Hughes rejoined the team and started four days later. The 24-year-old righty had a minor league option, and the Yankees took advantage of that, stashing a player good enough to start for nearly any of the 30 teams while they tried to milk innings out of their surprising reclamation projects.

Nova spent a month in Triple-A, making three starts but suffering a minor ankle injury. It would have been easy for him to become discouraged at being exiled, but by all accounts he used his time on the farm well, and when he returned, he was a different pitcher. Take a look at his splits:

Nova outpitched his peripherals in both stints thanks to a .291 BABIP before going to Scranton and a .275 mark after; overall, his .284 mark was the lowest among the team's starters, 16 points lower than the team-wide .300 average. His strikeout-to-walk ratio improved markedly upon returning, from 1.4 to 2.4, and his home run rate did as well despite an uptick in his flyball rate — a bit of help from the baseball gods, perhaps. As a result, he ate a full extra inning per start, upping his average from a wobbly 5.7 to 6.7.

The underlying key to Nova's emergence was an uptick in his swing-and-miss rate, from 5.3 percent to 8.7 percent. That 5.3 percent would have ranked in a virtual tie with Colon for the majors' second-lowest rate among ERA qualifiers; Colon, however, led the majors in his ability to get strikes looking. The higher 8.7 rate was in the neighborhood of what front-rotation types like Jon Lester, Tim Hudson, Ian Kennedy and Felix Hernandez managed over an entire season — a much more workable rate, to say the least, if not a Sabthia-esque one (11.2 percent). The increase was accompanied by a slight uptick in his looking strike rate, from 18 to 20 percent.

Nova increased his swing-and-miss rate thanks an upgrade in his arsenal. He added a slider, decreasing his reliance upon his four-seam fastball and curveball. The ability to mix in an extra pitch that he could throw for strikes helped his swing-and-miss rates increase across multiple pitches. From the PitchF/X data at the essential TexasLeaguers.com:

In case the abbreviations aren't obvious, those are for changeup, curveball, cutter, four-seam fastball, two-seam fastball, and slider. The last column is how many extra swings and misses he got per 100 pitch-game via his upgraded arsenal, a whopping total of 4.3 — roughly one for every six hitters he faced. That may not seem like much, but it's a pretty big boost.

While he certainly owes some of his results to his defense, that improvement — which translated not only into more strikeouts but into better counts against hitters — is what made Nova the Yankees' second-most reliable starter in the second half. It's why for all of the ups and downs of Colon, A.J. Burnett, Freddy Garcia and Phil Hughes, Joe Girardi had few qualms about penciling the rookie as his number two starter in the Division Series, positioned to face the Tigers both in Game Two and Game Five. Rain required some adjustment on the fly, but Nova acquitted himself well in picking up from Sabathia in the resumption of Game One on Saturday, throwing six scoreless innings of two-hit ball before running out of gas in the ninth. He did issue four walks to go with four hits, and needed the help of his defense to nail a runner at the plate, but he was as cool a customer as the Yanks could have hoped for under the circumstances.

With the Yankees' season on the line, he takes the hill in the Bronx, squaring off once again against Doug Fister, a pitcher who underwent a bit of in-season reinvention himself. While there's no guarantee he's going to be Super Nova tonight, he's come a long way from where he began the season; he's no green rookie anymore. With a strong offense and a rested bullpen to support him — even Sabathia if necessary — here's hoping he'll propel the Yankees into an AL Championship Series rematch against the Rangers.

As he's been doing all postseason, our boy Cliff has his preview up at SI.com, a hail of bullet points regarding some Division Series history as well as stats relevant to the two teams. Here's one:

In recent days I've been citing the fact that in best-of-five series that started out tied 1-1, the winner of Game 3 has claimed 29 of 37 series (including this year's Rays-Rangers ALDS). However, in the 16 of those series to go to a fifth game, the winner of Game 3 has lost as often as it has won, going 8-8. Which means the Yankees tonight and Cardinals tomorrow are out from under the thumb of history.

In case you're wondering, of the 64 Division Series prior to this year's slate, the team with home-field advantage has won just 33 times, and home teams are 6-8 in Game Fives. So the Yankees will have to buck some history to advance.