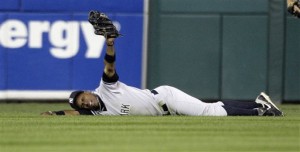 It was indeed Grand! (AP)

At Baseball Prospectus, I wrote about A.J. Burnett's wobbly but ultimately redemptive performance. To me, one of the big keys to his night was his handling of Miguel Cabrera and Victor Martinez; only once did he face them with the lead in danger, in his messy first inning.

After leadoff hitter Austin Jackson (who had walked) stole second, Burnett (on the orders of Joe Girardi) issued an intentional walk, and then he walked Martinez to load the bases. That got the bullpen going and eyes rolling, but number six hitter Don Kelly isn't nearly the caliber of hitter as those two (he batted .245/.291/.381 for the season, and had no business being that high in the lineup). While he certainly put a scare into the Yankees with his drive to center, Curtis Granderson's spectacular catch got Burnett off the hook.

In the third, Burnett got Cabrera to ground out to shortstop with two outs and Delmon Young (who had unbelievably enough just walked) at first. Martinez led off the fourth with a home run, but by then the Yankees had a two-run lead, and there was of course nobody on base; breaking the two up certainly made life easier. In the sixth, Cabrera lined out to Jeter to lead off the inning, and Martinez grounded out meekly to the shortstop as well. By the next time Cabrera came up, Phil Hughes was in and the score was 10-1; he made an out to end the eighth, and Martinez retired Boone Logan in the ninth.

One-for-four with two walks and a homer in six plate appearances sounds as though it could do a fair bit of damage, but the Tigers collected just three other hits (one for extra bases) and two other walks. Sequencing-wise, it worked out particularly well for the Yankees, since after the first inning, the Tigers had just one runner on base when the duo batted against Burnett.

• Granderson's two plays: wow and wower. In the first-inning one, he broke the wrong way to start out with, requiring him to make up ground. In the sixth, well, that's a catch you'll see on the highlight reels for years to come. The first one was probably the more important, as Kelly is fast enough to turn that into an inside-the-park grand slam, but the second one was prettier and required more bodily sacrifice.

We've spent a fair bit of time here discussing Granderson's unfavorable defensive metrics as his MVP candidacy has come into focus. The neighborhood effect of having the outstanding Brett Gardner play next to him no doubt eats into Granderson's chances in a way that none of the major defensive systems accounts for, but the center fielder's shallow positioning costs him as well, since he's better able to snag singles but loses out on preventing some doubles and even triples.

One season of data isn't enough to accurately measure defense according to those who know what the hell they're talking about, but while Granderson graded out well above average according to the major metrics prior to this year, his 2011 numbers are alarmingly unflattering. Baseball Prospectus' Fielding Runs Above Average rated him at −13.1 runs, 22nd of 23 center fielders with at least 400 plate appearances (only Melky Cabrera, at −17.9 runs, was worse). According to Ultimate Zone rating, he was 5.1 runs below average, 12th out of 20 (I'm not sure what the playing time threshold for that leaderboard was), but 20th in Plus/Minus' Defensive Runs Saved at −15. Baseball-Reference's Total Zone puts him at −2 runs. That's a whole lot of disagreement, but it averages out to around nine runs in the red.

That's not how the Yankees see it, however. According to Fox Sports' Ken Rosenthal, their in-house system likes his work. "We have him as an above-average defensive outfielder," said Brian Cashman. "Our numbers don’t match some of that stuff. He comes out high on our defensive measurements."

The Yankees aren't necessarily wrong. They have access to a higher grade of information than the general public, likely including HitF/X and/or Trackman batted ball data and (FieldF/X hasn't made it all the way around yet), and as Rosenthal wrote in his must-read piece on the aftermath of Moneyball (the book), the Yanks have become one of the more aggressive teams when it comes to the stat side, employing over 20 people working in that department.

• Through four games, the Tigers have gotten the benefit of the stronger starting pitching:

The bullpen edge, however, has been all Yankees, even with David Robertson yet to get into a game, and Mariano Rivera confined to three pitches:

Of course, those numbers are somewhat skewed by classifying Doug Fister and Ivan Nova as relievers. If we include them as starters, the Yankees have the results-wise edge in that department (4.01 ERA to 5.26) but the Tigers have the edge process-wise (2.77 FIP to 4.78), with New York winning the battle both ways in the bullpen department (1.74 ERA and 2.81 FIP versus 10.61 ERA and 6.74 FIP). All three of the Yankees' home runs have come against Detroit's three top relievers, Al Alburquerque, Joaquin Benoit and Jose Valverde, while three of Detroit's four homers have come against the Yankee starters.

• Both teams have gotten their licks in against lefty pitching, though Detroit's had twice as many opportunities, and the Yankees' chances have been confined to relatively low-leverage situations in the late innings against Phil Coke and Daniel Schlereth:

The Yankees have enjoyed a clear advantage against righty pitching, however, particularly via a 12-4 advantage in extra base hits:

We'll see if the Yankees can parlay that advantage into advancement. Certainly, they have to feel good about Nova starting Game Five, just as they initially drew it up, while for the Tigers, Fister is a step down from their initial plan of throwing Justin Verlander. Still, the latter pitched better in Game 1B than his line might have indicated due to reliever Al Alburquerque surrendering a grand slam to Robinson Cano, and he did a fine job for the Tigers down the stretch. The Yankees may be home, but they're hardly home free.