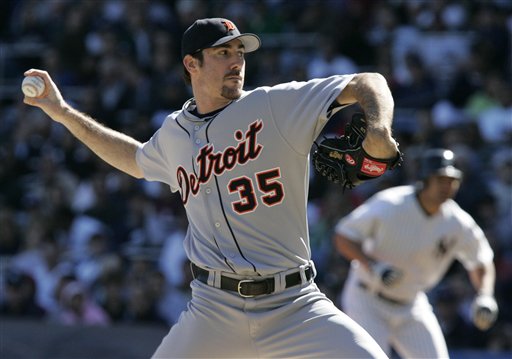 Justin Verlander is just one of many things the 2006 ALDS had in common with this year's. (AP)

That last is just one of the many ways that this year's Division Series has come to resemble the Yankees 2006 loss to the Tigers, all of which are coincidental, but none of which are particularly reassuring for Yankee fans. It's easy to see the similarities in Game 1, which saw the Yankees score a bunch of runs (eight in '06, nine this year) to win behind a compelling, young, second year pitcher with an underwhelming strikeout rate (Chien-Ming Wang then, Ivan Nova now), with an MVP-candidate middle infielder (Derek Jeter then, Robinson Cano now) having a big night (Cano's eight total bases in this year's Game 1 was the most by a Yankee in a postseason Game since Jeter's ten in Game 1 in '06). Both series saw the first two games take three days to play because of rain and Game 2 in New York and Game 3 in Detroit played on consecutive days because of the rescheduling caused by that rain.

Game 3 in 2006 saw the Yankees throw an oversized future Hall of Famer and their ostensible ace (Randy Johnson) only to lose 6-o to Kenny Rogers. Game 4 saw Joe Torre drop Alex Rodriguez to eighth in the order only to see Jeremy Bonderman throw five hitless innings against them to start the game (a no-hitter broken up by Robinson Cano) and the Yankees get eliminated in an 8-3 loss.

There are a lot of bad memories there, memories which it seems were stirred when the new Yankee Stadium crowd, utterly unfairly, began to boo Rodriguez late in Game 2. The Yankees hope to exorcise those ghosts starting tonight, with CC Sabathia taking on Justin Verlander in the crucial Game 3. You can read my preview of the game on SI.com.