Share All sharing options for: Girardi's Darkest Hour as Manager 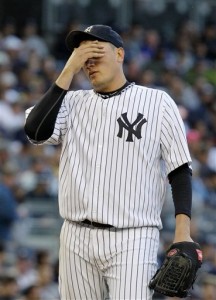 Was Freddy Garcia offering a preemptive facepalm in response to the moves Joe Girardi would make following his departure? (AP)

Well, I was wrong about Max Scherzer, who kept the ball in the park and kept the Yankees hitless for five and a third innings on Sunday. Freddy Garcia didn't pitch too badly either save for one mistake to Miguel Cabrera, and who knows how the sixth inning would have unfolded had it not been for Derek Jeter's throwing error. In my coverage for Baseball Prospectus I seized upon two glaring mistakes by Joe Girardi, both of which stemmed from a sense of desperation borne of a belief that the Yankees lacked the tools to come back from a 4-0 deficit over the final three innings, namely the decisions to pinch-hit for Brett Gardner with Eric Chavez and to use Luis Ayala to pitch the ninth. The more I think about it, the more I feel as though these were Girardi's equivalent of Joe Torre's decision to call upon Jeff Weaver to pitch relief, a grave, series-turning error that represented the manager's darkest hour in pinstripes, at least as a tactician.

In each case, Girardi bypassed better available players to do what was needed. Calling upon Chavez, who has five home runs in 424 plate appearances over the past four seasons, isn't a good way to summon a three-run homer even if he does have the platoon advantage against Joaquin Benoit. Calling upon Ayala, who's been struggling lately and is nowhere near the caliber of pitcher as the more well-rested David Robertson or Rafael Soriano, to hold a deficit at three runs is an even more defeatist move.

Consider what Girardi had at his disposal in the first case (all stats for 2011 against righties, * = lefty hitter):

If you've decided that a three-run homer is the only way you're going to get back in the game — a fallacious assumption, but let's roll with it — isn't it better to choose a guy with a homer rate higher than 1.3 percent? Down four runs with two on and one out in the seventh, the Yankees had a 12 percent chance of winning according to the WPA Win Expectancy stat. That's not good, but it's not so hopeless you have to grasp at the Chavez straw.

Despite the Tigers' 77-0 record when leading after seven innings this year, their bullpen is fallible. Jose Valverde may have gone 49-for-49 in save opportunities but he took four losses in tie games, and has been good for about four or five blown saves a year during his tenure as closer. As a Tiger he has walked 4.4 per nine over the past two years, which is a recipe for disaster. Joaquin Benoit had a 5.85 ERA through the first two months of the season before ironing himself out. The run the Yankees scored upon him via Curtis Granderson's was the first since August 2, but you might as well tape an "Imminent Regression Ahead" sign to his butt. On Saturday night the Yankees lit up Al Alburquerque, who surrendered his first home run of the season. This unit can be gotten.

The Yankees have an offense that grants no quarter, but Girardi all but waved the white flag by calling upon Ayala, looking ahead to the future of the series instead of trying to win a still-winnable game. "We still have two more games in a row, in a sense," he said afterwoards. "And we're down three. If we get it down to two, we were going to make a change. Being down three runs and you know what Valverde has done all year long, we decided to go to Ayala." All in all, it was a maddening pair of decisions, doubly so given that the Yankee offense nearly proved Girardi wrong even with his mistakes.

• In my preview, I identified Jorge Posada as the Yankees' secret weapon based upon his success against righties, and he's been just that. In eight plate appearances he has three hits, including Sunday's unlikely triple, and two walks, for a line of .500/.625/.833 While it would be nice to find Montero some at-bats in this series, there's no reason to sit Posada when he's this locked in.

• The low point of the series came when Yankee fans booed Alex Rodriguez for his popup in the eighth inning. Yes, he's 0-for-8 on the series while batting cleanup, the lone Yankee starter to go hitless, but that's not justification for booing. The guy has been battling injuries for more than half the season; remember, he played hurt through Derek Jeter's injury, and hit 356/.418/.458 while the Captain was on the DL. He's playing at less than 100 percent, but it's not as though he's giving less than 100 percent effort, or doing more to harm the Yankee cause than other players (Jeter had the game's low individual WPA at -.204, and that doesn't even include his pivotal error; three other Yankees, including the men on either side of him in the batting order, had lower WPAs than A-Rod's -.043). Doubtless those booing fans were the same ones sitting at field level until the rain returned, then leading the stampede to the covered concourse, the definition of fair-weather fans. They should be booed themselves.

• Game Three starter CC Sabathia hasn't been great at Comerica Park, but the 0-3, 6.00 ERA line h has in three years as a Yankee amounts to all of three starts, with a 17/2 strikeout-to-unintentional-walk ratio in 21 innings undone by a few extra homers. Sabathia pitched there plenty as an Indian; in 14 starts he has a 4.30 ERA and a 4.01 FIP; not great, but not something to throw yourself into the Harlem River over. He's been rocked for 12 homers in 92 plate appearances there, but when you consider the park's spacious dimensions — 345 feet to left, 420 to center, 330 to right — that's more likely a sample size fluke than anything else.