A Silver Lining in the Clouds?

Share All sharing options for: A Silver Lining in the Clouds? 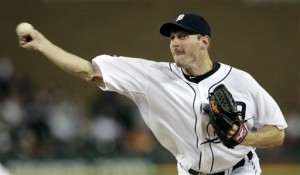 Max Scherzer's home/road splits suggest that a start in the Bronx could work to the Yankees advantage. (AP)

CC Sabathia threw 27 pitches over two innings, one of which ended up over the right field wall. Justin Verlander threw 25 pitches, one of which skipped away from catcher Alex Avila, allowing Derek Jeter to reach base; he would come around to score thanks to a walk and a pair of groundouts. Then the skies opened up, and after an hour or so of thumb-twiddling, Major League Baseball officially suspended the game with the score 1-1 in the middle of the second inning. Play is set to resume tonight at 8:37 PM, and as I write this from the Yankee Stadium pressbox, the tarp has just been put away, though rain chased the Tigers off the field mid-batting practice.

The rain has caused both managers to juggle their rotation plans. As I wrote over at Baseball Prospectus, by the time of the brief post-suspension press conference, Tigers manager Jim Leyland had made up his mind to bring Verlander back for Monday's Game Three start. Yankees manger Joe Girardi had yet to make as firm a commitment to CC Sabathia. He won't bring his ace back for Sunday's Game Two: "I don't think that's the right thing to do. Just because when you're talking about a real heavy bullpen [session] — this is more than a bullpen. And it's not the right thing to do." As for Monday, "That's something we'll continue to discuss. That's why I said Saturday and Sunday I have. Monday I do not... I'm going to wait to see how [Sabathia] feels Saturday and Sunday. And then we'll go from there."

Todaay, Girardi reiterated that stance: "I'm going to pitch Freddy [Garcia] tomorrow, then we'll go from there. I'll check with CC as I said, each day, to see how he feels. It's very possible CC would pitch on Monday. But I still want to check with him. I mean, right now we look at it, it could be A.J. [Burnett], it could be [Phil] Hughes."

Had the Yankees been willing to bring Sabathia back for Game Two — a tall order given that the extra adrenaline and delay made it more than just a typical two-days-before-a-start throw day — they could have stuck to at least part of their script by bringing him back on three days' rest for Game Five. Now they won't be able to do that, which means they'll need a fourth starter, and neither of the aforementioned two on the roster, Burnett and Hughes, are likely to fill anyone with confidence given the erratic performances we've spent so much time kvetching about all season long.

Game 1B: Ivan Nova vs. Doug Fister. Game Two starters moved up, with no changes in venue, and a bit less stress on the bullpens — since both can go deeper entering at this juncture — unless this game is interrupted as well.

Game 2: Freddy Garcia vs. Max Scherzer. Game Three starters moved up. This could be a break for the Yankees, in that both starters were initially slated to go in the more pitcher-friendly Comerica Park than Yankee Stadium. The flyball-oriented Scherzer posted a 3.80 ERA while allowing 0.9 homers per nine at home, but a 5.23 ERA and 1.9 homers per nine on the road — a fairly extreme split. Garcia's ERA and homer rate were both higher at home (3.98 and 1.1, versus 3.27 and 0.8), though not drastically different.

Game 4: Burnett or Hughes vs. Rick Porcello. Though the Yankees decided to put Hughes in the bullpen for the postseason due to his late-season back trouble, the possibility of him taking the Game Four turn was one for which Girardi apparently reopened the door today. He's not stretched out enough to give the Yankees much length, certainly not 100 pitches, but if either potential starter is needed as a long man before then — and Girardi stressed that the priority is always the game at hand ("I think you worry about today’s game today," he said. "You worry about tomorrow’s game tomorrow. That’s what you do.") — the Yankees will have to adjust accordingly. As for the Tigers, they had already planned for a fourth starter, albeit one who's not exactly somebody to write home about. Porcello posted a 4.76 ERA and a 4.14 FIP, with much of the differencce owing to a .318 BABIP. His superficially encouraging Septembe (five straight quality starts and a 3.55 ERA) owes to a dip to a .278 BABIP; he whiffed just 4.4 per nine in that span.

Game 5: Nova vs. Fister. Both on four days' rest. The Yankees already had Nova lined up for five, with the Tigers planning to bring back Verlander in that event, a decided advantage for Detroit. As such, this is another break in the Yankees favor, which isn't to say that Fister is a slouch given his pinpoint control and groundballing ways. Of course, we'll see how both pitchers fare against each lineup once before then.

Last night I was pretty sure the rotation changes hurt the Yankees more than the Tigers. Today, I'm less sure of that, as I had forgotten about Scherzer's home/road split. I'm not sure it's enough to sway me from the idea that the Yankees have their hands full in this series — I picked the Tigers in five, because the Yankees' advantage as lefty-killers was neutralized — but I would be less surprised if it were the Yankees who wound up as the ones finding the silver lining in this cloud.