End of the Rope for Francona [updated]

Share All sharing options for: End of the Rope for Francona [updated] 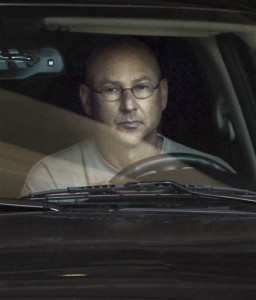 There was a point during Game Three of the 2004 American League Championship Series when the Yankees were handing the Red Sox their collective tuchuses, and all I could think of when the camera cut to Terry Francona was of a beleaguered dad driving a faux wood-paneled station wagon full of screaming children through the rough part of town. Hopelessly lost, stubbornly refusing to ask for directions, and probably doomed the poor schlemiel was. As a Yankees fan, the scene was schadenfreudelicious.

Surrounded by a voracious media feeding a fanbase lusting for blood, some managers might have started slitting throats in public, perhaps even their own. But like rival Joe Torre, that wasn't Francona's style. While never accused of being tactical geniuses, both managers possessed an almost superhuman ability to project implacable composure from within the most severe storm. That "keep calm and carry on" mien would be laughed off as passivity had things unfolded differently, but we all know what happened next. Boston's historically unprecedented comeback from a 3-0 deficit, followed by the franchise's first World Series win in 86 years, bought Francona more leeway than any Sox manager had enjoyed in most peoples' lifetimes. Despite the singularity of George Steinbrenner, the situation was not dissimilar to when Torre led the Yankees to their first World Series win in 1996, and when Francona piloted the Sox to another World Series win in 2007, following a dismal, injury-wracked year in which they missed the playoffs, the length of his rope grew even longer.

Every manager runs out of rope eventually. It is one of the immutable laws of baseball. We saw it happen in the Bronx with Torre after 2007; whether it's a swarm of midges showing up like some forgotten Biblical plague or an epic September collapse that conjures up the ghost of Don Zimmer, every manager is open to second-guessing when he doesn't win, particularly if the men above him believe he's been given the horses with which to do so, and perhaps even moreso if he's set the bar higher by having the temerity to have done so in the past.

That appears to be the case in Boston, though nothing is official at this writing. The Red Sox blew a nine-game Wild Card lead in September, and through a combination of occurrences that one Poindexter estimated at 278 million to one, they let a playoff berth slip through their fingers. Injuries to Clay Buchholz and Kevin Youkilis were the biggest culprits, but Francona wasn't without his tactical sins during that avalanche of misery. Time and again, I've pointed to his refusal to move former Yankee Alfredo Aceves to the rotation late in the year instead of handing the ball to John Lackey or Tim Wakefield; when your rotation puts up a 7.08 ERA in September, you can rightly be accused of fiddling while Fenway burns.

At Over the Monster, my pal Patrick Sullivan, with whom I've been trading online jibes since before the "Curse of the Bambino" was lifted, has an eminently rational take on other Francona decisions that backfired. Meanwhile, the mainstream media is awash in the typical reports that he has lost the clubhouse, the type of unverifiable insider gossip that is used to bolster such cases whenever that managerial rope is coiled into a noose. If indeed this is the end for Francona in Boston, he's sure to rise again elsewhere. Tactical shortcomings and all, a free agent with two World Series rings is somebody against whom most owners and GMs should be measuring their own incumbents. Cubs owner Tom Ricketts is one obvious suitor, particularly if he falls short of poaching Francona's foil, Sox GM Theo Epstein.

The Yankees-Red Sox conflict attained an unprecedented equilibrium on the watches of Torre and Francona, with both men bringing a certain dignity and class to a Hundred Years War that had grown silly with its excessive imbalance. Had the opposing number been a throw-'em-under-the-bus blowhard like Dallas Green or Buck Showalter, he would have been much easier to dislike, and things might have gotten even more out of hand in this age of ESPN-fueled rivalry saturation. At Francona's expense, the Yankees have gained a slight upper hand in the Joe Girardi era; if/when the Sox regain that hand, his successor will get his share of the credit too, merited or not. That's baseball. In the meantime, a tip of the cap from enemy territory to all that Terry Francona — a mensch, not a schlemiel — brought to the rivalry.

Update: It's official, and it sounds as though the decision to part ways was mutual.

At the Division Series pregame press conference, Girardi was asked about Francona's situation:

Q. Joe, being a major league manager, it's such a small fraternity, are you surprised about some of the reports coming out of Boston, it might be the end of Francona? In the big picture is it a reminder what the job can be about at times?

So that's that. It will certainly be interesting to see which way the Red Sox go as they choose a successor. Because of his history in the organization and on Torre's staff, Girardi offered the Yankees some amount of continuity even as he provided some contrast to his predecessor. Given the implications regarding the disconnect between the Sox coaching staff and the roster, as well as that staff's lack of managerial experience, that Boston could undertake a similar transition.