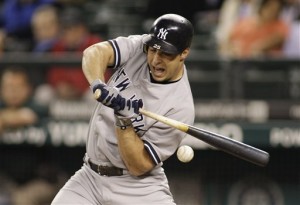 Mark Teixeira is in such a rut from the left side that he's been moved down in the order. (AP)

Yankee Stadium is known for its distinctive short porch in right field. At 314 feet down the line, it's the third-shortest distance in the majors behind only Fenway Park (302 feet) and AT&T Park (309 feet), making it an inviting target for left-handed pull hitters, but such target practice can lead to bad habits. Prior to Tuesday's game against the Rays, Mark Teixeira admitted that had become the case for him, that the porch has been too "appetizing" for the pull-happy slugger.

Because of all this, Joe Girardi has decided to drop Teixeira to fifth in the batting order, essentially swapping him with red-hot Robinson Cano (.317/.364/.561 since the break) while Alex Rodriguez remains fourth. The Yankees have used the Teixeira-Rodriguez-Cano combo 87 times this year, but only 10 times in the second half due to Rodriguez's injuries and the rest-the-regulars strategy since the Yanks clinched a week ago. Teixiera isn't complaining about the move. "I think it's a great idea… I told Joe I'm all for it," he told reporters on Tuesday afternoon. He said that he has been working with hitting coach Kevin Long, squaring up his stance so as to use the whole field more. Long's work with Curtis Granderson and Nick Swisher over the past couple of years has paid off big-time, helping to elevate the Yankee outfield's combined 819 OPS (on 260/.360/.459 hitting) to the league's second-highest.

The move is apparently one that Girardi will consider using in the postseason. Lefty/righty matchups loom large in October, and it's worth noting that the Tigers, who are lined up to face the Yankees because they have one fewer win than the Rangers, have the most righties and fewest lefties likely to pitch in the series, so moving Teixeira down makes even more sense. This lineup positively DESTROYS lefties (*-lefty hitter, #-switch-hitter):

Granderson (.273/.349/.604) and Cano (.322/.362/.538) have absolutely punished lefty pitching, to the point that bringing in a specialist is a no-win situation. Rodriguez has struggled mightily against southpaws this year (.277/.367/.383 with two homers in 109 plate appearances), but spotting a lefty against him still goes against a much larger sample size that's nearly even over the course of 10,000+ plate appearances. Teixeira, as we saw above, has been much stronger against lefties, and Swisher has murderized them as well (.323/.436/.506). The latter hasn't had a good year against righties, though (.233/.346/.421), making for a surprisingly soft underbelly in the middle of the lineup between Teixeira and him when a northpaw is on the mound. Of course, Girardi could rightly decided to move Posada (who has hit a robust .273/.350/.473 against righties) between those two.

Still, this is a team that is just 0.04 runs per game away from leading the league in scoring, and they've done so despite Rodriguez's injuries, Teixiera's slump, and Jeter's dismal first half. A bit of shuffling to put Cano ahead of Teixeira is a welcome move, and if it triggers the first baseman to correct the most glaring flaw in his game, it will pay even greater dividends down the road.