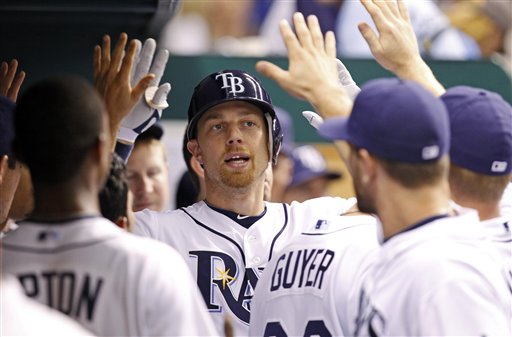 The Rays need to make up a game with just three left to play to force a one-game playoff with the Red Sox for the Wild Card. (AP)

The Yankees gave Boston every opportunity to win Sunday night's nightcap, and it still took the Sox 14 innings and Scott Proctor to do it. Don't expect the Yankees, who arrived in Tampa around 4 a.m. this morning, to try much harder in this series (indeed, neither Mark Teixeira nor Nick Swisher is in Monday night's lineup, with Jorge Posada playing first and Eduardo Nuñez in right field), or for the Red Sox, who are reportedly desperate to acquire someone to start Wednesday's game, to play all that much better against an Orioles team that has won nine of it's last 13 games including three of four against the Sox at Fenway last week.

Quickly, here are the pitching matchups in the Red Sox-Orioles series:

The Orioles won this matchup last Wednesday with Hunter allowing four runs in 6 2/3 innings and Beckett giving up six in 7 1/3. Beckett has a 4.50 ERA over his last seven starts. Hunter, whose line above is as a starter only, has a 4.76 over his last six, a span during which every team he faced had a winning record.

Bedard missed most of September with a bum knee before failing to get out of the third inning in his return on Tuesday. He threw 53 pitches in his unsuccessful attempt to get three outs in that inning, and thus was given extra rest coming into this start. Britton has gone 5-1 with a 3.83 ERA in seven starts since returning to the Orioles' rotation in late August after dealing with some shoulder discomfort, though that ERA swells to 5.73 over his last four starts, all of which came against contending teams.

Simon, whose line above is also as a starter only, has gone 0-2 with a 6.52 ERA in September, though he got there my mixing gems against the Rays and Tigers in among three disaster starts. As for Boston, they could start Jon Lester on three-day's rest in this game, a decision made easier by his throwing just 55 pitches in a disaster start against the Yankees on Saturday, but if a loss would force a playoff game, they'd be better off saving Lester to start that game on regular rest if at all possible. Not that Lester's a sure thing. In his last three starts, he has gone 0-3 with a 10.54 ERA, two of those games coming against Tampa Bay, who would be his opponent in a playoff game on Thursday if it comes to that.

Noesi is making just his second major league start, the first coming last Wednesday in the opening game of a double-header between these two teams. Noesi was a somewhat last-minute spot starter for Phil Hughes, who was scratched due to back spasms. The Yankees had hoped that Hughes would be able to make a start in this series, but it was announced Sunday night that he would not and would only be considered for a relief role in the postseason as a result.

As for Noesi, he lasted just 2 2/3 innings in his previous start, needing 55 pitches to get that far and giving up two runs on a walk and four hits, one of them a two-run homer by Desmond Jennings. That was the most pitches he'd thrown in a single outing since he needed just 71 to get through six innings of relief back on June 7. I imagine he'll be able to throw something like 70 pitches in this game having been stretched out with that last outing, and given the strain placed on the Yankee bullpen by yesterday's double-header, he may well get to throw all 70 of those pitches no matter how hard the Rays hit them. Noesi hadn' t allowed a run, inherited or otherwise, in six innings of relief against the Rays prior to starting against them last week.

Shields has been the third-best pitcher in the AL this season by my estimation, but has lost his last two starts, in part due to poor run support (the Rays scored a total of five runs in those two games), but also by failing to turn in a quality start (going roughly seven innings with four runs allowed in both). The first of those two games was a loss to Josh Beckett and the Red Sox that represents the difference in the Wild Card race entering the season's final three games, so expect Shields to be looking to redeem that loss tonight. Note that both of those losses came on the road, where Shields has a .500 record and an ERA nearly a run higher than his home mark. Sheilds last home loss came back on July 16, also against Boston.

Colon has allowed 13 runs (12 earned) in just seven innings over his last two starts. He has a 6.64 ERA in four September starts, and is 0-4 with a 6.18 ERA over his last seven turns. With Freddy Garcia and A.J. Burnett both having pitched well in their final regular season starts and Colon having worked out of the pen earlier this year, there seems little chance of Colon earning a postseason start, with a strong start here. The more relevant question is whether or not he'll make the postseason roster at all.

Hellickson, who has the fifth-best ERA in the American League,  is the likely Rookie of the Year. He has had a ton of luck on balls in play this season, posting a .222 BABIP, but the correction never came and he has a 2.03 ERA in his last seven starts (with a .188 BABIP!), two of which were Rays wins over the Red Sox. In his last turn, he held the Yankees to two runs on two hits (both for extra bases) over seven innings despite walking four men against just three strikeouts. On the season, he's been a much better pitcher at home, posting an ERA exactly a run lower than his road mark striking out an extra man per nine innings, and lower his walk rate from 4.7 BB/9 on the road to a stingy 1.9 BB/9. Combine that walk rate and his luck on balls in play, and Hellickson has held opponents to a .201/.249/.359 line at home and is 11-for-11 in quality starts at home since the end of April.

Price left his start against Boston two turns ago after four innings and 78 pitches because he was hit in the upper right chest by a line-drive, but he showed no ill-effects from that incident in his last start, striking out seven Blue Jays against two walks in six innings, though he did allow three unearned runs for five total. Still, putting aside the injury-shortened outing, his last start was his eighth quality start in as many healthy turns, and even with the shortened outing included he has posted a 1.93 ERA over his last nine starts while holding opponents to a .194/.269/.258 line over that span. On the season, he has two strong starts against the Yankees and two week ones, but the two strong ones (combined line: 15 1/3 IP, 12 H, 3 R, 4 BB, 9 K) are the two most recent.

Half of the Yankees' six-man rotation pitched on Sunday, with A.J. Burnett and Ivan Nova working the two games of the double-header against Boston and CC Sabathia pitching a simulated game in anticipation of working Game 1 of the Division Series on Friday. Remove Phil Hughes because of his back and Colon for starting on Tuesday and the Yankees' options for Wednesday's starter are Freddy Garcia on three-day's rest or a spot starter/bullpen game. Expect the latter.