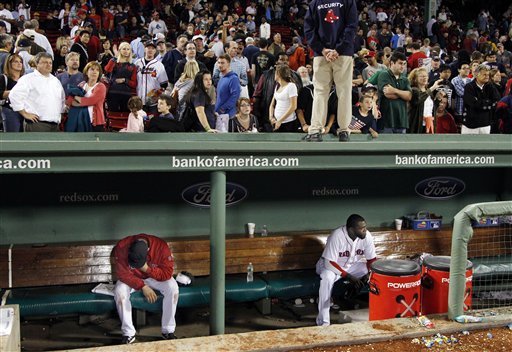 On the morning of August 30, the Red Sox were 82-52 (.612), boasting a two-game lead in the American League East and the best record in the junior circuit. That day, the Yankees came to Boston and took two of three games over the next three days. Since then, the Red Sox have gone 6-17, lost the division, and now hold a mere two-game advantage over the Rays, who took six of seven from Boston over that stretch, for the final playoff spot in the AL.

Over those last 23 games, the Red Sox have continued to hit, scoring 5.8 runs per game, but their pitching staff has collapsed, allowing 6.3 runs per game. Things have gotten so bad that the Sox are now 1-16 in September in games in which they have scored less than a dozen runs (they have scored 12, 14, 18, and 18 in their other four wins, and scored nine in their one win against the Yankees at the end of August).

Josh Beckett, who once again emerged as the staff ace this year, has made just four starts over that stretch due to an ankle injury that cut one of those four short and has a 4.50 ERA in those four outings, including allowing six runs to the Orioles his last time out. Deadline addition Erik Bedard has made just two starts over that stretch due to a bum knee and failed to make it out of the third inning in his return this past Tuesday. Those injuries briefly forced Andrew Miller back into the rotation, but after he allowed 11 runs in 6 1/3 innings over his first two starts of September, Miller was replaced by non-prospect Kyle Weiland, who has gone 0-3 with a 9.26 ERA in those three starts, two of which came against the Rays. John Lackey has a 10.70 ERA in September. Tim Wakefield has allowed 16 runs in his last 16 innings over his last three starts. Even Jon Lester has allowed a combined eight runs in his last two starts, both losses to the Rays.

To make matters worse, ace set-up man Daniel Bard has fallen apart, posting a 12.38 ERA on the month, blowing three saves and taking four losses, one of them coming in the 11th inning against the Rays. Fellow righty reliever Matt Albers turned back into a pumpkin in August, posting a 10.35 ERA over the last two months. Dan Wheeler hasn't pitched since September 7 due to forearm stiffness and gave up runs in each of his last three outings prior to that injury. Even Jonathan Papelbon has gotten into the act, blowing a save against the Orioles in his last appearance.

The Red Sox just can't get outs right now, but it will still be difficult for the Rays to pass them with just six games left to play. If the Red Sox win just one of their remaining games, the Rays will have to go 4-2 against the Blue Jays and Yankees to win the Wild Card outright. If the Sox win both of Jon Lester's remaining starts, and the pitching matchup tonight strongly favors Lester, the Rays would have to go 4-2 just to force a playoff game. That said, my guess is that, even if the Rays run out of schedule and the Sox win the Wild Card, they won't be around to face the Yankees in the ALCS, though given the state of the Yankees' rotation, I tend to wonder if the Yankees will be there either. These pitching matchups aren't pretty . . .

Given his past dominance of the Yankees it's worth noting that Lester hasn't gotten past the sixth inning in any of his four starts against the Yankees this season, just two of which have met the standard of a quality start. Lester has walked 4.4 men per nine innings over his last nine starts with a sub-2.00 K/BB and enters this series coming off a pair of losses to the Rays. Still, he has posted a 2.59 ERA over his last 17 starts and prior to those two games against the Rays twirled a gem against the Blue Jays (7 IP, 3 H, 0 R, 1 BB, 11 K), so the Yankees shouldn't get too cocky.

In four starts since coming off the disabled list, Garcia has allowed home runs at a rate of 3.4 per nine innings (compared to a league average around 1 HR/9) and in three September starts he has posted a 10.95 ERA with six home runs allowed in just 12 1/3 innings pitched. If he pitches well in this game, the Yankees can get one more look at him on the final day of the regular season, but if he doesn't, you have to assume he'll be left off the postseason roster, a shocking development for a pitcher who boasted a 3.16 ERA after 21 starts.

It took the 45-year-old Wakefield nine starts to get from career win 199 to 200, and the game in which he finally got number 200 was a near disaster outing (6 IP, 5 R), though that was still better than his performancein 199 (6 1/3 IP, 7 R). In his last three starts he has allowed 16 runs in 16 innings, though five were unearned. It's very likely that this will be the last time that the Yankees ever face Wakefield, who has been opposing them as a member of the Red Sox since 1995.

This will mercifully be Burnett's final start of the regular season, though it remains to be seen what role he has to play in the postseason. As I wrote on SI.com last night, Burnett could wind up as the Yankees number-three postseason starter by default given the recent performances of Garcia, and Bartolo Colon (0-4, 6.18 ERA last six starts), and Phil Hughes' back inflammation. Jay took a look at Burnett's inability to defeat the Twins' all-subs lineup earlier this week. Burnett has been fooling with his mechanics and has struck out 26 men in 16 innings over his last three starts, but before you allow either of those things to excite you, I have a story to tell you about the deck chairs on the Titanic and a lip-stick wearing pig.

Over his last six starts, Ivan Nova has gone 4-0 with a 1.96 ERA. He had some pretty weak competition over that stretch (the Orioles twice, Twins, and Mariners), but in his last turn he held the surging Rays scoreless for seven frames. He's 8-0 with a 2.94 since returning from the minors and 15-2 with a 3.19 ERA over his last 23 starts dating back to April. I still don't think he's going to win the Rookie of the Year award, and his peripherals still aren't terribly impressive, but given the condition of the rest of the rotation, he has emerged as one of the Yankees most important players.

Erik Bedard will be on normal rest on Sunday, but prior to his first start back from a knee injury on Tuesday, he was served with child support papers, then went out and got lit up by the Orioles, throwing 53 pitches in the third inning before getting the hook with two outs. That heavy single-inning workload has prompted the Red Sox to give him extra rest before his next start, opening Sunday up for John Lackey (0-2, 10.70 ERA in September), Andrew Miller (0-2, 13.00 ERA in two starts and two relief appearances in September), or David Ortiz's favorite pitcher, Alfredo Aceves, who last pitched in relief on Wednesday but hasn't started since June.