Phoning In the Celebration

Share All sharing options for: Phoning In the Celebration 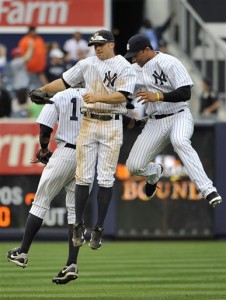 They didn't crack the champagne until after the nightcap, but the Yankees had good reason to celebrate on Wednesday afternoon. (AP)

In my years of following the Yankees — I've been a partial season-ticket holder since 1998, fortuitously enough — I've had the pleasure of attending nearly all manner of clinching games at the two Yankee Stadiums. I was at Game Four of the 1999 World Series when the Yankees completed a sweep of the Braves for their third title of the Joe Torre era. I was at Game Six of the 2009 American League Championship Series when Andy Pettitte and company froze out the Angels. I was at the 2009 AL East clincher as well, when homers by Mark Teixeira and Melky Cabrera backed Pettitte in a win over the Red Sox. For all of those, I've never experienced a clincher like I did on Wednesday afternoon.

If you follow me on Twitter, you're probably aware that Wednesdays are my designated radio day, what I've taken to calling my "Do Shut Up Wednesdays," borrowing a bit from former Baseball Prospectus colleague Joe Sheehan, who has done similar with his "Too Much Talk Tuesdays." Throughout the regular season, I've piled three weekly hits of 10 to 20 minutes into one afternoon, one for Baltimore's WNST, one for Toledo's 106.5 The Ticket, and one for El Paso's KROD, and sometimes I add another one or two. It's a pleasure to gab about baseball with the various hosts, some of whom I've been talking to for years; we try very hard to keep the discussion elevated far above the manufactured outrage of all too much sports talk radio. Not all the hits are are in major markets, but thanks to internet streaming, anyone in any city can listen in; I use Twitter to promote them and make sure my readers can tune in if they so choose.

Once in awhile, I have to take my act on the road. I've done hits not only in front of or deep within ballparks, but outside of restaurants and bars, and even at airport gates just before I boarded flights. During the Baseball Prospectus 2011 book tour, I did one in while sitting in Cliff Corcoran's car at a mall parking lot while he and Steve patiently endured my one-sided conversation. Finding myself in the position of holding a ticket to Wednesday afternoon's game, I took my slate of appointments to the ballpark, and watched in the company of pal Mike Petriello (of the great Dodgers blog Mike Scioscia's Tragic Illness) as Joe Girardi emptied his bullpen like a carful of seldom-seen clowns. Raul Valdes? George Kontos? Where's Jim Bruske? Or Jay Tessmer? Didn't Jim Bouton get invited? Wait, that's Old-Timer's Day…

The clowns didn't clown around, holding Tampa Bay to just two third-inning runs at Hector Noesi's expense via Desmond Jennings' homer. Wouldn't you know it, the Toledo hit fell right when things were getting interesting. I had just done a prerecorded hit for Burlington, Vermont's ESPN affiliate when Eduardo Nunez bopped a game-tying solo homer against James Shields in the eighth inning, but I had to bounce back up out of my seat and down to the upper concourse when Robinson Cano came to bat against J.P. Howell (an ill-considered move given the presence of better lefties in the Tampa Bay bullpen). I positioned myself to watch Cano's at-bat while simultaneously chatting with host Norm Wamer, but as soon as the crowd erupted when they saw that center fielder B.J. Upton wasn't going to reach Cano's line drive, I had to step back from the field in order to continue the conversation. I was still blathering away about the AL's muddled Wild Card picture several minutes later when the opening strains of "Enter Sandman," came up and the crowd erupted; again, I had to back away as I talked our Toledo listeners through the action.

I signed off right after the final out and watched as the Yankees did little more than their usual postgame congratulatory walk-through. They had officially clinched a playoff spot, but they would keep the celebration and the champagne on ice until after the nightcap's victory, which secured the AL East title — an unlikely one, given that out of 45 ESPN experts, not one (including Steve, representing Baseball Prospectus) had the Yankees finishing ahead of the Red Sox; at BP, 29 out of 30 (including yours truly) made the same call. To a man (or woman), we all thought the team's rotation was too fragile for them to surpass the Sox.

But they did, in spite of the ongoing woes of A.J. Burnett and Phil Hughes, the latter a scratch from Wednesday's start due to inflammation that may take any decision about his postseason role out of the hands of Girardi. That's a problem for another day, though; for now, let us enjoy the moment. Yes, the Yankees once again had the game's highest payroll, but the widespread consensus was that money wouldn't be enough to overcome their obvious structural flaws. They did nonetheless, and are deserving AL East champions. Congratulations to the players, the staff, and the rest of the organization — we await your next challenges. 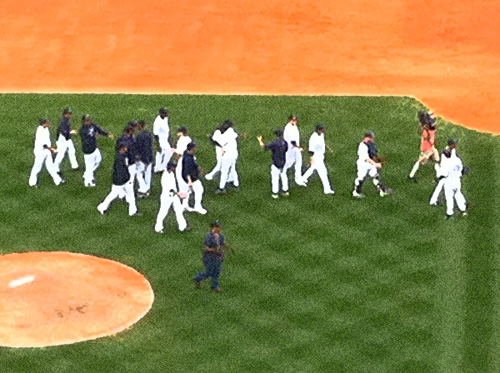