Martin Unmasked As One of the Best

Share All sharing options for: Martin Unmasked As One of the Best 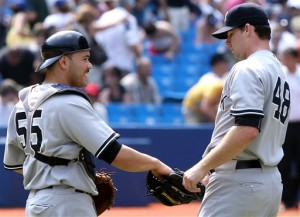 Russell Martin's receiving skills have been a bigger boon to the Yankee staff than expected. (AP)

Today at Baseball Prospectus, colleague Mike Fast published a monumental piece about the effects of catcher mechanics on ball/strike calls, quantifying the impact that catchers have around the margins. It's a first-rate piece of sabermetric research that marries PITCHf/x data with video review, giving Fast — who's been at the cutting edge of such work — the means of providing both rich quantitative and qualitative observations. Here's how Fast explains his work in a nutshell:

Earlier this year, I observed that where the catcher set the target relative to the edge of the strike zone and whether the pitcher hit the target had a large impact on the likelihood of a strike call. Some pitchers, such as Tom Glavine and Livan Hernandez, were consistently able to expand the edges of the strike zone by several inches. The fact that catchers are paired with a limited number of pitchers in a season affects our ability to properly assign credit for extra strike calls to catchers. Adjusting for pitcher-catcher pairing reduces the apparent size of the catcher responsibility for the effect to more reasonable levels.

The upshot for the Yankees is that their recent receivers appear to be at the extremes. Over the past five seasons, Russell Martin's work at framing borderline pitches has been worth an extra 71 runs according to Fast's estimates, a number that ranks second only to Jose Molina; Yorvit Torealba is a distant third at 41 runs. At the other end of the spectrum, Jorge Posada has been worth -50 runs in this particular area, the third-worst of the 45 catchers whose numbers he published. The year-by-year numbers, which control for pitcher-catcher pairings and park effects inherent in the f/x data, trace the deterioration of Posada's receiving skills; the progression from 2007-2010 runs -10, -5, -11, -23. Quantifying on a per-120 game basis, the difference between Martin (+15) and Posada (-25) has been worth roughly four wins a year, and that's without considering pitch-blocking or stolen base attempts, two other areas in which Martin has an edge. Some of that difference may be overstated; left unknown is by how much those numbers need to be regressed to league average to measure persistent skill. Still, if it's even half of what Fast's differences tell us, that's a huge swing.

Fast doesn't say anything additional about Martin, but he does explain some of Posada's shortcomings via his video reviews:

I selected two of the best catchers—Jose Molina and Jonathan Lucroy—and three of the worst catchers—Ryan Doumit, Jorge Posada, and Jason Varitek—and reviewed video of their borderline pitch calls. I observed two primary differences in technique between the good and bad catchers.

Both Molina and Lucroy displayed stable, quiet mechanics when receiving borderline pitches. Posada was the opposite, often jumping, bouncing, and shifting his stance and lunging and swiping to catch pitches. It was almost painful to watch him behind the plate. Varitek and Doumit had more stable stances, but each displayed a negative behavior that appeared to cost them strike calls. (Posada displayed both of these negative traits, and more.)

...I also reviewed five of Posada’s borderline pitches on video. In two cases, his arm and body movements were very exaggerated and potentially distracting to the umpires. In the other three cases, his body and glove were fairly stable (though not perfectly so like Lucroy), but he dropped his head noticeably to follow the ball into the glove. All five pitches were called balls.

Exaggerated glove and body movements are well known to be distracting to umpires...

There's a wealth of other information in the article as well, of course; this isn't light reading, but it is very readable. One thing to think about regarding Martin is that at +15 this year, he deserves a fair bit of credit for the resurgences of Bartolo Colon and Freddy Garcia, both of whom have needed every advantage they can get in resurrecting their careers. When those guys are on, we credit them with pounding the strike zone, but it takes a skilled receiver to harvest those borderline strikes efficiently, and the data suggests that Martin ranks as one of the best in baseball at that. Even with the Yankees seemingly well-stocked for catching prospects, it will be very interesting to see how they value Martin come this winter. The market for him just got bigger.