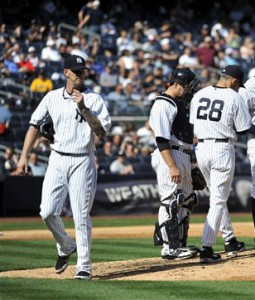 Once again, it fell apart in a hurry for A.J. Burnett. (AP)

During the third inning of Monday's Yankees-Twins tilt, I had the temerity to plop down in front of my TV and begin plonking thusly:

A.J. Burnett's resurgence continues. On Monday afternoon, the mercurial righty continued the dominant stretch he began midway through his last start against the Mariners, striking out TK Twins in TK innings while allowing just TK runs as the Yankees cruised to victory, TK-TK.

Like some two-bit gangster forced to cover his tracks when the heat was on, I didn't just have to bury that lede, I had to drive it out into the woods, force it to dig its own grave, and then pop a few caps in it while it pleaded for mercy. Nobody even noticed the disappearance of poor, poor lede while we all celebrated Mariano Rivera's record-breaking 602nd save, except to note that had it not been for Burnett's meltdown, there would have been no save opportunity on this particular afternoon in the first place.

Indeed, through the first three innings, Burnett was certainly cruising, striking out seven of the first 12 hitters he faced while yielding just three infield singles; meanwhile, the Yankees rolled up a 5-0 lead against rookie starter Scott Diamond. But Burnett began the fourth by yielding a solo homer to Chris Parmalee, then loaded the bases via two hits and a walk before striking out Ben Revere to end the threat. He gave up a leadoff single to Trevor Plouffe to start the fifth, then surrendered a two-run homer to Michael Cuddyer to cut the lead to 5-3. When Parmalee doubled — the seventh Twin out of the last 10 to reach base — Joe Girardi played Captain Hook and pulled his starter.

It's not as though Burnett was facing Murderer's Row. With Denard Span sidelined by a concussion, Jim Thome and Delmon Young traded, and both Joe Mauer and Justin Morneau both shut down for the season after a litany of miseries — apparently, when the Twins built Target Field, they didn't move the bodies, they only moved the headstones — the lineup bore more resemblance to a spring training game than to last year's AL Central champions, with Cuddyer and Danny Valencia the only holdovers from better days, the regulars forced to ride the bus to Sarasota. Still, this season we've seen Burnett struggle plenty against bad teams; the last three times he has been clubbed for more than five runs have come against clubs now under .500 (the White Sox, Twins, and Orioles), and in fact, sub-.500 teams have hit him somewhat harder than teams .500 or above (.256/.344/.465 to .259/.331/.441).

Before he went into his all-too-familiar shame spiral, the mechanical changes Burnett had incorporated over his last few starts appeared to be helping him. Coming into Monday's game, his two highest swinging strike totals for 2011 were in his previous two starts against Baltimore and Seattle, and he netted 11 swings and misses — nine with his curveball — through his first three frames before unraveling in the fourth. But whether it was mechanical or mental — Girardi said Burnett lost his arm slot, which caused his curve to be less effective — the fact that he spun out of control once the going got rough was all too typical of his performances over the last two years. The four runs he surrendered in four-plus innings raised his ERA to 5.28, right on par with the 5.26 he posted last year. He has found his level.

The sad — or perhaps, scary — thing is that with another convincing start or two, the New and Improved Burnett could have drawn consideration for a postseason start, even given the rocky road he's ridden over the course of this season. Freddy Garcia didn't make it out of the fifth inning on Sunday against the Blue Jays, and now has a 10.95 ERA in 12.1 innings over his last three starts, or a 7.85 ERA with a 3.4 HR/9 (!!!) over his last four since his return from the disabled list. Bartolo Colon has a 5.19 ERA in his three September turns, or a 5.45 mark over his last six, Phil Hughes still has a 6.84 ERA over his last four starts…

You can go nuts with the arbitrary endpoints, but the bottom line is that so long as some starters are scuffling, the bloated six-man rotation can be divided into three camps where postseason starts are concerned. You have the Sure Things in CC Sabathia and Ivan Nova; wild horses couldn't drag them away from taking their turns. You have the Scrap Heapers, Colon and Garcia; as well as they've pitched to this point, nobody can afford to take their future work for granted. The fact that they've shown signs of wear lately is enough to open the door for the Upside Downers, Burnett and Hughes, two pitchers who once upon a time appeared to be building blocks for the Yankee rotation and who still infrequently flash glimpses of their tremendous potential, but more often than not give you new reasons to throw objects such as coffee tables and Volkswagon Beetles at your television set.

With 10 games left in the regular season, it appears as though Burnett will get only one more start, on Saturday against the Red Sox and their own $82.5 million boondoggle, John Lackey. An afternoon of thumbscrews, waterboarding, and curdled milk chugging sounds more inviting than watching that pairing, though the Sox, who suddenly find themselves in a real fight for the AL Wild Card, might be less likely to give Lackey the ball after an eight-run Monday night start that pushed his own ERA to 6.49. Twitter could explode if the two pitchers were to face each other, and heads certainly will. Consider yourselves warned.