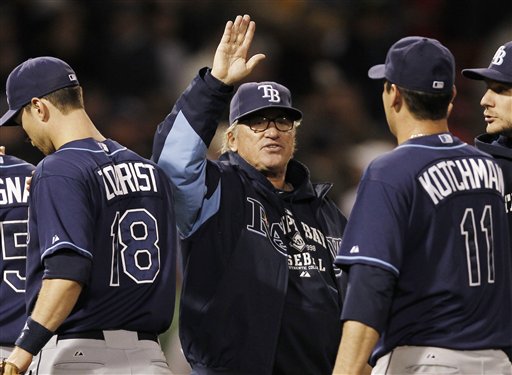 The Rays' hopes of eclipsing the Red Sox for the Wild Card will depend heavily on how they fare against the Yankees over the season's final ten days. (AP)

The Yankees have played at a .593 winning percentage or better for each of the last four months and, with ten games left in the season, they have a five-game lead in their division and a seven-game lead over the Wild Card runner-up. They should be coasting into the postseason, but instead they will be a key player in one of the few remaining bits of drama remaining in the 2011 regular season.

In case you missed it, the Red Sox have gone 6-15 dating back to the Yankees taking two of three from them in Boston as August turned into September, and the Rays have gone 11-4 in their last 15 games, including taking six of seven from the Sox. As a result, the Red Sox have fallen from two games up in the AL East to five games back and are now just two games up on the Rays in what is suddenly a white-knuckle Wild Card race.

The thought of the other two big teams in the division bloodying each other down the stretch with one potential result being a catastrophic Red Sox collapse might have brought a devilish smile to the faces of Yankee fans under different circumstances, but as it so happens, the Yankees ten remaining games all come against either the Rays (seven, including four in the next three days), or the Sox (a three-game set at home this weekend). So, the Yankees can't just fiddle while Boston burns. They, as much as the Rays and Sox themselves, will impact which of those other two teams makes the playoffs. What's more, though schadenfreude might tempt Yankee fans to root for Boston's collapse, their path to the World Series might actually be smoother with the wheezing Red Sox in the postseason than with the surging Rays (though, as Jay has illustrated, being hot or cold going into the postseason has had little historic correlation to performance in the postseason).

That last point simplifies things for the Yankees a bit. With the Rays needing to outplay the Red Sox by three games over the next ten, and with the Yankees being the Rays' opponents for seven of those ten, the Yankees could very nearly guarantee the Red Sox the Wild Card by beating up on the Rays. Indeed, the Red Sox, whose only other remaining opponent is Baltimore, are likely counting on the relative strengths of their respective opponents to help them hold off the Rays.

Here's how those remaining schedules shape out:

As for this week's matchup, the Yankees hold a slight 6-5 lead in their season series against the Rays and have outscored the Rays by seven runs in those 11 contests. The two teams have split both of their head-to-head series in the second half, splitting four games in Florida in July in which no team scored more than five runs in any one game, then splitting two in the Bronx in mid-August before being rained out in the intended series finale, a game that will be made up as part of a double-header on Wednesday.

Speaking of which, let's get to the pitching matchups . . .

As a rookie last year, Davis went 7-5 with a 3.55 ERA over his final 18 starts, which seemed to suggest improvement for this season, but with two starts left in his 2011, he has pitched worse in a season with less run scoring. He has picked up a bit down the stretch, posting a 3.99 ERA and fluffing his weak strikeout rate to a still sub-par 6.6 K/9, and turned in a gem to beat the Sox two starts ago (9 IP, 6 H, 2 R, 0 BB, 8 K), but followed that up with a non-quality start against the Orioles. Davis, amazingly, hasn't faced the Yankees all year, but fared well against them last year (2-1, 3.43 ERA in four starts). Davis is a homer-prone fly-ball pitcher who compliments a 93-mile per hour four-seemer with a curve, slider, changeup, and a two-seemer a couple ticks slower than the primary heater.

Ivan Nova is the Yankees' number-two starter. In his last five starts he went 3-0 with a 2.41 ERA and pitched seven full innings four times. Since returning from the minors, he is 7-0 with a 3.32 ERA in nine starts. He's good, he's dependable, he can battle when he doesn't have his best stuff, he's young, he's healthy, and he's getting better. He's not a stud, and he's not a true front-of-the-rotation pitcher, but he has clearly risen above the rest of the pack hoping to fill in the Yankees' postseason rotation behind CC Sabathia.

matchup analysis for these three games will be posted shortly

If we're lucky, Sabathia will be matched up against James Shields in the opener [Update: no such luck, Hughes will start the day game, Sabathia the night cap, making a split all the more likely]. These two have been, arguably, the third- and fourth-best pitchers in the American League this season (with Shields holding the edge over Sabathia), and had a pair of riveting duels in July, which I imagine most would like to see an encore of this week. In the first of those two games, which Sabathia won at home, both pitchers went the distance with the only run in the game being an unearned run that scored on a Shields throwing error. In the rematch, Sabathia again went the distance, but lost 2-1 with the decisive hit being a Sam Fuld triple. Shields pitched into the eighth in that game, and the only run he allowed came on the final pitch he threw.

Shields has lasted at least seven innings in each of his last nine starts, going 6-2 with a 2.22 ERA and four complete games (one of them a shutout) over that span. His 11 complete games are the highest single-season total since Randy Johnson completed an even dozen in 1999.

Hughes again looked promising against weak competition in his last two starts (12 IP, 10 H, 3 R, 4 BB, 8 K in a pair of quality starts against the Orioles and Mariners), but needs to show that he can hang in against a contender to have a real shot at a postseason start. He did well against the Rays back on August 13 (6 IP, 4 H, 2 R, 1 BB, 6 K), but he has only pitched past the sixth inning once in 11 starts since returning from the disabled list in July and his 4.55 ERA and 6.2 K/9 over those 11 outings have been less than inspiring. Also a concern are the back spasms that pushed his start back from Monday.

Hellickson is the likely American League Rookie of the Year (Nova, I'm guessing, will finish no higher than third). Here's what I wrote about him in this week's Awards Watch at SI.com:

Hellickson beat the Red Sox in his lone start of last week, which fell an out shy of quality, started two of the Rays' six wins against Boston over the past 10 days, has gone 2-0 on September, and has posted a 1.94 ERA over his last six starts. His peripherals remain underwhelming, but he has been tremendously consistent all season, reaching the fifth inning in every start and only once failing to finish it, and allowing four or more runs just three times and as many as five just once. In fact, Hellickson has allowed three or fewer earned runs in 28 of his 31 career starts dating back to his cup of coffee in late 2010. He's not running away with this award, but he'd be hard pressed to blow it at this point. That said, his last two starts could both come against the Yankees, who are the only team to knock him out before the fifth inning all year.

Hellickson has made good start (at home) and one bad one (on the road) against the Yankees this season.

Niemann went 7-1 with a 2.26 ERA in July and August, but has managed just one quality start in four tries, two of them disasters against the Rangers, in September. He has allowed ten home runs in his last nine starts at a rate of 1.5 per nine innings. His only start against the Yankees this year was 7 1/3 strong innings in the Bronx back in early July. He allowed one run on a solo homer by Robinson Cano.

Colon has simply become erratic. The Yankees have no idea what to expect from him from start to start at this point. Over his last eight, he has gone 0-3 with a 4.98 ERA. There were two well-pitched, hard-luck games in there (one a 2-0 loss to the Orioles, one a no-decision after a start in which he didn't allow an earned run in seven innings) and a third quality start, but also two disasters and a third that came close, and two others that fell somewhere in the disappointing middle. Go back to his return from the disabled list and he's 3-6 with a 4.52 ERA and a roughly league-average 6.8 K/9 in 14 starts, including two divergent outings (home and away, the bad one at home) against the Rays.