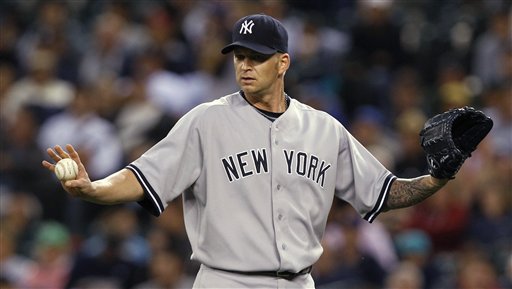 A.J. Burnett: Everybody calm down, I think I'm onto something here. (AP)

I cataloged the Twins miseries the last time these two teams met, so I'll spare you a repeat save to point out that, since that series, Minnesota has shut down Joe Mauer (pneumonia), Justin Morneau (concussion-like symptoms, flu, cyst in left knee, bone spur on right foot, the latter two of which are being removed via surgery today), and Tsuyoshi Nishioka (oblique) for the season, limited Jason Kubel (foot) to pinch-hitting duty, and seen Francisco Liriano spend some more time on the disabled list with shoulder discomfort. The Twins have gone 9-36 (.200) since July 30, far and away the major league's worst performance over that stretch and the Twins' worst performance over 45 games since 1982, the only 100-loss season in Minnesota history. With 92 losses and 11 games left, the Twins have an outside shot at losing 100 this year, as well, and will get there if they continue to lose 80 percent of their games the rest of the way.

This game is a make-up of a rain-out from way back on April 6.

Burnett struck out 11 Mariners against two walks in his last start, holding the M's to two runs over six innings, making that his first quality start and second win since June and, by game score, tied for his fourth-best start of the season and best since June 18. Over his last two starts, he has struck out 18 men in 12 innings and averaged a quality start (6 IP, 3 R). Burnett finished August with a pair of disaster starts against bad teams (16 R in 6 2/3 IP against the Twins and Orioles), but made some mechanical adjustments on the advice of pitching coach Larry Rothschild heading into his start in Boston on September 1, most significantly, starting his wind-up with his hands neck high. Burnett allowed just two runs in that start, fewer than in any outing since June, though he lasted just 5 1/3 innings, and has since followed it up with that barrage of Ks and vaguely quality run prevention. He still has a 4.15 ERA over those last three turns, and in his last start he abandoned Rothschild's suggestion to eliminate his turn away from the batter in his delivery, but with Freddy Garcia getting lit up, Phil Hughes still a question mark, and Bartolo Colon looking gassed, Burnett just might be pitching his way back into the postseason rotation. I'd say facing the hapless Twins should help his cause, but the last time he faced them, a month ago, he gave up seven runs and got the hook before he could get six outs.

The Twins drafted Diamond away from the Braves in December's Rule 5 draft then, deciding he wasn't worth a spot on the 25-man roster at the end of spring training, sent Atlanta Double-A reliever Billy Bullock for the right to retain Diamond permanently. Bullock, a 23-year-old righty, has a live arm, having struck out 12.3 men per nine innings in his three-year minor league career including 11.8 per nine for the Braves Double-A team this season, but, as is often the case, those strikeouts come with a ton of walks (6.2 per nine this year, to be exact). Diamond, who is a year and a half older than Bullock, is a junkballing lefty who matches up well with the Twins' apparent preference for soft-tossing strikethrowers with mid-rotation ceilings. Diamond works primarily with a fastball, change, curve, and slider, all thrown somewhere in the 80s and has come very close to a bare-minimum quality start in each of his five major league outings (range of 5 to 6 1/3 innings, 1 to 4 earned runs), all five of which have come against intra-division competition.

*available as pinch-hitter only
**shut down for the season